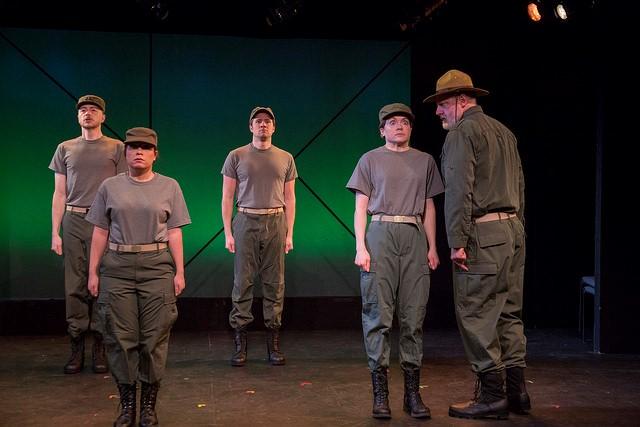 Every year, when spring is in the air, Pittsfield bubbles over with the festival of new one-act plays at Barrington Stage Company’s second space, newly redesigned and enlarged this season. Seating more people and providing a larger playing space, the St. Germain Stage shows us this collection of little shows that has nothing little about it; this is a production of mini-masterworks by a group of very talented playwrights.

As directed by company director Julianne Boyd and her guest Matthew Penn, a very talented collection of artists — six performers, four designers and a wonderful stage crew — bring to life thirty characters impossible to ignore and difficult to forget. Each director gets to helm four plays in each act and one in the other act — five each — and I will address them in that way, more or less.

Julianne Boyd starts the program with “Sandbox” by Scott Mullen, a tour-de-force look at second childishness and the needs of adults to overcome the strife of everyday living. Dina Thomas is the antagonist and Boyd brilliantly gives each participant a moment of absolute ecstasy as their troubles slip away. 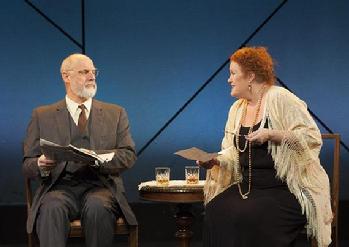 Susan Middaugh’s “When I Fall in Love” brings the brilliant Peggy Pharr Wilson to the stage to give us the emotional catharsis of realization. Playing opposite Douglas Rees whose gentleness and understanding are truly touching, the pair deliver for Boyd a beautiful blossoming of friendship that is hard to overlook.

“Pockets” by Gwendolyn Rice allows Boyd a second shot at what love is all about as Jane Pitsch and Matt Neely discover for each other what the other one already knows. Each twist provides surprises for both audience and characters and the time flies by.

For Allie Costa’s “Don’t Shoot the Messenger, Pigeon” Boyd takes a sardonic tone in a merry comedy of manners and self-interest. Pitsch and Lucky Gretzinger get to exchange the sort of looks that actors love to use, those confusing elemental emotional gazes that sometimes say more than the words behind them. 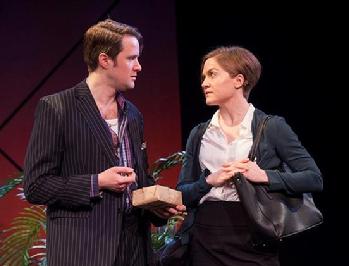 Boyd’s final play is “Desk Fort” by Annette Storckman in which corporate pressure and that distant call of self-protection combine in ways you won’t expect. Pfitsch, Gretzinger, Neely and Wilson manage to fit into the small spaces of life while exposing the big picture that frames their characters.

In the first half of the program Matthew Penn has only one play, ” Dirty Irish,” and it is a doozy! Wilson and Rees, living upper-class lives in the mid-1920s discuss the Irish problem, Sacco and Vanzetti, the 18th amendment and aspidistra in a comedy of manners that moves good manners into a corner and allows those special factors of societal distance to take center stage. The entire cast of this one is brilliant.

The second half opens with “I Don’t Know” by James McLindon, a military viewpoint play that brings the 21st century, and the probable Trump years, onto the stage in a very humorous way which is next to a miracle. 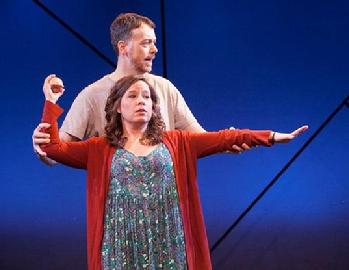 Penn follows this with Suzanne Bradbeer’s quizzical “Broken Window Theorem,” a play that combines the national pastime with higher mathematics and gives Thomas and Neely a chance to show how relationships survive in the intellectual spheres.

The director next takes on the plight of the ignored elderly who have to connive their way into normalcy in a situation perpetrated on them by loving children in Marilyn Millstone’s “Compos Mentis.” Wilson has the best moments, but Pfitsch and Rees hold their own in this precious play about social work, sense and sensibility.

Penn’s fifth play is Tom Coash’s “Raghead.” Here we have two people coping with one another’s quirks while trying to comprehend what the other one is all about. Thomas and Gretzinger pair well in this play, each managing the look of befuddlement before the only sad ending in the evening’s collection.

The very straightforward unit set and its “pieces” have been designed by Managing Director Tristan Wilson and they serve the plays very well, especially as lit by Jeff Davis who gives each little show its own look. In the second half, before the second piece, he presents a beautiful, lengthy and effective dawn which perfectly sets up Bradbeer’s play.

Costume Coordinator Kelsey Vonderhaar has done a nice job of moving the actors from play to play with different looks that work well with their characters. The wonder of sound, designed by Alexander Sovronsky, moves us through the ten plays with perfect setups, music and effects blending into a perfect transition from piece to piece.

All in all this is the way I like to begin spring. New plays that speak volumes in mere minutes. Fine performances that grow characters quickly and definitively. A production to be proud of in a winter landscape that, as it melts, reveals nothing but fine talent at work.

10×10 Upstreet 2017 plays on the St. Germain Stage at Barrington Stage Company’s the Sydelle and Lee Blatt Performing Arts Center at 13 Linden Street, Pittsfield, MA through March 5. For information and tickets, click on The Berkshire Edge calendar go on line at www.barringtonstageco.org or call 413-236-8888.