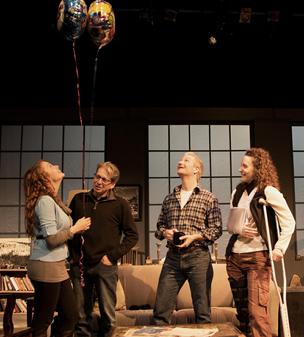 “The camera is there to document life, not change it.”

Photojournalism takes its toll. Lives are disrupted and love is cut off at the knees. For Sarah and James their careers are the great divide in their relationship; she takes the pictures and he supplies the texts. They have done this together and apart for years and now, injured in the Middle East, Sarah comes home and nothing is ever the same again.

Their friend, photo-editor Richard, fails James and favors Sarah and brings along a girlfriend young enough to be their child, marries her and upsets the very delicate applestand that is their friendship. Pregnant Mandy remains maddeningly and judgmentally unaware of her role in the dissolution of three relationships. Life might imitate art, but in Donald Margulies’ fine play “Time Stands Still” on stage at Oldcastle Theatre Company in Bennington, Vermont, art is most definitely presenting a picture of life as it is lived in that world today.

Without humor this play would be a total drag, but the author, director and actors have infused the show with a lightness that makes even the toughest moments of drama into something quite compelling. Jason Guy, who plays James, the writer, has a face that shows every thought in his character’s head clearly and it is his voice and body language that often saves a moment from becoming maudlin. He is a living lesson in the art of acting and his character is also. James can keep his personal secrets like a champion and only when he is faced with no other choice but to blurt out his feelings and reactions does he let what is boiling inside burst through the surface. Jason Guy is a master at this technique; he’s amazing.

As his long-term girlfriend and momentary wife, Sarah, Marianna Bassham is not the same sort of actress. She progresses from critically wounded warrior to woman in charge through the play and her changes are visually striking as she keeps her emotional bombs from flaring up into incendiary levels. When these two are alone together in the superb Williamsburg, Brooklyn loft set designed by Carl Sprague you can practically see sparks jump from one character to another and you can always hear them ker-slapping against surfaces.

Richard Howe is at the top of his game as Richard, their friend, her former lover and the middle-age-crisis guy. The naturalness of his performance is fun to watch, his character is so easy to both like and despise. Howe makes Richard’s devotion to both Sarah and James believable and that keeps him the alter-catalyst in their changing friendship.

The true catalyst of change is young Mandy, played with ease and a wonderful sense of awe by Kristin Parker. In her hands Mandy is always able to move through this world without ever being truly affected by it. Her changes are more physical than emotional, but her occasional outbursts seem to owe more to an innate understanding of the human condition than to true contemplation of the people with whom she is interacting.

Peterson has done a very good job of bringing these real people into his very real set and creating honest marriages of mind and spirit here. Nothing ever seems forced or imposed on this foursome. The director has them in the right space at the right time and nothing really stands still except the reality of how they deal with one another. For all four time has stopped in some ways and the world has moved on without them. Each recovery, at the end of each scene, brings them forward without them knowing what has happened outside their space. They are the world. The rest is memory.

The play is only a few years old but its sense is timeless. Iraq and its people play a role here, but really only a peripheral one for these people could have existed during World War II, or Vietnam, or at any time when a world embattled mirrored the lives of the people who lived and worked on the edges of those battle-filled times. Oldcastle has a small hit on its hands and one worth exploring if you like people who are thick with importance without being important themselves.

For information and tickets go to the Berkshire Edge calendar, contact the box office at 802-447-0564 or go on line to www.oldcastletheatre.org.