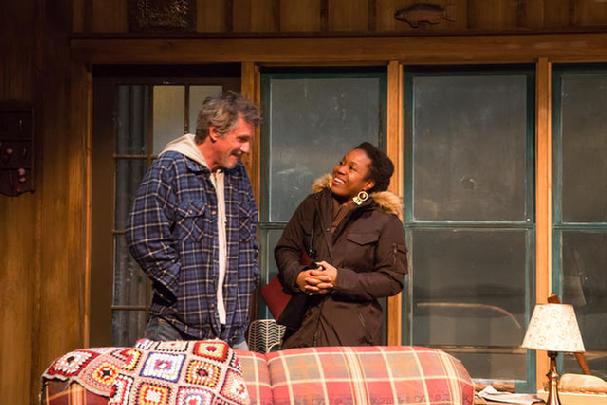 The art of the flirt has not been lost, unlike the quality of life on a man-made lake deep in the country, though not far from the city. This is the situation that confronts Veronica, a nurse who needs to take her kids on a vacation away from the world that confounds them and her. It is Hogan, the man who owns the lakeside cabin she rents, who supplies the flirtation and it comes in a variety of aspects, levels, sizes and meanings. First it’s the price, then the payment schedule, then the number of people and the beds and so on. It’s a practical flirt on his part and a tough one on hers. She needs things; he claims to have what she needs. It’s a flirtation.

Then she takes up residence six months later and she still needs things but they are different, more specific, more essential. The problem is getting what she needs and so the flirtation switches sides. This time he wheedles, cajoles, confronts and confuses. She dodges his emotional bullets and pins him down using hers. It’s still a flirtation.

But when she becomes involved in his difficult situation, the flirtation flips again and he woos her with his inability to conform, to deliver on his promises, to make life livable. These flirtations are grounded in business, need and the immaturity of a relationship that has nowhere to go, to grow, to grovel. All this is just the first third of a 90-minute one-act play, now at the Unicorn Theatre in Stockbridge, Massachusetts, the smallest of the performance spaces where Berkshire Theatre Group produces its theatrical wares. Playwright David Auburn makes the most of the situation he has created for two actors, taking us places we don’t expect, showing us those things we never hoped to see. What this play ultimately requires is two actors who can produce the specific general and make it into the ultra-specific that molds itself into the message we all require: People can need people and their need can generate a singleness of purpose.

Veronica is played by the absolutely fabulous Lynnette R. Freeman. This is an actress who can play half an emotion and make it clean, clear and readable. She can say something directly to her fellow player and move away from him, showing us the absolute opposite of what she has just said. It is a talent to make a statement into two things at the same time. Her emotions ring through her voice, a half-sob-half-chuckle sort of expression that moves you for an instant and then relents and allows her to continue. She shows remarkable alacrity in her almost rants that turn into sweeter expressions of concern when she is really furious. Veronica is not a romantic character, but her way of looking at Hogan makes her the most attractive woman on the lake no matter who else is in the vicinity. Freeman’s performance is so special that it is an acting lesson in a performance and anyone who considers the profession should watch her, take in the technique and then retire to some other sort of work for they will not ever equal what she presents.

Quentin Maré is a different sort of actor. He presents his soul in every line. It is a marred soul, to be sure; at least, Hogan’s soul is marred. The character here is a compulsive liar who believes his own lies and is so sincere in presenting them that even he doesn’t understand the nature of what he is saying. Maré is clear about who Hogan is from his first entrance into the common room of the cabin. He is a man who has always gotten by through his charm and his natural resources. Like the lake itself, he has a purity that cannot be denied even when it becomes clear that he possesses no platform, no diving board, no act of completion in himself, like the swimming dock he never repairs.

Still, his personal abilities easily explain his ex-wife and his daugher, his brother and his sister-in-law, all of whom return his flirts up to a point. Veronica has a hard time resisting him until she needs him to deliver on his promises. Her ultimate involvement in his awkward existence is based wholly on his wonderful way of expressing himself. Maré gives the man and his subtle poetry a naked reality that is irresistible. In Hogan, playwright David Auburn has created a living effigy of a gentleman, an effigy representing the best in human nature buried beneath a troubled spirit who is as far from gentlemanly behavior as you can get.

I loved the dichotomy of these characters. I loved the way they played with one another. I thoroughly enjoyed seeing this play with its perfectly wonderful awful cabin designed by Randall Parsons. The costumes by Hunter Kaczorowski are the perfect frames for Hogan and Veronica. Patricia M. Nichols’ subtle lighting design defines time, place and even time of year. Director Daisy Walker has tightly knitted all of the elements of this play, including its two actors, into a fabric that will hold together in all weather.

Coming very late in the season, this is one of the finest theatrical experiences of the year. I eagerly recommend that you pick up the phone right now – don’t wait – and book your seats overlooking Lost Lake. It’s a beautiful sight.