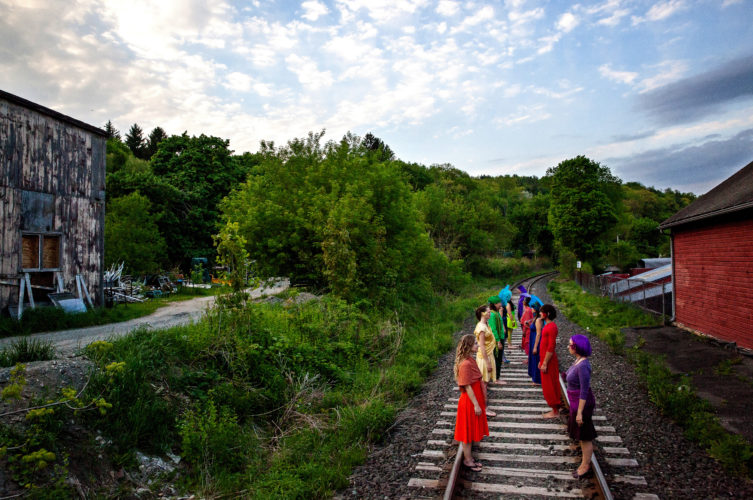 On location with the 'Theatre of Freedom.' Photo by Eric Limon.

If you’re looking for something extraordinary, out of the ordinary, exciting and beautiful, and just plain over the edge on the Fourth of July, listen up.

This is not your customary Independence Day celebration. No fireworks. No pinwheels. No flags.

In fact, what it exactly is isn’t exactly clear.

It’s enough to know that it’s a participatory performance event created by the Rogue Angel, Pooja Ru Prema. It’s called “The Theatre of Freedom,” and she describes it as a “radical theatrical experiment in community, vulnerability and the meaning of freedom.”

Despite the rain on July 4, Theatre of Freedom’s opening day, “the show must go on,” Pooja said in an alert, but in a different spot, one that will allow the audience to be sheltered from the storm.

“The Theatre of Freedom is still on for today! We’ve moved our location to Depot Street in Stockbridge. Not to worry you’ll be safe under cover. Please spread the word and don’t miss this very special performance. 4 p.m. On Saturday and Sunday, July 5 and 6, at 4 p.m., we’ll be in our original location, in a very special place, with a special free performance at 1 p.m. on Sunday.” 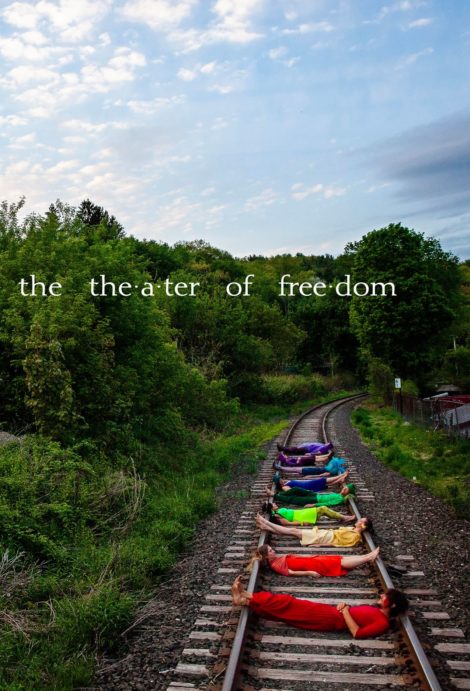 And where is that special place in Great Barrington, on Saturday and Sunday? You’ll have to go to find out.

Here are the directions: Meet at the corner of Rossetter and Main streets in Great Barrington at designated times. You’ll be directed to the performance site (not far away, as you might surmise). Tickets are $20.

“This will be a community celebration and exploration of freedom,” Pooja Ru mused, during an interview. “Theater means ‘the seeing place,’ and this is an experiment for sure. Like ‘Endure’ that I performed in the Green River last month, this is another moving poem. But this time, I’ve never done anything like this. And let’s just say it takes place off the beaten track.”

There are 10 people in the cast, accompanied by three musicians, she explained.

“People in the audience will be tempted, into the performance,” she went on. “And we will have vibrant, vivid, wild colors and costumes. It will be a bit unorthodox for New England which prefers drab colors and a clear separation between audience and performers, between individuals. This is more intimate.”

For this performance, unlike “Endure” for which the audience sat along the banks of the Green River while she performed a silent narrative while standing in the water, the “Theatre of Freedom” will ask that the spectators get involved.

“This will be an experience of what freedom means and what it doesn’t mean,” she said. “We talk about life, liberty and the pursuit of happiness, but what we have is a shallow happiness. Think about it. We’re enslaved. We have wage slavery and debt bondage, and we’re in slavery to an idea of what we think we need to be. What freedom really can be is what the ‘Theatre of Freedom’ is all about. And we’ll get down to it in a fun and happy way.”

For more details and to purchase tickets, consult the Berkshire Edge calendar listing.