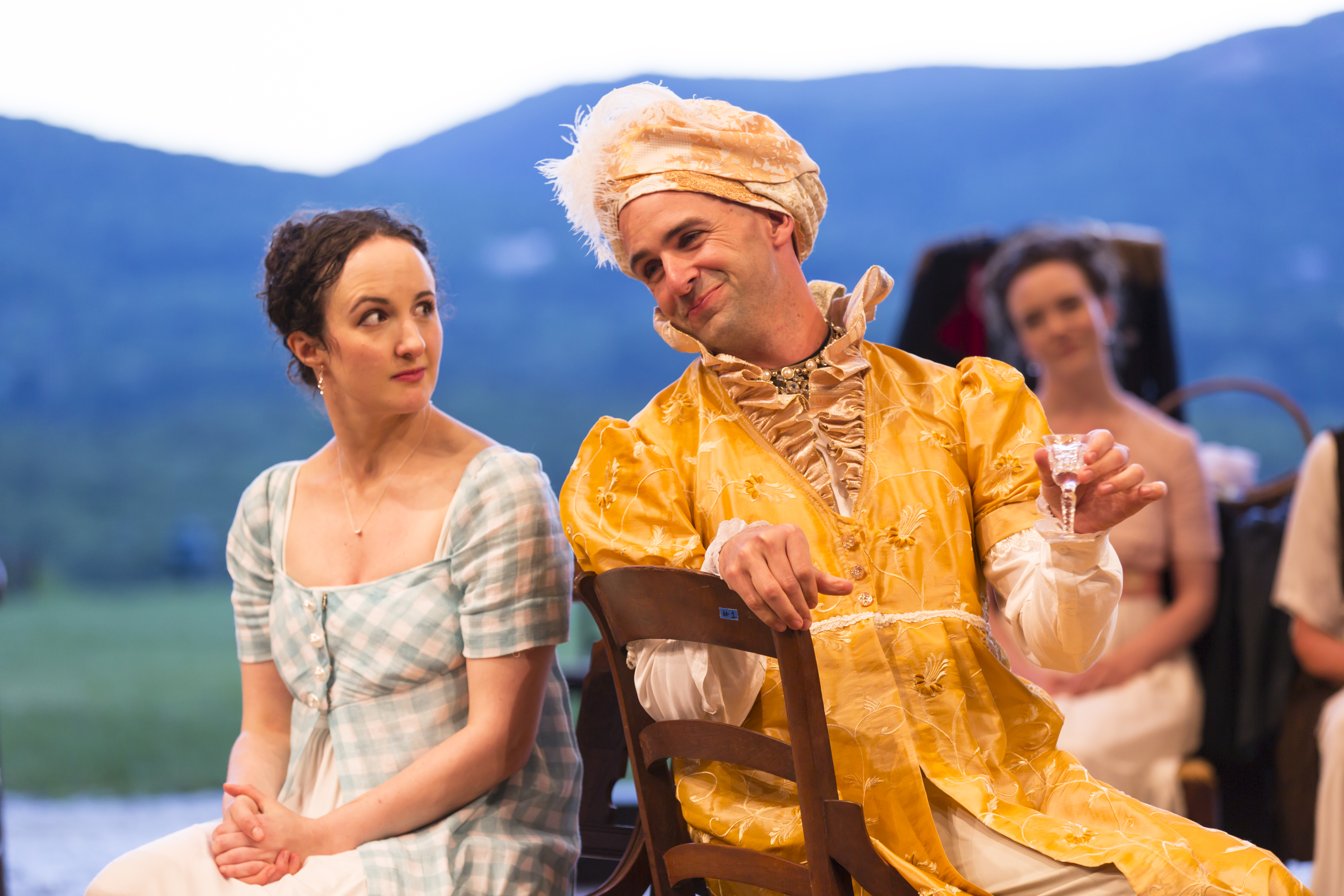 By Kate Hamill, adapted from the Jane Austen novel

From its very start when a wacky Mrs. Bennett, mother to four husband-less daughters and fit-to-be tied about it, comes screaming across the lawn furiously clanging a large, hand-held bell, one knows this PRIDE & PREJUDICE is unlike any adaption of the Jane Austen classic one has seen before. Playwright Kate Hamill, who inventively adapted Austen’s SENSE & SENSIBILITY for Bedlam and most recently Thackeray’s VANITY FAIR at the (now sadly defunct) Pearl, is at it again more riotously, more ingeniously than before. With a rollicking, witty, smart, thoroughly entertaining PRIDE & PREJUDICE in its premier production at the Hudson Valley Shakespeare Festival, Ms Hamill delights with her best work yet, and serves the best summer theater fare anywhere, Upstate, Berkshires — Manhattan, too, for that matter.

Ms. Hamill, who’s cornered the theater market in 19thC Brit lit, doesn’t “cut and paste” novel to script: her adaptations, as with P&P, are about three-quarters her own, a bubbling, contemporized mix of period dialogue and modern idiom. Besides playwriting, in P&P, Hamill plays the stubborn and prejudicial Elizabeth Bennett who detests then falls in love with the arrogant and proud Mr. Darcy played by her real-life love, actor Jason O’Connell.

The rest of the cast — just six, about the most versatile cast one could imagine — share a dozen roles. Each is superb, but the standouts include 18 HVSF season veteran, Nance Williamson as the impossibly demanding matriarch Mrs. Bennett and briefly as the brow-beat servant (in a sly, table-turning of roles). A remarkable John Tufts changes with amazing ease (at one point mid-dialogue) from the Regency-era version of dumb-jock Bingley, suitor to Elizabeth’s sister Jane, to Mary, Elizabeth’s, homely and dim-but-not- dumb younger sister. (Just watch him switch character by readjusting the shock of jet-black hair on his forehead.) The unfailingly comical Mark Bedard, whose Autolycus energized WINTER’S TALE at HVSF two summers ago, does triple duty as Wickham, a peacocked, know-it-all who catches Elizabeth’s eye, Mr. Collins, a pedantic, nerdy, Reverend and Bennett cousin who’s in line for the dwindling estate and most impressively Miss Bingley, Mr. Bingley’s glamorous sister, who uses her beauty and social rank to influence the Bennett misses’ marriage fortunes.

Gender-neutral casting is an earmark of all Ms. Hamill’s work, as is a mix of props contemporary to the early 1800s and modern items: look for a silver punch bowl and plastic toy duck in the same scene. As in S&S or Vanity Fair, actors change costume on stage (sometimes mid-scene), the ensemble breaks into dance, and action, not drawing room dry-as-dust dialogue, rules. Much of this derives from Ms Hamill’s stage direction: it’s how her theatrical story-telling rolls. Under the witty direction of Amanda Dehnert, P&P is looser than the others. That’s a function of the farcical story and the casual venue — thrust stage, tiered seating under a tent, the “backdrop” open to the Boscobel estate lawn and sweeping Hudson River landscape. Dehnert’s direction is kinetic: characters dash in and out of scenes, flee across the lawn or wade right into the audience. Chased by a persistent Mr. Collins, Hamill, with a perky five-foot-plus frame, hides herself by squeezing Elizabeth at the feet of a row of theatergoers.

Elizabeth and Mr. Darcy’s bickering is delicious but beneath all the mannerly insults and decorous quips lobbed about, P&P is a story of true love, with Hamill and O’Connell covering all its emotions, no better displayed than in the “proposal” scene in the second act. Mr. Darcy, babbling non-sensibly about something irrelevant like clocks, finally blurts out his love and marriage request of Elizabeth, who says, in effect, buzz off, not even thanks-but-no-thanks (a decency she even summons for Mr. Collin’s proposal). Never before having acknowledged ANY feeling, let alone love, O’Connell gets Darcy not just stamping his foot in frustration but leaping mid air, landing both feet in a stomping pique. It’s an inspired moment, reflecting a consummate actor working with a confident director.

Getting back to bells… bells are a unifying motif in this P&P — doorbells (who could that be now?), alarm bells (something wrong?), wedding bells (get a husband, quick!), boxing ring bells (the battle of the sexes rages on). Hamill explores the notion of games, too. With a lark, the Bennett sisters and suitors toss around a day-glo green tennis ball, but the whimsy belies the risks of play. Hamill is letting us know slyly that in Austen’s world marriage is transactional sport with the highest social stakes.

Terry Teachout in The Wall Street Journal compares the madcap fun, often slapstick in P&P (for a rain storm effect, an actor throws a bucket of water on a Macintoshed Elizabeth) to the best Hollywood screwball comedies like “Bringing Up Baby” directed by the great Howard Hawks. But beneath P&P’s laughs, there’s a core, more delicate sensibility – a wry, keen awareness that regards, with squinted eye, people warts and all. This P&P is blissful mirth – a special potion of affectionate, bemused cynicism and realistic optimism about human nature, the kind articulated by perhaps the best screenwriter (and director) of all, Billy Wilder. Miss Austen meet Mr. Wilder. Correction: Mr. Wilder meet Ms. Hamill.

P&P, co-produced by Primary Stages, runs through September 4 at the Hudson Valley Shakespeare Festival in Garrison, N.Y. Seattle Repertory Theatre will present it with a different cast, directed by Amanda Dehnert, from September 29 – October 30. HVSF’s premiere production with original cast will open at Primary Stages in Manhattan in October.