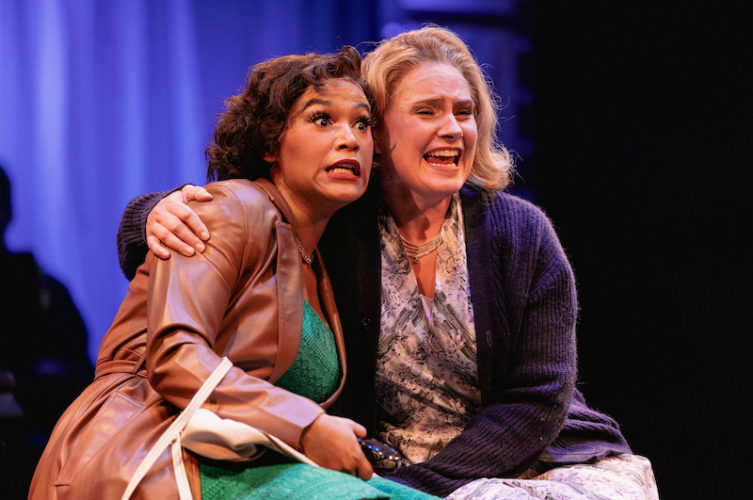 “I can remember you remembering the happy time.”

When I think of musical theater writing teams, only a few come to mind: Lerner and Loewe, Rodgers and Hammerstein, Gilbert and Sullivan, and Kander and Ebb. There have been others, but not any real teams, writers who could almost be conceived of as a singleton. Kander and Ebb hold a special spot in my heart and my mind: I knew them both. I adored their works and saw them all: the good, the bad, and “Kiss of the Spider Woman.” I saw this revue in New York in 1992 and rode home on the 104 bus with its star, Karen Ziemba. This time, at the Mac-Haydn Theatre, I relived that experience and loved everything about this new, re-thought production. The show covers Kander and Ebb’s most successfully productive years, 1965 through 1984. In this version, with “…Spider Woman,” it includes a hint of what was still to come.

The company consists of six performers from this season’s ensemble and two leading players, Kylan Ross, the title actor of “Pippin,” and Gabe Belyeu, this season’s “Man of La Mancha.” They each have wonderful solo moments and act and sing their way through wonderful numbers. With them are Liz Gurland, Erin Spears Ledford, Amber Mawande-Spytek, and William Taitel. The time period covered in this show includes many shows written for, or starring, Liza Minelli, and so much of her special material is heard here. One song, “Colored Lights,” from “The Rink” is sung by Gurland with sweetness and a nostalgic essence that is matched by lovely lighting from Andrew Gmoser. Another Minelli hit, “A Quiet Thing” from Kander and Ebb’s first show, “Flora, the Red Menace,” is well-performed by Mawande-Spytek. Her rendition highlights one of Kander’s most sensitive and memorable melodies.

In the second act, Ross and Mawande-Spytek perform a lengthy tap routine that would ultimately make Astaire and Rogers proud. It is another high point in this joyous show which showcases the multiple talents found in this company. Every song has much to recommend it.  Not only theater songs, but hits from films and television specials are littered throughout, including those from “Funny Lady,” “New York, New York,” “Liza with a Z,” and more. Even their one pop song, “My Coloring Book,” makes a much-appreciated appearance, sung by Ledford.

Ebb’s witty and sophisticated lyrics, perfectly underscored by Kander’s music, constantly rock the show with laughter. One such song is the duet “The Grass Is Always Greener” from “Woman of the Year,” sung by Mawande-Spytek and Gurland. This is just one example. There are so many more, but the sad songs rival the comic ones. “Maybe this Time” from the film version of “Cabaret,” sung by Gurland, and “Sometime a Day Goes By” from “Woman of the Year,” sung by Ross, are moving and melancholic. Taitel brings all the pathos possible to “Chicago’s” “Mr. Cellophane,” without dragging it down.

Pure comedy is not lost in this show. Sometimes it is mimed rather than sung, but it is always consistent with the song being showcased: Belyeu in “Ring Dem Bells” for example, or the entire company at tempo in “Coffee in a Cardboard Cup” from “70, Girls, 70.” Belyeu extolling the glories of his love, “Sara Lee,” establishes both types of comedy in the same number. The actor who just finished playing Cervantes/Quixote gives us his deeper self in the title song of “Kiss of the Spider Woman.”

This show is just a pleaser. You cannot go wrong investing a few dollars and two hours of your time seeing this one. It will be playing in repertoire with “Beehive: The ‘60s Musical” every weekend for the rest of this month. So, check the listings before you come to the theater.