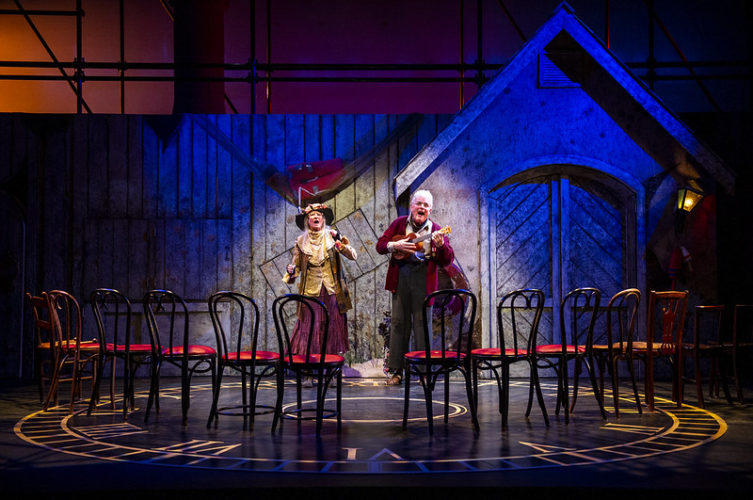 The Chairs
Shakespeare & Company in Lenox
Written by Eugene Ionesco, in a translation by Donald M. Allen
Directed by James Warwick

Absurdist comedy is not absurd. A form created in the late 1940s in a bombed-out Paris, it brought to bear the philosophy that no matter how bad things got, they could always get worse. And that was good. Ionesco’s “The Chairs,” now on stage at Shakespeare & Company in Lenox, Massachusetts, takes that to a fare-thee-well.

An Old Man and an Old Woman live in a rundown lighthouse on a remote island. They are alone in the world. Their only son — real or imaginary — does not visit them. They still have his pram, which is their only souvenir of his childhood. And they have chairs, lots of chairs, which they set up for public occasions. On this particular day, the two 90-plus-year-olds are expecting a crowd, coming to hear a famous orator speak on some subject of great interest. They are also planning a personal move, which they’d rather not discuss. For this new production, director James Warwick has “shaped” the play, removing a third character who, it was felt, would drag the play down to the maudlin level, which was not where he wanted it to be. The excision works to the advantage of the play and makes the two dotty persons more definitively in charge of their odd little world. What is left is an even more absurdist edition of the play that brings honest comedy, rather than offensive parody, to the forefront.

Malcolm Ingram is delightful spouting non-sequiturs and lines that reach into the depths of the soul. He is almost desperately real as he plans events, recounts moments from his life, and thinks out loud about past, present, and future. He often adopts a look that speaks volumes and brings a surreal comic sensibility into the work. This is something he does often and it never grows old. Just as you think he’s done it often enough, he does it again and it gets the needed laugh. He is a master at this and young actors should study his technique. Ingram plays this role with sharp understanding of what it means to be both absurd and obscure simultaneously. Oh, for the time to see this performance often!

As his precious partner in life, Barbara Sims’ Old Woman juggles affection and affectation with style and grace. The love and loyalty she feels for Old Man is clear in every line and gesture. There can be no doubt about her feelings or her view of their relationship. She is an ideal for Ionesco, of love, marriage, and simple, honest relationships. We are given the impression she has never disagreed with Old Man, nor made her own choices or decisions as to their life path. They are joined in every fashion, and if she sees any alternatives for herself, she must not push her thoughts onto him. It is her responsibility to support him; that’s just how it is. And it’s absurd. Sims plays all this with an honesty that makes it seem reasonable. She takes into account only what she hears and sees from Ingram’s Old Man. This idealized marriage is almost too absurd, and when the play’s final moments arrive, they arrive with a bang. Sims makes it all believable and her fine performance brings credence to Ionesco’s absurdities.

If this play has a message for us today, it is a simple one: do not ignore what love creates; it’s right. The two actors make this overwhelmingly clear in just 68 minutes, but a good 68 minutes. Everyone should spend this minimal amount of time with old folks who work their way through a lifetime together. John Musall’s set remarkably turns the limited space into a mansion of myriad containments. The costumes designed by Charlotte Palmer-Lane give us reality for him and fantasy for her, a perfect juxtaposition. The lighting created by James Bilnoski and Amy Altadonna’s sound design work together brilliantly to keep Old Man’s beliefs alive and well.  Stage manager Hope Rose Kelly has as much to do with the success of the play as do the actors. For all three, timing is everything and that is the not-so-secret secret to successful comedy. Everyone on the Shakespeare lot should spend some time seeing this play just to learn that lesson. Warwick’s vision of the play aligns with the talents he has worked with here and the result is pure delight. See it.

“The Chairs” plays at the Tina Packer Playhouse at Shakespeare & Company, 70 Kemble Street, Lenox, Mass., through October 31. For tickets and information, call the box office at 413-637-3353 or visit the website.