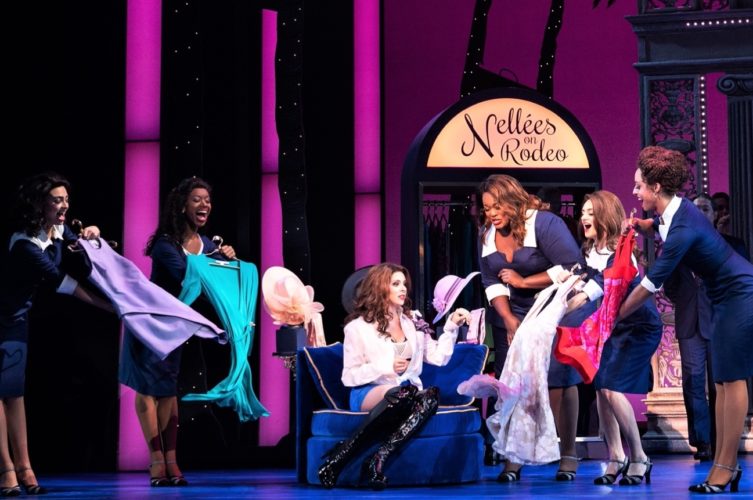 Olivia Valli as Vivian (center) and the company of "Pretty Woman: The Musical," on Broadway. Photo by Matthew Murphy for MurphyMade.

Vivian Ward lives with Kit De Luca, a streetwalker who has brought Vivian into the “life” and has trained her in the ways of that world. When Vivian meets Edward Lewis, a billionaire who needs a girl for a week to accompany him on official visits with his intended victims and his official board, her life completely changes. That’s the plot of “Pretty Woman: the Musical,” now on stage at Proctors Theatre in Schenectady, N.Y. It’s pretty much the plot of “Pretty Woman,” the 1990 movie with Julia Roberts and Richard Gere in the two principal roles. Their roles are taken by Carissa Gaughran and Adam Pascal, and these two lack what Roberts and Gere brought to the roles, an enigmatic excitement, a genuine compatibility that this show really, really needs in spite of Director/Choreographer Jerry Mitchell’s fine work.

The show was a modest success during the COVID-19 seasons in New York but never made it to the original cast album stage. Pascal was in it then, and he is touring with it now. He’s fine, but the show itself suffers from a second-rate score which provides terrific music to dance to—and dance they do—but offers little character growth in its lyrics which impedes the show’s success. A musical needs to make its points in its songs and these songs fall short of achieving that. But dance they all do, and the dancing is the most fun in the show until the middle of the second act when Verdi’s “La Traviata” takes the stage. Musically it is so different from the score of “Pretty Woman” that it is jarring, but at least it provides a moment for Vivian to realize how much her life parallels fiction and for Edward to discover how his life parallels that of the opera’s hero. They become a modern Violetta, and Alfredo and that changes everything.

The opera characters were beautifully sung by Jade Amber and Jonathan Young, and Kit was played with verve and gusto by Keyonna Knight (Knight and Gaughran are understudies, by the way). Other supporting roles are well defined by the actors: Jordan Alexander plays David Morse, the intended victim of Edward’s manipulations, with total honesty and reality while Trent Soyster brings a wistful dancing focus to the Beverly Hills Hotel hallboy, as Happy Man, a Hollywood tour-guide, and narrator who also assumes the role of the hotel manager. Kyle Taylor Parker is a delightful performer in this role which parallels similar roles in “Pippin,” “Something Rotten,” and at least half a dozen other Broadway musicals, all played by Black actors of superior talents. This show never introduces anything truly new to its production.

In the movie, Gere’s Edward slowly realizes his interest in Vivian, but in the musical, there is an abrupt change to his perspective. It is an awkward bump on the road to a romantic conclusion. And once again, the songs don’t help the transition. He sings a weak reprise of his first act song, “Freedom,” instead of something new which would aid in his emotional change. It’s a pity because Pascal definitely has the ability to give us more of the character’s mental realizations. Similarly, the stage Vivian is never as sensitive as the film’s Vivian, and when she sings “This is My Life,” perhaps the best song in the score, Vivian is denied the human heart she should be unburdening.

A hint for lovers of the original—don’t leave during the curtain calls. Once they are over, the original song, “Pretty Woman,” written by Roy Orbison and Bill Dees, is performed by the company and it is a wow!, so much better than the show’s own score.

“Pretty Woman: The Musical” continues through November 13 at Proctors, 432 State Street, Schenectady, NY. Tickets are available by phone at 518-346-6204 or through the theater’s website.