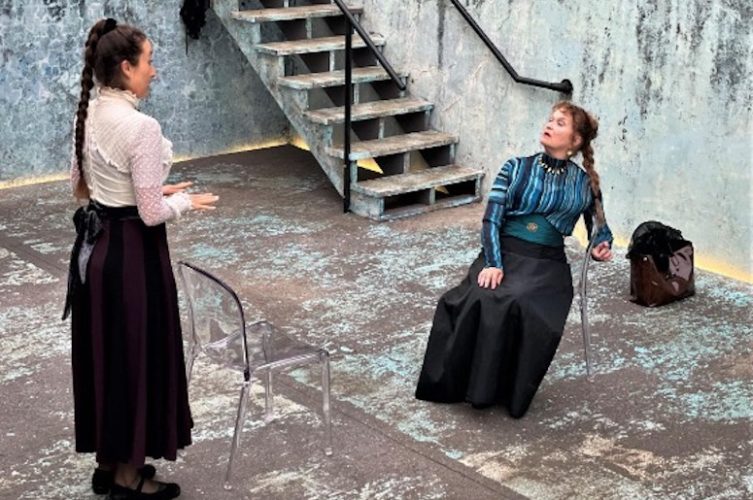 “Knowing I’ve done really well, what do you think I do?”

Nora and Torvald Helmer have been separated for 15 years, ever since she walked out on her marriage, husband, children, housekeeper, and life in her Norway hometown. She has only looked back recently out of necessity, and that new need has brought her back to the door she slammed behind her so long ago. Faced with the realization that things are never really ended until you properly end them, she has to resort to the strings that bind her and cut them once and for always.

Her initial, slightly forced joy at reuniting with her former nanny Ann Marie — now her husband’s housekeeper — starts this comedy-drama, a relatively new take on Henrik Ibsen’s characters seen by me for the third time in three years. Set in the ancient swimming pool on the property of the Park-McCullough House Museum in North Bennington, where the Living Room Theatre performs, the play’s performers are ringed above by the audience, virtual gods looking down over the world below, watching these people as closely as possible and waiting for them to fail, as usual, in their quest for personal perfection.

Perspective makes a difference to us above as it does to Nora below. She begins to see the mistakes of a lifetime lived by her own standards, though she adamantly refuses to see hers as such. We see the errors of her ways less as mistakes than as ill-fated choices that have brought her a deeper understanding of the world she inhabits. Torvald sees little of these new pieces of his world as he sets out to correct his own errors, only to complicate his infallible decisions with a fervent lack of judgement. When the ending of this play comes, we Gods applaud these mortals for acting with conviction even if they lose themselves in the process. But it is a comedy; no one dies. It is a drama; everyone is exhausted. It is a comedy-drama; we laugh, we cry, their lives will go on, and they might even have a mutual third act where the swimming pool gets painted, the cocktails are perfect, and the parties are terrific. It’s just too early to tell.

Allen McCullough is wonderful as Torvald. His resonant high baritone has the ring of sincerity and resolve in it. You believe every word he says. You empathize with him from his first entrance to his final moment. There is always the ring of truth kept sealed in his words. His offer of help to Nora, though greeted with derision, feels genuine and generous, not a hand-out but a recompense for any and all previous errors. This is a perfect part for this actor; no one has done it better justice.

Ann Marie is played by Janis Young, whose physical fragility belies her forceful performance. A woman of mixed emotions, Ann Marie cannot resist the woman who was her first child cared-for, but also cannot condone the woman Nora has become. Her own reality staggers around the Helmer house and its front parlor as she searches for answers. Young handles this to perfection. Even when Nora’s ideas get under her skin and she pipes out expletives in “new-woman-style,” Young’s Ann Marie maintains a surprising dignity. This is really good stuff and gets every well-deserved laugh.

Eighteen-year-old Emmy, Nora’s youngest child, is played by Gaia Visnar with conviction, her youth and innocence masked by determination and early-onset adulthood. Up in the gods, we watch this child match her mother gesture for gesture, idea for idea, belief for belief. What emerges is the sense of the girl in the woman and the woman in the girl. Visnar mirrors Randolyn Zinn’s Nora to perfection, showing us how much DNA plays a role in development when propinquity plays no part. This actress delivers her dialogue as a soliloquy, which is exactly what Nora would do, and the effect is absolutely delicious.

The pool’s surface, however, belongs to Randolyn Zinn. Her portrayal of the mature, immature Nora is a lengthy joyride of acting. She lets us know, almost from her first line, that Nora is acting the part of Nora. From on high, we discern the early truth: Nora has a mission and that means acting the role of a Nora who doesn’t yet exist. She has grown as a person, but she will not allow herself to be seen by someone to whom she cannot, must not, show any weaknesses. There is just no way that Zinn’s Nora can relent; her goals are set and must be satisfied. Zinn plays Nora’s strengths with a bravura sensibility. She hides weakness, but sets it out for a sudden squashing two or three times, only to jerk it back and away at the last minute. This is more than a performance; it is a performance of a performance, a struggle for any actress brought to active life in this swimming pool of human natures.

I don’t know who chose the pool, but it was inspired. It is rare that an audience has such an interesting point of view on the characters of a complex play. It has given the director, Kirk Jackson, nearly unprecedented opportunity to stage things with psychology that is second to none. Most of the important scenes in any play are traditionally arranged to be seen center-stage. This gives the moment importance. In this edition of “A Doll’s House, Part Two,” those scenes are set in the deep end of the pool. Everyone has a clear view of faces, hands, feet; body language speaks to all the Gods on high; nothing distracts. Costume Designer Sarabell Wrigley’s excellent clothing can be seen from every angle except down-under. Jackson moves his characters from deep-end staircase to the wader’s perches, from corner to level-drop at just the right moments. The chairs on the set are inappropriate clear plastic Swedish modern, an indication of Nora’s life-voyage and possibly Emmy’s growth pattern for her future. We are the gods and we can decide these things for ourselves.

Rain has cluttered this production and there are only two shows left this week. Now is the time to book your limited seats for Friday and Saturday. I’d say, don’t wait. Call right away. You don’t want to miss this one. I was canceled twice for weather. Pray for sun.