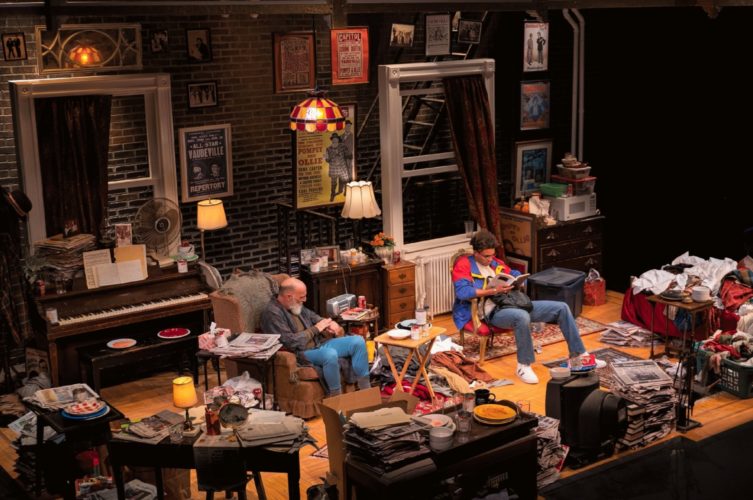 The Set by Theron Wineinger with Glenn Barrett and Logan Slater Photo by Oskar Ahlstrom.

Shakespeare and Company, renowned for their productions of 16th century plays, has put on a thirty-year-old play by Charles Smith and created a world premiere production of that author’s total rewrite of his original play. Treating himself as he would a student, he tutored and tortured the “author” in re-envisioning the original work until he had developed this new version. In a week of plays about difficult relationships with handicaps, Smith’s play gives us a new look at the professional side of relationships and how the difficulties in work, as the workers begin to age, affect the work itself. Pompey, played by Glenn Barrett, is forced into time alone with Jet, played by Logan Slater, and the two men have to find a way to communicate and to relate to one another’s intrinsic problems. They do this on one of the greatest, messiest sets ever created.

Pompey is one half of a long gone pair of vaudevillians known as Pompey and Ollie, Ragtime Piano Comics. Ollie is dead and his partner vacillates between taking his own life and recreating his past. His occasional caregiver, his daughter Marsha, introduces Pompey to her ward, whom she is considering adopting and is responsible for the two men’s time alone together, a decision she ultimately regrets.

The play is riddled with humor, both the joke-routines of Pompey and Ollie’s old act, and the natural humor of the current situation: Pompey can’t find his pants and his daughter is appalled at his dependence on Spaghetti-Os. Played by Kristen Moriarty, Marsha is an extremely vulnerable and dependent human being who refuses to rationalize her need for her father’s approval and his acceptance of her decisions for him. Moriarty is wonderful at showing us her character’s desperation and her simultaneous attempts to keep this from both Jet and Pompey. It is Jet’s impetuously sullen attitude that brings Pompey out of his isolation and gets the play onto another level. As Slater shows us Jet’s need for a male-bonding, deprived as he is of his own father’s company, it becomes clear that Pompey, a miserable father to Marsha, is also in need of a son to renew his long-lost partnership with Ollie.

Ollie himself, or at least his ghost, played with panache by Kevin G. Coleman, intrudes on Pompey’s new world to reassure the living man that nothing works better than the original, and nothing ever will.

Think “The Sunshine Boys” with real drama instead of star turns by the players and you have what Smith has written and Raz Golden has beautifully directed. This play works on so many levels that it is difficult to adequately build a picture of it in seven hundred words (my usual parameter). The company is sensational; the director is incisive; the production is pitch perfect for giving the audience what it needs to get the picture in 80 minutes. It is yet another hit in a week of hits, each about the difficulties people overcome in creating and maintaining perfect interactions with one another in spite of their own circumstances. See this while you can.

“Golden Leaf Ragtime Blues” plays on the Elayne P. Bernstein stage at Shakespeare and Company, 70 Kemble Street, Lenox, MA through October 30. For information and tickets call 413-637-3353 or go to their website.