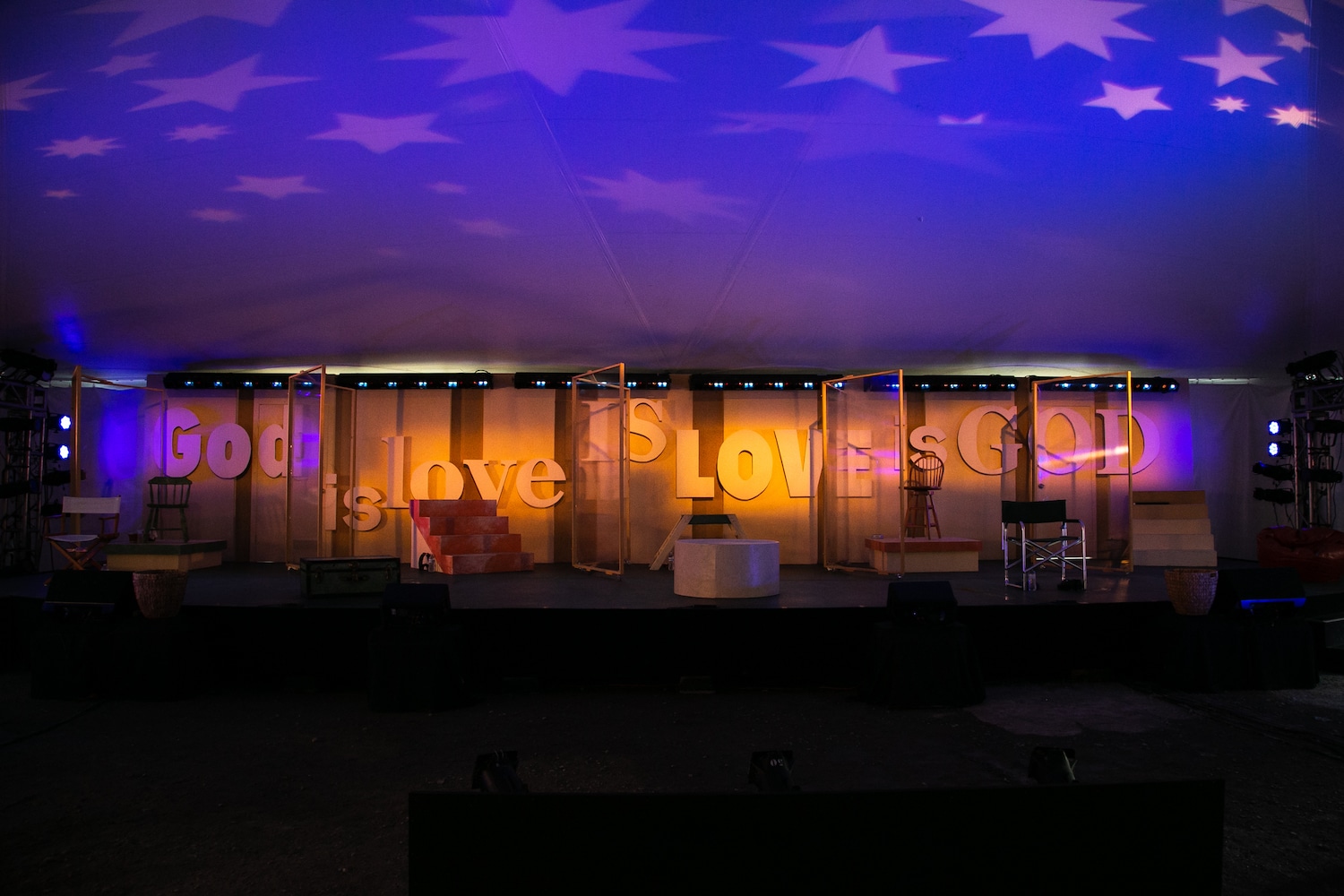 Editor’s note: This review will be running in the next issue of Blickpunkt Musical, Germany’s magazine on international musical theater.

Ghost lights stand dull sentry on Broadway and theaters all over the United States, but their collective glow converges in a blaze of musical theater revival under a tent in a small city in the Berkshire Hills of western Massachusetts. Berkshire Theatre Group, operating in its 91st year the oldest summer theater program in the Berkshires, has produced a timely, wondrous new production of “Godspell,” the first Actors’ Equity-sanctioned full musical production in the United States since the closing of Broadway theaters on March 18 and the enduring pandemic since.

Under the intuitive and ingenious direction by Alan Filderman, this “Godspell,” based on the teachings of Jesus as retold in the gospels of St. Matthew, unfolds not just as moral parables but as parables of the pandemic. The youthful cast of 10, racially mixed and of gender parity, enter the stage masked, led by Jesus (Nicholas Edwards), all clad in variations of denim (except Jesus in white line, South Asian style). After taking safely distanced positions — some behind full-height clear plexiglass panels — these “disciples,” in a format that recalls “A Chorus Line,” talk intimately about their life dreams, professional and personal, and how they were interrupted by COVID-19. The toll of quarantine is laid bare in universal, human terms: anger, anxiety, loneliness, withdrawal, abandonment, feeling fragile and inconsequential. “I fear bringing COVID to my parents,” says one cast member. “I lost jobs… plus (having) suffered from addiction brings back old feelings,” admits another. With the double whammy of COVID and the murder of George Floyd, another says, “if you’re not screaming Black Lives Matter, you’re denying it … I’m sick of racism.” Their voices rise in raucous cacophony. A bugle call — the first musical note of the production — pierces the air. This “Godspell” isn’t just the folksy, feel-good take on the New Testament that first appeared off-Broadway in 1971. It’s a clarion call of the times, COVID and all. As is. Now.

The original book by John-Michael Tebelak always seems to weigh productions of “Godspell” down: the folk/pop-driven score by the up-and-coming Stephen Schwartz, who went on to compose “Pippin” and the huge international hit “Wicked,” gave it its spunk. At BTG, Filderman and his cast have peppered the original book with contemporary references like Zoom calls, Walmart, $1,200 stimulus checks and maneuvers like elbow bumps. Queries one disciple: “In quarantine, why am I making sourdough bread for no reason at all?” Some lines are ad-libbed: At the performance I saw, an understudy, before beginning his solo number, jokingly pleaded to his fellow cast “Be nice. This is the first time I’ve done this.”

As much as these improvisations loosen up the book, given the safeguards put in place by Actors’ Equity, it’s amazing that Filderman’s stage movement is as liquid as it is. The broad stage, with a backdrop of “God is Love is God is Love …” in relief, accommodates five players on slightly elevated platforms above the five players in chairs of various design and vintage in front. The scenic design by Randall Parsons, by itself, is a tour de force in how design can overcome unnatural restraints.

When an actor moves from his/her “pod” to another, the movement is subtly logisticated so that safe distance (at least 6 feet) remains observed. Sounds clumsy but it’s not: Cleverness prevails. Director Filderman and choreographer Gerry McIntyre are at their wittiest in Act 1’s “All for the Best,” a vaudevillian duet where Jesus and his nemesis, Judas (Tim Jones), face off. From opposite sides of the stage, they apply hand sanitizer, don straw hats, slip on blue latex gloves, and shuffle with yardsticks instead of dance canes. As they approach, they nose-to-nose their extended yardsticks. Voila: Six feet — literally — of safe distancing between them, all the while executing a classic music hall routine with sly, Fosse razzle-dazzle.

The band is spare: keyboard, guitar and drums, but vocals, at which the cast excels, and novel musical arrangements revitalize Schwartz’s well-known score. “Day by Day,” the show’s most popular tune, shines anew in a new, bilingual version with Spanish, the native language of the performer who shared in the show’s precis her Latin heritage. Some of Talebek’s original book gets rapped, with ensemble hand-and-foot a cappella percussion. The lovely anthem “All Good Gifts” gets signed by the ensemble. The showstopper in Act 1 goes to a saucy Kimberly Immanuel, who combines full-on tap while belting out “Learn Your Lessons Well.”

Beloved New Testament parables — the prodigal son, the good Samaritan — the ones we learned as schoolchildren (and not necessarily Christian schoolchildren, as Christianity has so permeated the culture) continue interspersed with song. The original “Godspell” with its hippie-styled, counterculture, folksy interpretation of the Gospels cleaved the tenets of these parables from organized religion. This “Godspell,” begot of intertwined pandemic and social upheaval, compels us to look at their moral — yes, spiritual — core. Jesus instructs his disciples “Do not become overcome by evil but overcome evil with love.” Corny? Sappy? As the current U.S. president, who has no truck in (disdain for, in fact) the arts and humanities famously quipped, “What do you have to lose?”

The most arresting of composer Schwartz’s melodies comes in Act 2 after Christ’s Last Supper (recited in part, appropriately, in Hebrew) with the lush, soulful “Beautiful City” where Jesus preaches hope: “… when you trust is all but shattered … you can give up bitter and battered or you can slowly start to build … a beautiful city … not a city of angels but finally a city of man.” BTG’s “Godspell” concludes with a stirring musical arrangement that melds “Beautiful City” with the anthem “Long Live God.” My only lament is that its musical refrain didn’t last longer.

ADDENDUM. Besides the artistic merit of “Godspell,” BTG’s site management during COVID-19 deserves favorable review. As of mid-August, Massachusetts public health regulations, beyond banning public gatherings in inside spaces, still limits outdoor public gatherings. BTG erected a tent, 60 feet by 90 feet, on a parking lot adjacent to the Colonial Theatre, a restored 1903 structure that it operates on Main Street in downtown Pittsfield. All ticket holders had their temperatures taken before entry and asked for a phone number if contact tracing were needed. Inside the tent, which was open-air on three sides, the audience area was about 60 feet by 60 feet. Seating was customized in singles or in groupings of two to four folding chairs for parties dedicated to its own. Omnidirectionally, each seating arrangement was at least 6 feet from any other. The stage was 25 feet away from the nearest audience seating. At the performance I attended in early August, there were 83 patrons, all of whom kept their masks on throughout the entire performance.

At this proscribed scale, the reason for production is not commercial: It’s survival; it’s purpose. BTG’s origins go back to the Berkshire Playhouse in Stockbridge, founded in 1928, on which stage the likes of Katherine Hepburn, Eva LeGallienne and James Cagney performed. Says BTG artistic director and CEO Kate Maguire: “We have done theater coming up on 100 years. We have a responsibility. We are not going to close. And we will not miss our time to come together even at this particular time.”