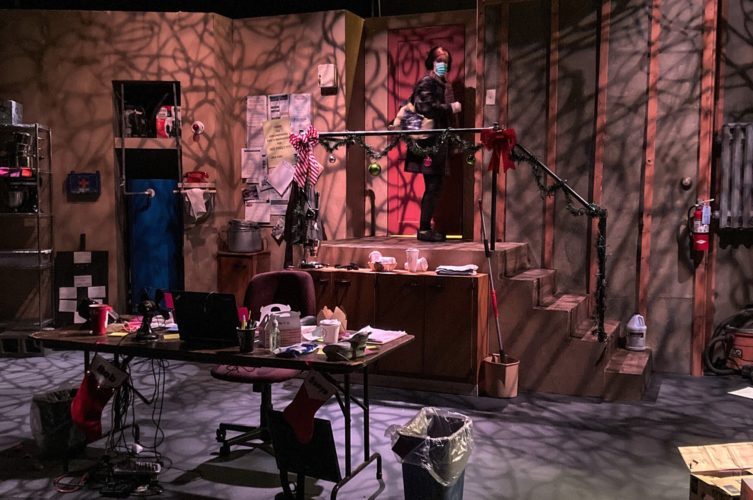 Sam Callahan is an actress supporting herself in New York City working as a reservations clerk at a very exclusive, very trendy lower east side restaurant. Everyone important, or partially important, or hopefully important wants a table there. Sam talks to all of them, as well as to the major staff: chef, maître d’, head waitress, hostess, staff coordinator, and others. She does this while dealing with a family crisis, other actors, and friends. She is a very busy young woman who seems never to get off one phone or another. Her whole work day goes by in a flash, or so it seems. Sam, in the current production at Bennington Performing Arts Center, produced by Oldcastle Theatre Company, is played by Allyson Boate. She also plays the thirty-nine other characters Sam deals with in her day at work. I have been seeing this play everywhere for years; this is my eleventh production. It is, however, the first time I’ve seen it played by a woman.

It seems right to be played this way. More than half of the other characters are women. Allyson Boate gives each of them her own voice, stance, personality and she does the same for the men that Sam talks with. I have watched very talented men take on this challenge and do very well with it, but this is the first time that the female voice has been so well represented. Boate is, to put it mildly, terrific. In the rapid fire dialogue between Sam and several other people she never misses or mistakes one personality for another. She is precise and correct and very funny as one after another intrudes on the ongoing conversations. She never mixes them up. She stays true to the character she is representing in her telephone or intercom chats. It takes a talent, at a mile a minute rate, to keep this all straight and keep the audience in touch with the personality being presented at any given moment.

And in spite of the rampant confusions that entangle Sam’s day, Boate is lividly and vividly on top of it all. Facts about Sam’s life and her work and her loves and her professional aspirations tumble over the phone lines. The telephone, that instrument that used to be a perfect medium to divulge background in a play, serves a different function here. It is the device that reveals every secret Sam might be heir to in her day’s work. Boate is beautiful as she spills the goods under the excellent direction of Jennifer Jasper. The director has taken a play that gives its sole on-stage character enough to do just talking and has her also cleaning the room she works in while taking care of business, personal business and, ultimately, public toilet business as well.

The outstanding set has been designed by Richard Howe; Jennfer Marcoux has found the right clothing for Sam, and Jessica Winward has lit the show most appropriately. Cory Wheat has provided ideal sound effects for the play. Stage Manager Kristine Schlachter has a busy show to call, and she handles it all extremely well. I think I have to stop with production number eleven. I doubt that any production can be better than this one with wonderful design, excellent direction and, I’ll say it again, an ideal actress in the 40-plus roles Boate plays. Don’t miss this one.

“Fully Committed” plays at the Bennington Performing Arts Center, 331 Main St., Bennington, Vermont through July 31. For information and tickets call 802-447-0564 or go to the company’s website.