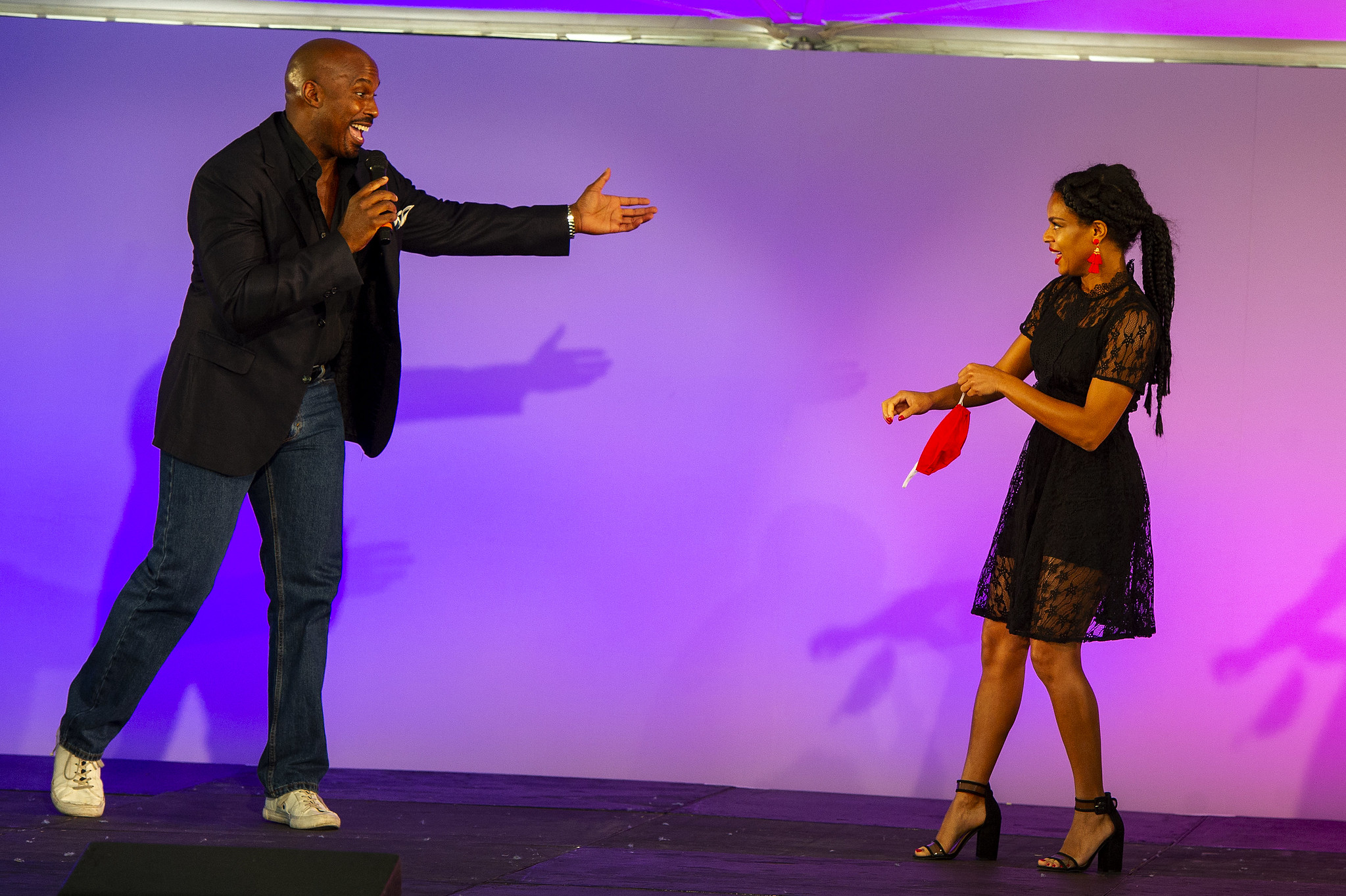 Alan H. Green and Storm Lever in the Barrington Stage Company production of 'The Hills Are Alive With Rodgers & Hammerstein.' Photo: Daniel Rader

If I had to define the ideal summer stock experience, it would be Rodgers and Hammerstein on steroids. The two creative gentlemen who redefined the American musical back in 1942 with their first professional collaboration of “Oklahoma!” have provided summer theaters in the round, in tents, in auditoriums and gymnasiums with shows that presented the American experience to an American audience that needed constant reminders of who we are and who we have been with an eye to the future of who we’ll be. “State Fair,” “Carousel,” “South Pacific,” “Allegro,” “Flower Drum Song,” “Me and Juliet” and “Pipe Dream” all offer us glimpses of American society at work. “Cinderella,” “The King and I” and “The Sound of Music” give us glimpses of world affairs as interpreted by the American mind and heart. R&H did more than just reduce the traditional chorus number opening to a single voice unaccompanied from offstage. They changed the focus of a musical show from being more than girls legs and sexy comedy to eye-opening views of humanity seen and heard in songs that tugged at the heartstrings of personal memory: operetta grafted to revue schtick carried on the backs of real people in real situations. Barrington Stage Company is reminding us of all this with a brief, 71-minute overview of their oeuvre.

In solos, duets, a trio or two, and ensemble opening and closing numbers, the five-person cast of “The Hills Are Alive …” bring us examples of the output of these two talented men who first collaborated on a few songs for a show at Columbia University: “Fly With Me,” in 1919. Their work then took them onto different roads to the same destination with other partners. Rodgers’ principal collaborator, Lorenz Hart, becoming more and more difficult to work with, ultimately turned down the Theatre Guild play “Green Grow the Lilacs” by Lynn Riggs. Seeking an alternative lyricist, Rodgers reunited with Oscar Hammerstein II and a new era in musical theater quickly evolved from this look at the Oklahoma Territory before statehood. Hart finished one more show with Rodgers and then tragically died, leaving the composer free to continue with his new teaming, which ultimately altered musical theater forever.

Onstage at the Tartell Family Outdoor Stage in Pittsfield is Julianne Boyd’s pandemic tribute to the team of Rodgers and Hammerstein. Its five talented and attractive cast members represent the cross-section of Americans that its authors wrote about and/or direct on our local stages: handsome men, attractive and/or quirky women, Hispanic, African-American, other. The songs chosen for the show are principally among the best-known of the team’s output, with a few that may be new to our current audiences. Among those is the one quoted above at the start of this review: “The Sweetest Sounds.”

It is from “No Strings” (1962), the first Broadway show Rodgers wrote after the death of Hammerstein four years earlier. The lyrics are by Richard Rodgers as well as the music, and its words, ironically, reflect the sentiments of Hammerstein with the wit and sophistication of Hart, a perfect amalgam of their joint and individual input over the years between 1924 and 1959. The song begins the finale medley, which the audience is not really prepared for, as it follows one of the greatest theatrical musical moments — the ideal finale — “Climb Every Mountain” from “The Sound of Music,” which has been attached to the last lyric Hammerstein ever wrote: “Edelweiss,” an emotional tug.

Alexandra Silber and Storm Lever have curious voices, the former verging on operatic and the latter smaller than usual with a tendency to swallow the ends of words. As a result it is sometimes hard to appreciate the nice jobs each does on certain songs. Silber, for example, delivers “I Cain’t Say No” so quickly that the jokes get lost. Lever also sings “You’ve Got To Be Carefully Taught” at a breakneck speed. This is just wrong for those songs. Otherwise, Silber — a tall, slender and beautiful woman — does a stunning “Hello, Young Lovers” and “People Will Say We’re in Love.”

Lever, singing “It’s Me” from “Me and Juliet” at the start of the show rocks the stage with her dancing of Shea Sullivan’s intricate choreography. Her version of “Something Wonderful” was effectively offered with great sensitivity. The two women together sing the “Stepsisters’ Lament” from “Cinderella” with verve and snap, which unfortunately eliminates much of the humor in the lyric. Humor has been sacrificed to sentiment, which is a shame in these pandemic times.

Wylder Cooper’s lighting design consists mainly of color washes on the upstage scrim, and while they don’t always reflect the song being sung, they are strikingly effective. His work is echoed by the costume supervision of Caitie Martin. The women wear one costume each, all of them so different that they clearly are meant to define each performer’s personality. The two men in the show have one costume change each, going from dressy to not so dressy — Nicholas Rodriguez’s change is actually commented on by Alysha Umphress. Eddy Mineishi’s sound design work is my least favorite technical job, as the singers swallow their mikes and are often not clearly heard over the four-piece orchestra, beautifully conducted by Darren R. Cohen.

While truly an ensemble show, two stars do emerge. The first is Alan H. Green, whose bright personality and lusty baritone voice capture the hearts of the audience. He is terrific: That’s the best word for his onstage presentations. Whether doing a comic turn or being romantic in a ballad or duet, he hits the right note every time.

The romantic figure, Rodriguez, doesn’t deliver as well. His lilting tenor or lyric baritone voice soars but his work is almost too “pop/jazz” to give songs their due. His most difficult interpretation is “You Are Never Away” from “Allegro,” which denies Rodgers’ ironically simple tune for far too much of the song.

However, politics has reared its head, twice, in this show. Three numbers, the first magnificently lyrical in the hands of Rodriguez, clearly reflect on the influence of Donald Trump on our world. I’ll let you guess which ones when you see the show yourself.

The second clear star is Alysha Umphress. It seems there is no song she cannot deliver with class, taste and interpretive know-how. Her first solo, “Ten Minutes Ago” from “Cinderella,” is a solid rendition. Her cross-gender “Surrey With the Fringe on Top” from “Oklahoma” both surprised and delighted me. The romance in “It Might as Well Be Spring,” which she introduced as the only song in the show from the musical film “State Fair” (not true), was gorgeously lush. But it was her glorious “Bali Ha’i” from “South Pacific,” a sensuous rhumba, that clearly cemented her spot at the top of the bill.

Coming close to the end of the show, that dream-song about a place of safety and beauty made even the COVID-19 environment of a masked, separated audience feel perfect and right.

In troubled times, troubled in so many ways, watching and listening to these songs and these people relieves the pressures of the world for at least 71 minutes, and that is a gift to us all. The program, available online but not in person, contains an error that I am willing to forgive but I will make it right, right now. Each song’s arranger is listed right after the names of the singers. Several are credited to Rodgers’ original arranger and orchestrator, whose name is Robert Russell Bennett. Thank you Mr. Bennett for giving Richard Rodgers his most perfect presentations: One by Blossom Dearie and Miles Davis is stunning, and one by Jason Wetzel is pure magic.

This is a grand night of singing not to be missed by true fans of the American musical. Try to see it if you can.

The Hills Are Alive with Rodgers and Hammerstein (they are really Cole Porter’s hills up here) plays through Saturday, Aug. 29, in the tent at the parking lot of the Polish Community Club at the intersection of Linden and Center streets in downtown Pittsfield, Massachusetts. For information and tickets, see the Berkshire Edge calendar, call the box office at (413) 236-8888 or go to barringtonstageco.org.