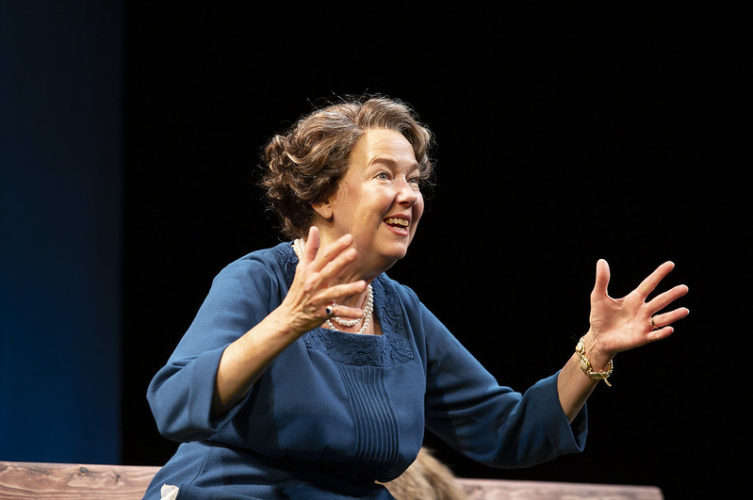 If there’s a better stage drama about Eleanor Roosevelt than Mark St. Germain’s “Eleanor,” in its world premiere at Barrington Stage Company in Pittsfield, bring it on. This excellent, introspective, and consistently compelling, 90-minute solo drama, brilliantly rendered in a searing performance by Tony-winner Harriet Harris, not only affirms the public record of FDR’s wife, but also boldly probes the personal struggles that informed her lifetime of service.

Politically, St. Germain’s script defines unequivocally the relationship between Franklin and Eleanor: he was the head, she the heart. On matters of civil rights (the Marian Anderson–DAR episode is the best), the plight of Jews in Hitler’s Europe, voting rights, workers’ wages — you name it — Eleanor was the heartthrob of steadfast liberal purpose.

Still, Germain’s script is most potent in peeling away the layers of the private Eleanor. His construct is expedient: Eleanor appears in the present day Rock Creek Cemetery in Washington (where her famous cousin Alice is buried) to contemplate her life; she admits her body is elsewhere, “lying side by side with Franklin in Hyde Park.” Her soul is wandering someplace else; the play is really about the unending search for the self within.

Thoroughly researched, but never pedantic or listless — how could it be, in Harris’ hands — the play weaves Eleanor’s memories of her life with Franklin, from their youthful camaraderie as distant cousins to his death at Warm Springs. Eleanor goes back and forth from the public to the private. St. Germain, with his skills as biographical dramatist in high gear, lets Eleanor unwind, so as the drama unfolds, her personal revelations get more personal. After discovering Franklin’s infidelities early on (Lucy Mercer, most notably, among others), Eleanor resolves not to divorce, but realigns the marriage on non-conjugal terms: she will live her own life.

Most interpretive of St. Germain’s treatment is Eleanor’s relationship with her father, the truth of which pains her more than FDR’s wrongs. Near the play’s moving end, Eleanor wonders: “Why can I forgive one (her father) and not the other?” Boldest of the drama is Eleanor’s relationship/companionship with journalist Lorena Hickok; when Eleanor finally comes round to introducing her in the play, she turns to the audience and admonishes, “Let’s stop right there.”  It was Hickok who most intimately challenged Eleanor — wasn’t there something more to life than “to be of use,” Eleanor’s raison-d’etre since childhood.

Harris’ command of St. Germain’s script and Eleanor as a character are astonishing. Her patrician accent is spot on, but Harris also plays more than half a dozen characters, from tough-talking campaign manager Louis Howe, to French headmistress Marie Souvestre, a childish Alice Roosevelt, the fiery Winston Churchill, and more — all the while never losing her voice as Eleanor, i.e. saying the lines as Eleanor would be trying to imitate them. Harris’ stage movement, and deft use of limited props, is no doubt augmented by the fine, subtle direction of her close friend and actor colleague, Henry Stram.

It’s hard to watch “Eleanor” and not be reminded how much public, and private, standards and values have changed since Eleanor’s time. St. Germain’s ending underscores that, to Eleanor, loyalty — on her terms — prevailed.