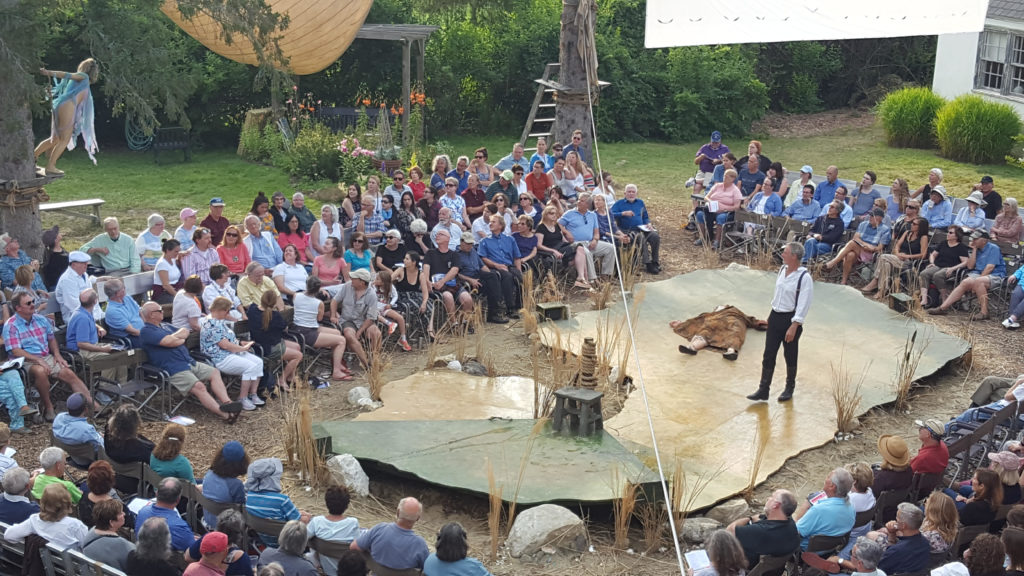 Theater in the Round

You can travel all over this great country and, with the exception of a few major metropolitan areas, you’ll rarely find what we here in the Berkshires take for granted—an abundance of great theater. I’d like to share a few thoughts on what’s going on in area theaters and some of the artists who make the Berkshires such a vital place to live.

I recently talked with my friend actor David Adkins about the upcoming Berkshire Theatre Group production of Naked, the Luigi Pirandello play that starts public performances September 27th at the Unicorn Theatre at BTG. See The Berkshire Edge Calendar for more information. 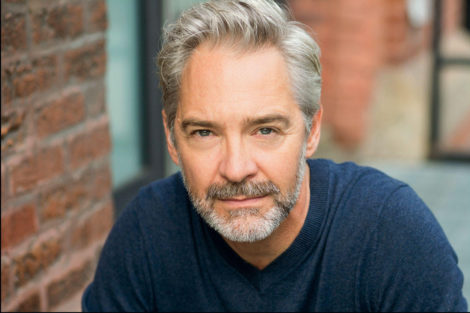 David Adkins will star in the upcoming production of Pirandello’s ‘Naked’ at the Unicorn Theatre.  Photo courtesy of Berkshire Theatre Group.

Frangione: “So David, tell me about this production of Naked that you’re doing”

Adkins: “It’s such an amazing and rare opportunity to work on a Pirandello which is almost never done. There’s never been a Pirandello at BTG, and then Naked? Who’s heard of that?”

Frangione: “Does anyone actually get naked in this play? Do you?”

Adkins: “Only in the dressing room”.

Frangione: “This is sort of a lost play of Pirandello’s, isn’t it?”

Adkins: “Yes, it is. And it has an amazing lead role for a woman.”

Frangione: “From what I’ve read about this play (Mira Sorvino starred in a NY production at Classic Stage Company in 2000) it unfolds as a romantic potboiler, a near farcical comedy, a tale of suspense and a meditation on the slippery qualities of perception.

Adkins: “All of that. One theme Pirandello explores in the play is the objectification of women and the central lead character in a twist at the end takes final control of her own life and body. I hope I didn’t spoil anything.”

Frangione: “Course not. But does Pirandello hold up?”

Adkins: “It does, in spades! Who knew Luigi Pirandello could have been part of the #MeToo Movement. Go Luigi! Go Kate Maguire for choosing it!” 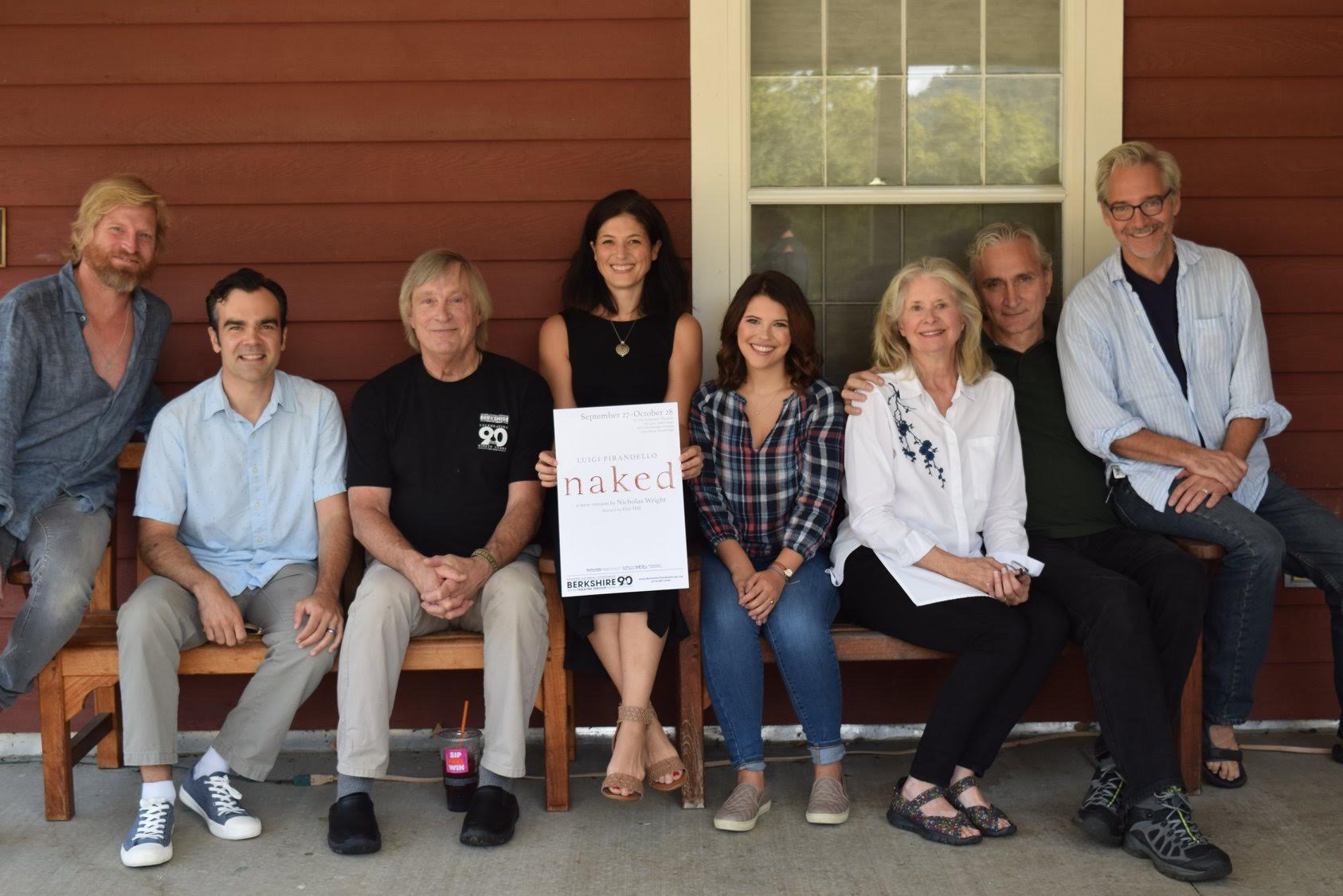 Pirandello, born in Agrigento, Sicily, is most famous for his play, Six Characters in Search of an Author. This version (or adaptation) of the play is fairly new (1987), penned by Nicholas Wright. An associate director of the Royal National Theatre, Wright is an actor and playwright and the author of the celebrated play Mrs. Klein. Eric Hill directs a fine BTG cast, including: Adkins, Berkshire favorites Tara Franklin and hubby James Barry, Rocco Sisto, Haley Aguero, Jeffrey Doornbos and Barbara Sims. It runs through October 28th.

It has been another banner year for Adkins in which he just played the lead in The Petrified Forest, the 1935 Pulitzer Prize-winning chestnut by Robert Sherwood, on the Mainstage at BTG. David’s wife, the talented Corinna May, is another busy Berkshire actor, having appeared earlier this summer in Mornings After Grace at Shakespeare & Company where she’s been acting on the boards there for some 27 years. Where do these two get the energy? I need a kale smoothie with ginko biloba just thinking about memorizing all those lines!

On a side note—Adkins and May are also devoted animal welfare activists and are now fostering two rescued cats, a sweet-faced bonded pair, male and female. They’d love to find permanent homes for the pair, Lady and Buddy. Both have had their shots and are in excellent health. You can email me if you’d like more info on these two cuties—the cats, I mean. 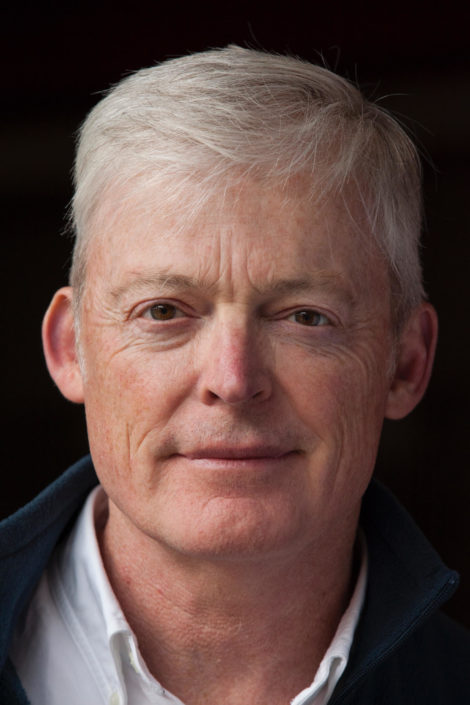 On the Lenox side of things, it seems that the general consensus around town is that Shakespeare & Company has made a sound decision in hiring Allyn Burrows as their Artistic Director. Burrows, at the close of his second full summer season at the helm, has created a superb outdoor performance space, The Roman Garden, where As You like It played this summer to full houses. In addition, he’s shepherded several successful productions into the limelight, including the highly regarded Annette Miller vehicle, Mothers and Sons, directed by the affable and able James Warwick. In a strategic and deft move, Burrows promoted many of the younger company members onto the main stages and breathed new life into Shake & Co’s Lenox campus. It has been gratifying to watch many of the younger members of the troupe move up the ladder. The very funny MaConnia Chesser, Greg Boover and Zoe Laiz have all progressed from Triple A into the big leagues and onto the larger stages. The outdoor Roman Garden Theater has proved a great success for Allyn and his unsung but formidable Managing Director Adam Davis. The best part—they didn’t have to spend a dime on buying a new lighting system because the shows all started at 5pm. Brilliant!

I’ve been having fun watching Kristen van Ginhoven take things up a notch at WAM Theatre these past few years. Her co-production (with Vermont’s Dorset Theater Festival) of the one-woman play, Ann, about the liberal lioness and former Texas Governor Ann Richards, opens at the Tina Packer Playhouse at Shakespeare & Company on October 19th and runs thru the 28th. The play stars Jayne Atkinson in a star turn. The production, and Atkinson’s performance, received rave reviews in its recent Vermont run. Kristen van Ginhoven directs the Holland Taylor script. In these days of formidable and strong women battling the old guard (didn’t we just mention #MeToo?), this play is sure to delight. (And what about those pesky Senate Judiciary Hearings?)

As always, the Big Dog in South County, Barrington Stage, is humming along with no letup in sight. Julie Boyd continued to hit all the right notes with crowd pleasers like West Side Story, bringing in a stellar cast, including my pal (and Housie neighbor) Chris Tucci as Officer Krupke. But I’d also like to compliment BSC in supporting new theatrical works like The Cake and Well Intentioned White People. And in a seamless variety of new and old, the classic Tennessee Williams play, The Glass Menagerie, begins performances October 3rd and runs through October 21st on the Boyd-Quinson MainStage. Julie Boyd directs a great cast: Mark H. Dold as TOM, Caitlin O’Connell as AMANDA, Angela Janas as LAURA, Tyler Lansing Weaks as JIM and Susan French as the VIOLA PLAYER. 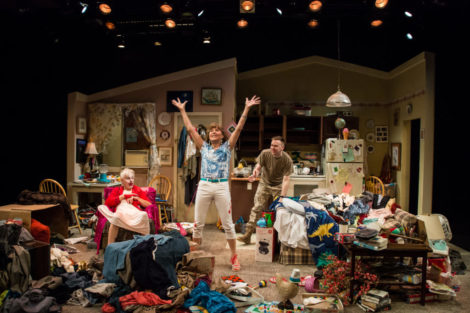 John Hadden as Arnold, Elizabeth Aspenlieder as Paige and Adam Huff as Isaac in the Shakespeare & Company production of ‘HIR.’ Photo: Emma Rothenberg-Ware

There have been many changes in the Berkshires landscape over the past few seasons, most notably the uptick in off-season programming that many of the area theaters are diving into headlong. Most notable among them, and a forerunner of the winter shows, is the 10X10 Festival at Barrington Stage. Co-directed in the past few years by my Berkshire Playwrights Lab colleague Matthew Penn, 10X10 opens in February when the cold winds blow. What’s become crystal clear is that THERE IS LIFE in them thar hills… in Berkshire County, well after Halloween and long before the ice thaws in spring!

Kudos to Ms. Boyd for being one of the first to roll the dice on a fun, new play festival back when the Grinch of Conventional Wisdom was waving a big red financial Warning Sign! Now, ALL the local theaters offer diverse and challenging theatrical programming and not just Bob Cratchit and his gang. Although to be fair, Eric Hill and Kate Maguire have created, at the Colonial Theatre in Pittsfield, one of the best productions of A Christmas Carol you’re likely to ever see. In short, there’s now something for everyone in these cold Berkshire winters, not just skiing and hanging your hats and gloves and layers of flannel over the wood stove and battling the elements before soldiering out to Guido’s for supplies. 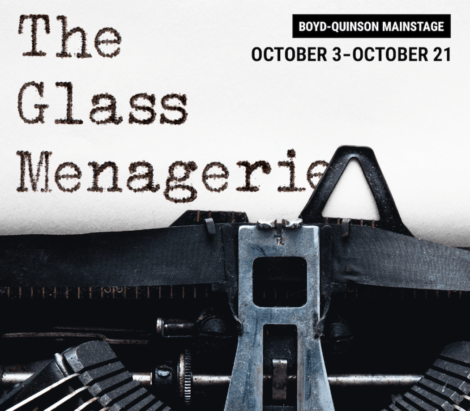 I should also mention a few standout plays up at Williamstown this past summer on the Nikos Stage. The Sound Inside starred the wonderful Mary-Louise Parker in a two-character play by Adam Rapp that touched on familiar but uniquely presented themes of alienation in academia and our protagonist’s (Parker) quest for a surprisingly elusive death. Just beautiful work there by Parker. The killer comedy of the season at WTF was James Anthony Tyler’s new play, Artney Jackson, with my old friend and Broadway Show League shortstop and softball compatriot Ray Anthony Thomas as the title character. Extremely funny and brilliantly written by Tyler and sublimely directed (or should I say driven!) by Laura Savia, the play hit on all cylinders.

Then there’s that other “little engine that could” South County theater that’s high on talent (ahem) and gumption and low on press, the Berkshire Playwrights Lab. (Full disclosure here. I am one of the three BPL Artistic Directors.) I say low on press because much of the new play development work being done there flies under the radar. Critics are discouraged from coming. After all, these are plays in development. The nerve of those BPL folks! 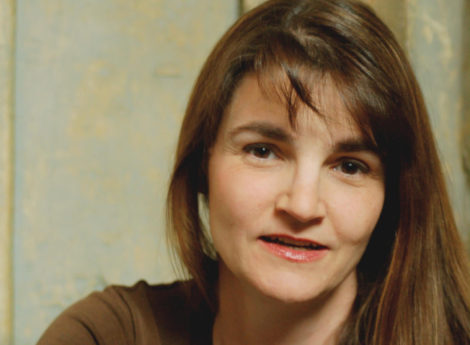 Ann Undeland both wrote ‘Lady Randy’ and will play its lead character Jenny Jerome Churchill in the upcoming Berkshire Playwrights Lab staged reading at The Mount. Photo courtesy of BPL.

But it hasn’t stopped us from creating some fun things coming up just around the corner. September 27th is a reading of local playwright Anne Undeland’s exciting new drama, Lady Randy, about Winston Churchill’s mum, Jennie Jerome. The reading will star Undeland as Jennie and Allyn Burrows as everyone else! Directed by moi. But here’s the fun part, we’re reading it in collaboration with the folks at The Mount at the beautiful Wharton estate in Lenox. And as a curtain raiser preceding Lady Randy, we’ll be reading a short, unfinished Lizzie Borden-esque play penned by Wharton called Kate Spain, directed by Kelly Galvin. That’s Thursday, September 27th at The Mount at 5:00pm.  See The Berkshire Edge Calendar for more info.

And let’s not forget BPL’s 3rd Annual Radius Playwrights Festival this February 1st and 2nd at Saint James Place in downtown Great Barrington. Berkshire Playwrights Lab is looking for new, short (15 minutes maximum), unproduced plays by local playwrights. Anyone who lives or has an address within 50 miles of Great Barrington can submit a play. All interested playwrights should go to the BPL website for instructions on submitting. 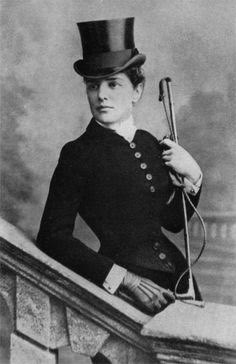 The Radius Festival is presented for three performances. Plays are performed script in hand by an extremely talented group of local actors, directors and playwrights. And to ensure transparency and eliminate even a whiff of favoritism, it’s a blind submission process. All submissions are read by a jury of Berkshire professional theater folks who won’t see any of the playwrights’ names on the scripts. The plays will be judged solely on their merit. How dare they!

You can reach me at jim@berkshireplaywrightslab.org

Jim Frangione, actor, writer and director, is one of the three Artistic Directors of Berkshire Playwrights Lab.