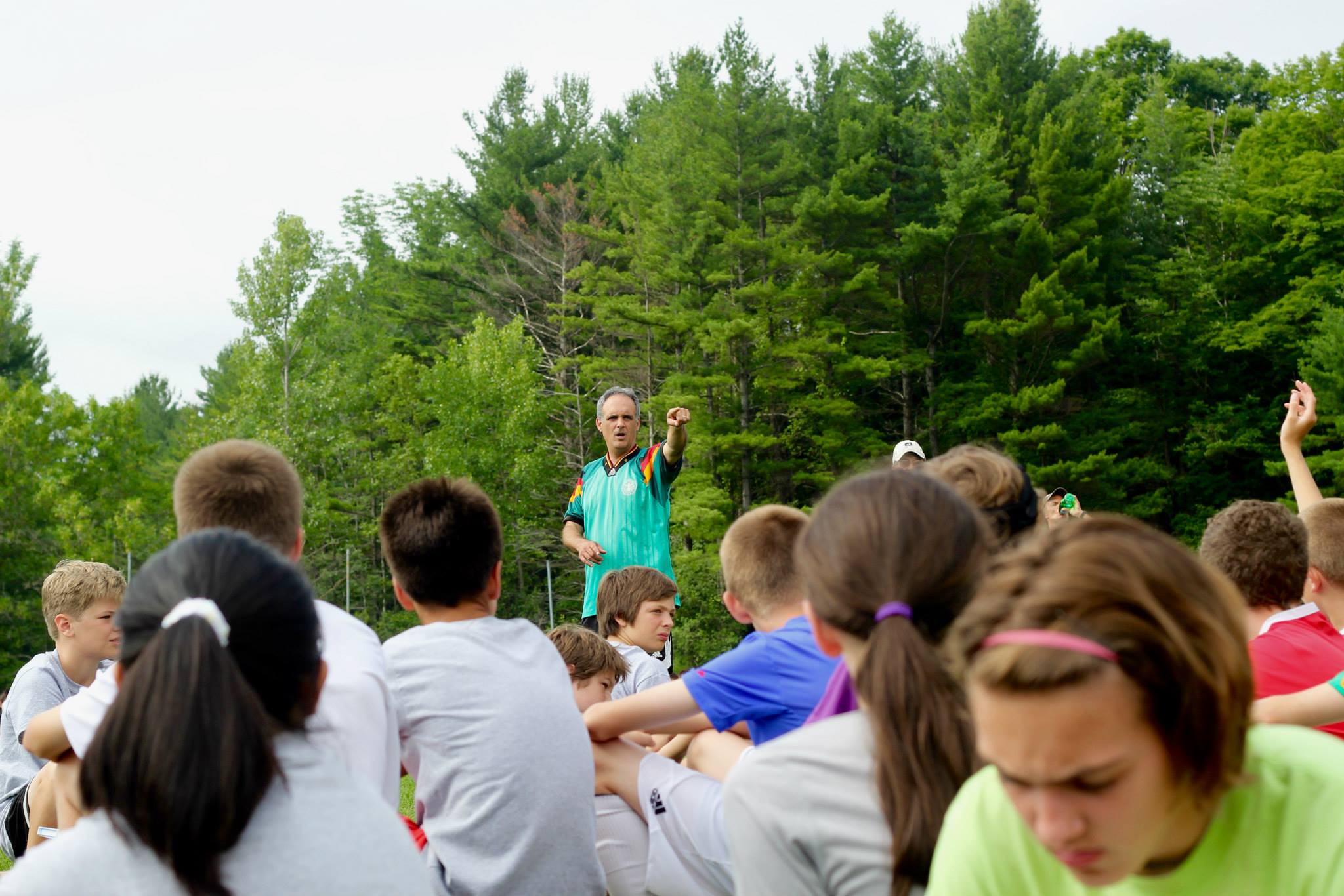 Sheela: When I think of soccer in south Berkshire County, I think Sean Flynn. How’d you get started with it?

Sean: I played soccer for Monument, graduated in 1984. My coaches Tom Kinney and Howard Trombley were pivotal to me in terms of growth as a person. They’re still around, and they were instrumental for a lot of us. We didn’t necessarily have a lot of direction or feel like there was a lot of purpose and meaning to anything we were doing, but playing for Monument soccer really mattered to us.

Sheela: So you weren’t a super academic kid?

Sean: No, no I wasn’t. I just really loved playing sports, and I had a great group of friends, and it was a time where we weren’t really thinking intensely about life beyond our little cocoon of a community. I’d played since I was 5 years old, my dad coached me when I was a little kid, and I grew up playing in Ohio.

Sheela: You grew up in Ohio?

Sean: When I was six until thirteen, and my dad coached all the way through. He immersed himself in the German community in Cincinnati, and he was all about full immersion. We came back here, and came to Monument. I lived for it. If I could find a place to play pick-up soccer during the summers whenever I could in Stockbridge. I played on the men’s teams, went to BCC, played on a really competitive team. Everywhere I went my closest friends, I’ve made lifelong friendships with my teammates.

Sheela: I’ve never been a team sports person. What qualities that are applicable to work life, family life, etc., do you gain from the soccer experience?

Sean: Two things I think of right off the bat are:

One:To feel a level of responsibility to somebody other than yourself. Feeling like what you do, what you say, matters not to just you but a larger group, like a team. That was conveyed really clearly through word and deed by my coaches and parents.

Two:The feeling of having to be uncomfortable. Knowing there are times where in order to get better you gotta push out of what you think you’re good at, and start to stretch yourself in order to the level you want to get to. It’s learning how to be comfortable with being uncomfortable. The physical aspect of that, the mental aspect go, hand in hand. There are times where you’re not sure you’re going to be able to run another sprint, and get up the hill one more time. But you do get up the hill one more time. There’s times when you fail, and fall short.

You gave up a goal, or lost a game, or missed a shot. Whatever it might be, you’ve gotta decide what you’re going to do with it. Is it going to make you or break you? Are you going to fold up your tent, call it a day and not take a risk again? Or will you determine to be better next time? For me, that was the platform where I learned those things. Once I got my life together, and figured out what eventually I wanted to do, it was driven by recalling those experiences and mentoring relationships with my coaches and teachers that led me to a life.

The first thing I did professionally where I started to think there was a path for me was when I was 24-25. At that point I was just around, landscaping, painting, trying to figure it out. I’d gone to BCC and UMass, for better or worse. My dad passed away when I was twenty-two, so that a point where I wasn’t sure where I was going. I took over a position for my friend coaching boy’s soccer at Lenox High School. That was pivotal.

I was there three years, and got great support with Ron Shoecraft and Al Bellinger. Ron was the high-regarded coach at (then) North Adams State (now MCLA). Al Belanger ran a summer soccer camp and they asked me to work camp with them. That was the start of me having some archetypes. These guys are married with kids, have had a substantive life, so that became the pivotal time for me in terms of deciding that I wanted to go into education.

Sheela: So soccer really led you into your career?

Sean: Yeah. I went to Sacred Heart, working in admissions and recruiting, then went to Suffield Academy for two years. That was key, because I was coaching soccer and baseball and I was also a college counselor.

I felt a big pull to do something in a community, to come back here, and make a difference, the way my coaches made a difference for me. The guidance job at Monument opened up, and I jumped in with both feet. Eventually, it got to a place where the work was an extension of what I’d done in the past. I’m a coach. I grew into an educator once I got here, and worked with Marianne (Young. Former MMRHS principal.) I’m much more a guidance counselor /educator than I am a sports coach. I evolved into that.

Sheela: So how did Berkshire Soccer School come about?

Sean: Ron and Al founded it. They brought me in and I became a partner, and I’d come back and work in the summers. Then Mike Powell (another guidance counselor at Monument) jumped on board.

Sheela: Where is it located?

Sean: We’ve been all over the county. Because of our connection to here, the last 10 years our camps have been one week at Lenox High and one week at Monument. Mike stepped down a year or so ago, and Ron and Al last year was their last year, so now myself and Adam Hillebrand, who’s the men coach at MCLA, are running the camp. My wife Kristen is the administrator. Matt Naventi and Brendan Heck (Monument Valley Middle School teachers) will be running camp with me, and we have high school students, a college player or two, who had been campers. It’s our own little family, with its own rhythms and traditions.

Sheela: What sort of numbers do you get?

The Ivory’s, Chris Ivory, grew up here and moved to Miami Beach. Their two kids Cameron and Laurel Ivory, would come up every summer and come to camp. Laurel went on to be one of the best goalkeepers in the world for her age. She’ll be a sophomore at UVA. She plays soccer there, and will be playing in the under 20 women’s World Cup in France.

Now she comes back and comes to our camp; you couldn’t get a bigger celebrity. But there are lots of campers who went on to play in high school, go to play in college, and some will go on to become coaches themselves, and will stay fans of the game and become advocates in terms of the way they live their lives.

For us, it’s about integrity, and on being inclusive. We try to create a neighborhood. Emphasis is always on helping them learn how to compete, how to win, how to lose, learn how to be a good teammate, supportive of others, challenge each other. You can teach a lot of life lessons through what you say but much more what you do.

Sean: Half day is $150, full day is just around $200. That covers five days, nine to three. It’s a pretty good deal. We come up with a discount rate for families with multiple kids.

Sean: Barrington Brewery used to sponsor a men’s team. I stopped when I was thirty-five. I knew I had to make a choice between playing and coaching. I had two little kids; it was time to let go of playing in a competitive team. I can’t let my competitive juices get the better of me, and damage myself for life.

I still play pick-up. That’s such a part of the soccer ethos that’s different from other sports. You can play it anywhere, you can play two on two, four on four, seven on seven. I can’t tell you how many times it’s happened, where I step onto a field with strangers. It’s the best part of the game. You can be on a field with people who do not speak the same language as you, and be completely in synch with each other. It’s special.

To register for Berkshire Soccer School this summer, or for more information, please contact Kristen Flynn at: berkshiresoccerschool@gmail.com