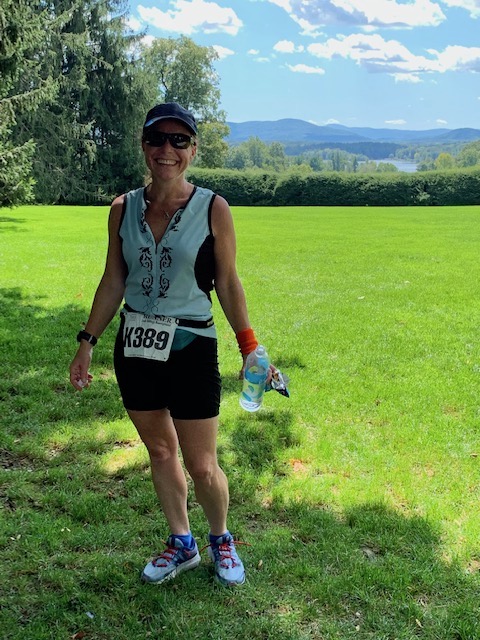 Josh Billings competitor Nicolette Enhorning-Picton, who endured the three phases of the Run-a-Ground despite suffering from neuropathy.

In 1995, I wore an oversized cotton T-shirt. It rained hard that day, and the shirt clung to my skin. It was a cold, long run. I hadn’t organized anyone to greet me at the finish line after my run, so I asked a stranger to take a photo of me soaked from head to toe, then cried all the way home to my parents’ house in Egremont. That was my Josh Billings, and, I suppose, life low point.

After a 17-year hiatus I’d moved home again and recovered sufficiently to team up with a paddler and biker through the race’s Matchmaker. But in 2012 I was a terrible disappointment to 80-year-old Louise. I was lounging in the sun at Camp Mahkeenac when she was rowing furiously into shore a full half an hour earlier than expected. A healthy cohort of people were shouting, “378! Where’s 378!” before I woke up and scrambled over to collect the wristband from Louise, who glared at me from her kayak.

In 2013 Derek Gentile covered the Josh for The Eagle. He commented on my post-race Facebook photo, “Sorry to miss you there, but nice job.”

The photo had been taken with Louise, who’d agreed to team up with me again only after I’d repented and promised to pay better attention and also run faster.

2014 I skipped. I was recovering from a sprained ankle, and my father was dying. I don’t think I even managed to get to the corner of Main and Taconic in Great Barrington to cheer on the cyclists in 2014.

But 2017 was a rallying year, and I organized my very own Williamsville Warriors team. After my biker husband, paddler neighbor and I took our triumphal “We Did It” photo, I had to hustle to get to the Berkshire Humane Society before someone got there before me. I’d gotten a message while running that another family was finding our chosen puppy Paula as charming as we had. We’ve had Paula two years on Wednesday. That was a good day.

Last year race day was cruelly hot, and the run took place on a longer, steeper course due to the Stockbridge Bowl’s algae bloom shutdown. My neighbor David and his twin boys waited patiently to hand me water, longer than they’d expected to wait, at the unshady corner of East Road and Lenox Mountain. Those familiar faces helped carry me up that beastly, mile-long hill, albeit at a walking pace.

This year we had a busy summer and didn’t get a team together. I thought I’d feel guilty and lazy, and filled with FOMO. Not so. Perhaps it’s the ugly times we’re living through, here and everywhere, but even as a non-participant, I feel more gratitude for and more a part of the Josh than ever.

Without a team of my own, I needed a purpose, so I brought my 13-year-old daughter Cecelia to Main Street, Great Barrington, to cheer on her friend Loghan’s mom Nicolette Enhorning-Picton, bib number K389, at the start of the bike portion. This year Nicky wore an orange wristband, designating her as an Ironwoman, meaning she would complete the race’s full course of 27 cycling miles, five paddling miles, and six running miles alone.

Not such a big feat for an athlete like Nicky, who for the past two years had cycled at a competitive pace on the team from Berkshire Pediatric Dentistry, where she works as a dental hygienist. But last December Nicky started having strange sensations in her legs and feet and her doctor thought she might have Multiple Sclerosis. Instead she learned she had neuropathy, a degenerative condition which causes numbness in the extremities. On a good day, Nicky’s legs feel like cotton, and on a bad day the numbness goes all the way up to her mid-thigh.

Seventeen miles into the bike portion of the Josh on Sunday, somewhere on Route 102, Nicky’s legs went completely numb, so much so that she didn’t think her feet would land solidly on the ground at the transition from bike to kayak, and was afraid she’d have to be carried. “That,” she says, “was the low point.”

She did not have to be carried. Nicky broke every personal average she’d ever set as a cyclist. She rode just a hair under 20 miles per hour for most of the race. She gives a lot of credit to her “phenomenal trainer, Bob Benner, who taught me how to stay with a good pack.”

As for me, the record I broke on Sunday was that of my re-established reputation for punctuality. On the drive up to Lenox, I encountered race day detours I hadn’t anticipated, so that, though I jogged up the hill at Tanglewood’s Lion’s Gate parking lot, and sprinted across the lawn, arrived at the finish line five minutes after Nicky had crossed it. “Aw, Mom! You just missed her!” said my daughter Cecelia, who I’d let out of the car before parking, who, these days, I always seem to be disappointing. (In my defense, I still got there at 12:58, and Nicky had estimated she’d be done at one. I should have remembered who I was dealing with and left my house at eleven.)

Nicky’s accomplishment, and the feeling I got waiting for her at the corner of Main and Taconic in Great Barrington, gave me what I realize now is the prize I race for: connection and continuity. As we celebrated her huge accomplishment — 164thout of 373 teams! Without teammates! — on the lawn at Tanglewood, with one of the prettiest views anywhere behind us, Nicky kept thanking me and Cecelia for showing up. “It meant so much to see you both there, to be cheered on twice! I just can’t thank you enough.” It meant so much to be cheering, I wanted to make her understand.

I’m the sort of casual runner whose ambitions on a good day extend to breaking the 60-minute mark on the 6-mile run. (Nicky did that final leg in 58.) But if I don’t understand the drive or ability that ignites Nicky — or the Josh’s perennial winners’ cohort, Kent Lemme, the Minklers, or Allen Heights Veterinary — I understand very well how it feels to be a part of something larger than myself, and also what it feels like to be alienated from everything outside myself. Perhaps it’s the ugly times we’re living through, here and everywhere, that makes me love the Josh, and having 373 reasons to cheer.

It’s 9:30 Sunday morning, and my daughter is outside of Fuel where I left her with an iced chai latte. I stand waiting alone at Main and Taconic, because she says it’s too far to walk there. There’s a familiar, pregnant silence as one police officer waves vehicles south on Route 7 and holds back the northbound traffic. Then the black WSBS vehicle swoops around the corner. Police vehicles with their lights flashing swoop next. An officer puts out his hand and shouts at a truck in the CVS parking lot, “Stay there! Just stay there!”

I know what’s coming next and yet I still gasp aloud as the great WHOOSH of the first school of bikers sweeps toward me, and I can’t help myself from shouting, “Whoa!” Suddenly, Main Street is awash in bicycles. In just the second or third pack, I catch sight of Nicky beaming at me in her sky-blue tank top, and yell, “Go Nicky!” She told me later Loghan had convinced her to go for the challenge with a steel tight argument, “You don’t know if you will be able to do it again.”

I was so glad to give Nicky a boost, but really, I see now, I don’t even need the bikers to know I’m there on Main and Taconic. Life is messy, and short, and nothing stays the same, and I just need them to do their thing at 9:30 on the third Sunday in September. While they do that, something resets in my soul.