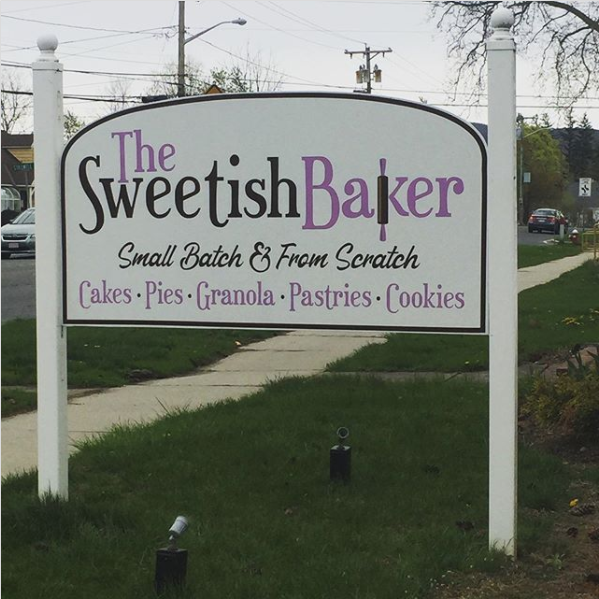 Great Barrington — Hanna Jensen, a k a the Sweetish Baker, regularly sets her alarm for 2:51 a.m.; on really busy days, she gets out of bed at 2 a.m. While this routine might seem grueling to some, for Jensen, getting up early is particularly sweet at present: Her very own commercial kitchen and retail bakery is set to open on Saturday. Thankfully, her commute — to 258 Stockbridge Road, formerly Home Sweet Home Doughnut Shoppe — is really short. As for the inside? Let’s just say normal bakeries don’t smell like this.

“A long as everything works in here, I will never have to go to a rental kitchen again!” Jensen exclaimed early in the week as she cleared up from last Saturday’s “soft opening” and prepared for her grand opening on the 23rd. Jensen’s business began in 2007 out of her home kitchen in Great Barrington, which she operated for four years; she soon outgrew her digs (baking 24 pies in three hours is not a possibility at home) and found the process of finding a retail space and building a commercial kitchen daunting. She went back to school “not for business, not for baking, just to learn,” she told me. Jensen fired the ovens back up in 2015 and began acquiring a steady following at the Great Barrington Farmers’ Market, where her near-famous rhubarb muffins, rugelach and pies (just to name a few) have been staples since 2017. “And that’s not counting when the market first started,” Jensen added, noting that early on, her dad was market manager and her parents sold vegetables out of a truck stand while she and her brother hawked lemonade. She was 4 or 5 years old at the time, and her aforementioned muffins are an iteration of her mother’s rhubarb coffee cake that appeared this time each spring.

In fact, Jensen just got the first rhubarb of the season from Christa Stosiek at Markristo Farm in nearby Hillsdale, New York (whose sister grows the tart, spring delicacy). “She has it the earliest [and is] always my first go-to,” Jensen said, citing Samascott Orchards from Kinderhook, New York, as her second local source (both farms are vendors at the GBFM). This year, while the Sweetish Baker will not have a free-standing booth at the Saturday morning market (COVID-19 restrictions are limiting the number of vendors), her baked goods will be available through MX Morningstar Farm (pre order here). Offerings range from galettes, both sweet and savory, to chocolate chip cookies and biscotti, plus granola, for which Jensen has established a dedicated cult following in Great Barrington and beyond. In fact, her new kitchen has a dedicated granola oven (situated in the “granola side” of the business) to keep up with the demand, which has been swift.

“Orders have been through the roof since the beginning of March,” said Jensen, who bakes off 500-600 pounds of the crunchy stuff each week. Corey Gaylord is at the helm of this operation, the bakery’s “full-time granola guy,” and together the pair churn out five flavors, including the Cruncher, Almond Ginger, the Superseeder, and Cranberry Coconut. The numbers are dizzying: Each week, Jensen tears through six 50-pound bags of oats; 75 pounds of spelt flour; 40 pounds of almonds; and “lots and lots of pounds of seeds,” all of which she purchases in bulk through the Berkshire Food Co-op’s buying club. High-quality ingredients yield consistency, and Jensen is committed to providing her customers with what they have grown to expect; as such, she remains “wary of making changes,” unless, of course, that means trending toward the savory.

Her moniker is a play on some Swedish lineage coupled with the fact that nothing Jensen makes is cloyingly sweet, hence the chevre and pesto galette or roasted vegetable quiche she has been experimenting with. “I love to cook just as much as I love to bake,” Jensen told me, adding “it’s a great way to get your vegetables in when you can view what you’re eating as a treat!” But she always comes back to the sweet. At present, Saturday’s opening is at the top of the list. The Sweetish Baker will be open for business — take-out only — on Saturday from 7:30 a.m. to 2 p.m. and Sunday from 8 a.m. to 2 p.m.; going forward, her regular hours will be Thursday through Saturday 7:30 a.m. to 2p.m. and Sunday 8 a.m. to 2 p.m. “Without my customers, none of this would have happened,” Jensen said, adding “my whole family has put in so much time and effort listening to me plan and gloat and dream.” The custom-designed and installed cabinets, for instance, were crafted by her mother’s husband, Steven Moore of Monterey.

While Jensen will miss her Saturdays at the farmers’ market — she used to barter all her leftover baked goods for a week’s worth of local veggies and meat — she is excited for the next chapter and the flavors of spring. “I love strawberry rhubarb,” Jensen admitted, calling it her favorite sweet flavor combination. “The smell brings me back to my childhood,” she told me, adding that she recently found out it was her grandmother’s very favorite pie as well. This weekend, I encourage you to follow your nose to the Sweetish Baker; you will not be disappointed.