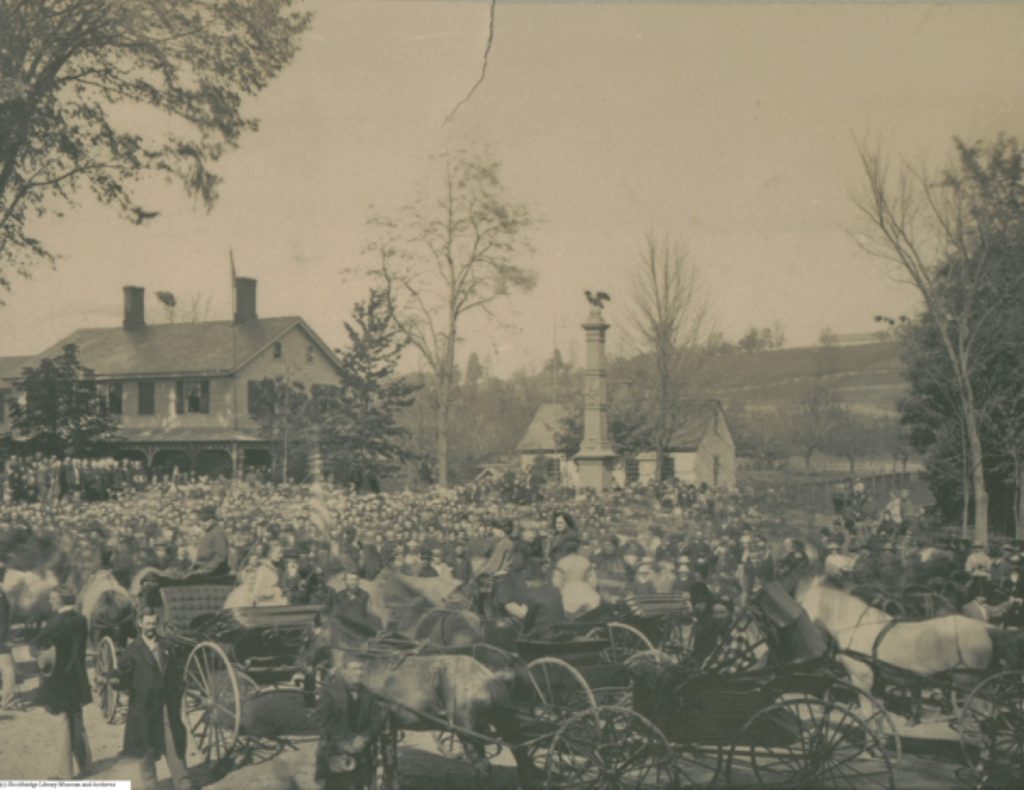 The dedication ceremony for the Civil War monument in Stockbridge. The house on left side of photo belonged to Timothy Edwards from 1772-1792 and Barnabas Bidwell from 1792-1812. Commonly called the Elms, and now with a Mansard roof, at 27 Main St. is an Austen Riggs property. Photo courtesy Stockbridge Library, Museum & Archives

On Oct. 24, 1798, Jonathan Patten, Henry Brown and Jahleel Woodbridge, selectmen for the town of Stockbridge, in consideration of $2, purchased from attorney Barnabas Bidwell, the widow Sarah Gray, and merchant Josiah Dwight land on both the east and west side of what is now Pine Street at the intersection of Main Street, then called Plain Street “for the purpose of a public common or square never to be built upon or occupied in any other way than as an open common.” 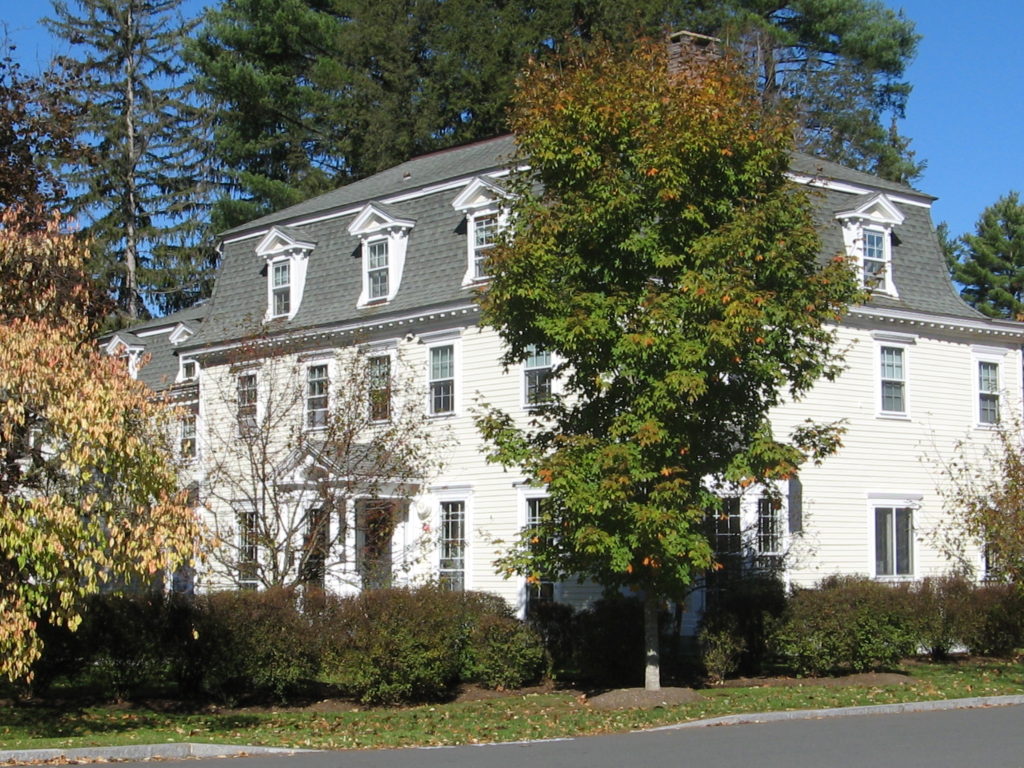 Bidwell owned “The Elms” at 27 Main St. on the northwest corner of Main and Pine streets. Bidwell’s law office would mark the northwest corner of the new park. Bidwell bought the house in 1792 from Timothy Edwards, son of the Rev. Jonathan Edwards. Edwards had swapped 3 acres of interval (meadow) land with Jacob Tusnnuck, who, in turn, purchased it from Hendrick Mmuthawams, who was granted the land by the Indian proprietors in 1750. 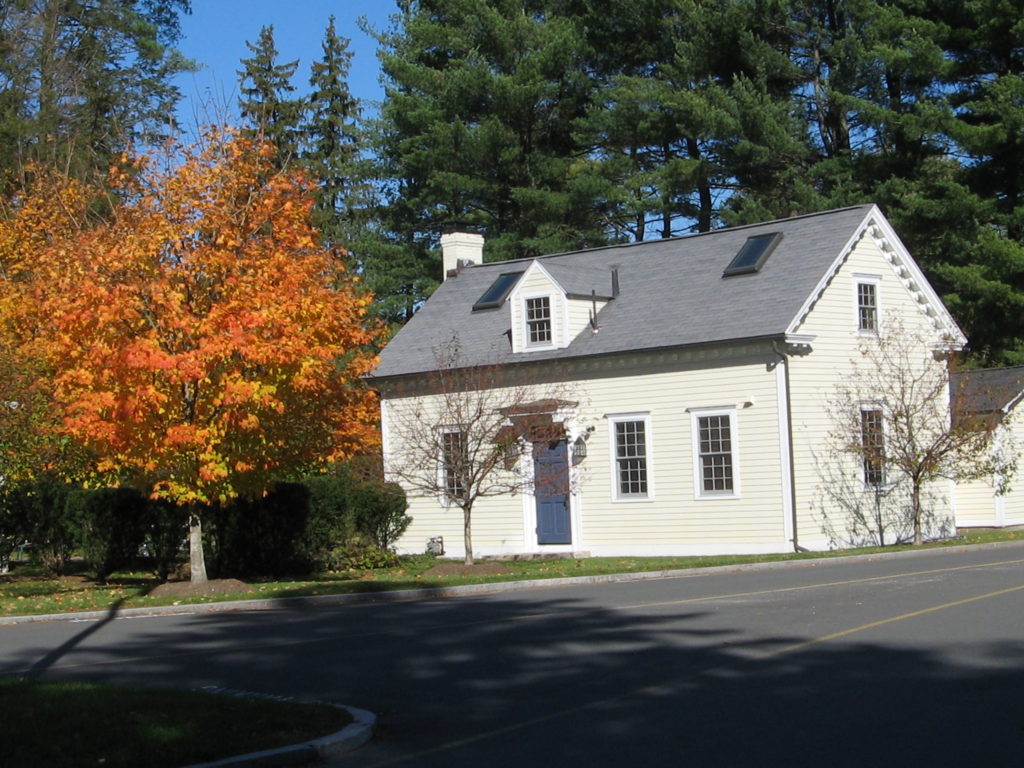 The law office of Barnabas Bidwell, owner of ‘the Elms’ at 27 Main St., Stockbridge, from 1792 to 1812. Later the law offices of Jonathan Edwards Field. Photo: Rick Wilcox

Some 32 years later, on Dec. 1, 1829, Emilia Ann Field, daughter of the Rev. David Dudley and Submit Field, was married to Rev. Josiah Brewer. Mr. and Mrs. Brewer had seven children. This story touches on only one of those children, Marshall Bidwell Brewer, born Jan. 28, 1840, and named after his father’s cousin and childhood housemate Marshall Spring Bidwell.

On the northeast corner, Maj. Josiah Dwight operated a store on a 40-feet-wide strip of land bordering Main Street, now a part of St. Paul’s Church property, that, in 1750, was part of a 3-acre lot belonging to Stockbridge Mohican Ephraim Nunqueen, a k a Naumaunqueen, a k a Bockus. Purchased by the Rev. Jonathan Edwards in 1751, the lot went through several owners before Dwight’s store rested there. The northeast corner of the new park turned west at the southwest corner of Anna Bingham’s house, not to be confused with her tavern that occupied land where the Red Lion Inn is now. Dwight owned a house at what is now 25 Main St., the site of the Austen Riggs Center medical building. Dwight’s Georgian hip-squared house, which he later sold to Dr. Thaddeus Pomeroy and his wife, Liza Sedgwick Pomeroy, sat on a 3-acre lot next door to the Barnabas and Mary. Grace Stanley Parker, a Pomeroy descendant, moved the house around 1896 to what is now 52 Main St.

Mary, writing to Barnabas who was in Boston, Jan. 6, 1806; “Doctor Pomeroy has become the proprietor of the seat [house] erected by your friend the Major [Josiah Dwight]. This week, the writings are to be completed, and possession given in May next. I truly regret Mrs. Dwight’s removal. But! Mrs. Pomeroy will be an acquisition to our circle, and the Doctor for Major Dwight is not, at all events, an exchange for the worse.” Then, on March 6, 1805, she wrote: “Major Dwight has actually sold his store near us to Mr. Brown and that at Great Barrington to Captain Hopkins.”

At a July 16, 1862, Stockbridge town meeting, it was voted that a bounty of $125 be offered to each such volunteer as may enlist under the call of the governor to fill up the quota of the state. It was voted that the above be adopted and to pay each man $125.

“David Owens, Nelson Owens, William A. Johnson, O.R. Foster, James McKenna, Francis Shea, David Funk, John Powers, all non-residents of the town and purchased by the Selectmen to fill the quota,” were among the entries in the pages of the record of soldiers and officers in the military service during the rebellion begun in 1861. “Together with the authentic facts relating to the military or naval career of each soldier, seaman and officer. Approved March 7, 1863. Rebellion Records 1861-1865.” From the pages of the ledger:

James W. Clary, born March 22, 1838, Stockbridge, a farmer, enlisted for three years as a private July 1862. Was taken prisoner May 9, 1864, and died in prison at Andersonville in October of the same year.

Of the 109 entries in the ledger, 10 were killed, another 13 were wounded, three died as prisoners, two were released from prison, seven were discharged due to illness, seven died from illness, two were discharged due to disability, one deserted and apparently the rest came home unscathed. A number of rebellion veterans were omitted from the town records but were later honored on the monument and on a tablet at the Jackson Library, now the east wing of the Stockbridge Library. 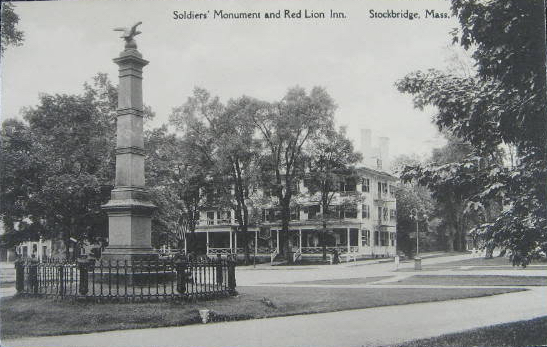 A postcard photo of the Soldiers’ Monument with the Red Lion inn in the background.

In “The Stockbridge Story 1739-1989,” David E. Braman wrote: “At a special town meeting on November 7, 1865, it was voted to appoint a committee of three to plan a monument to the soldiers who had lost their lives in the late war. On April 2, 1866, a sum of $2,000 was appropriated for the erection of this memorial. The committee of the Reverend A.H. Dashiel, Ferdinand Hoffman, and Charles Goodrich supervised the construction. The south side was inscribed, ‘To Her Sons Beloved and Honored Who Died For Their Country in the Great War of the Rebellion – Stockbridge in Grateful Remembrance has raised this Monument AD 1866.’ 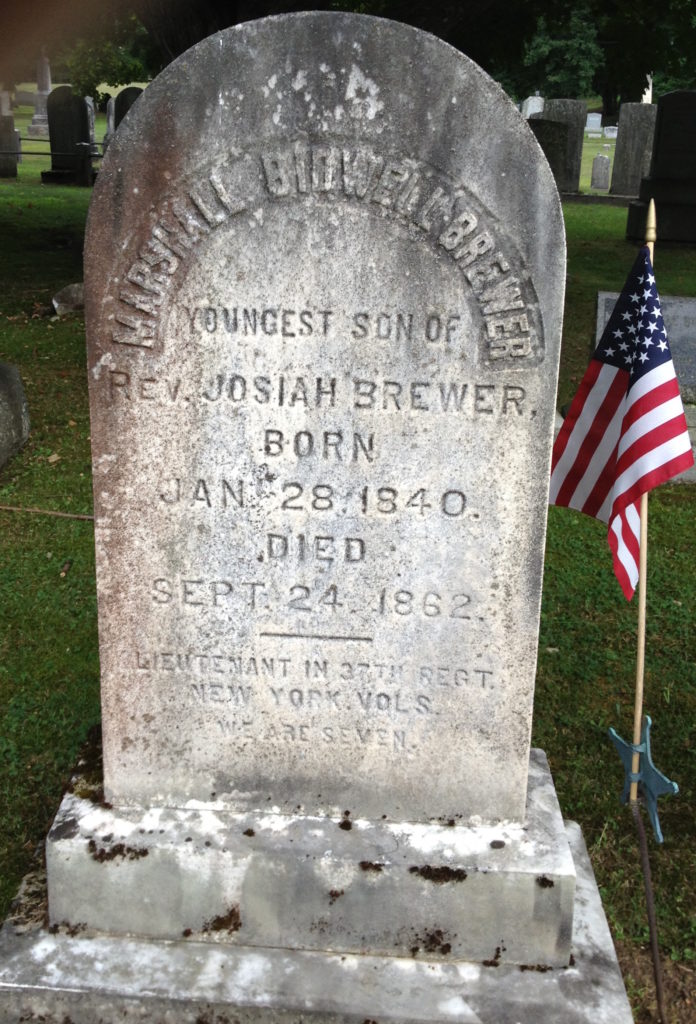 In “Reminiscences Dictated by ‘Papa,’” from the Stockbridge Library Museum & Archives, Ferdinand Hoffmann’s daughter wrote: “The soldier’s monument was built in 1867. Williamstown was the first to build one in Massachusetts, Stockbridge the second. At a town meeting it was voted to have a building committee and Papa, Mr. Dashiell and Charles Goodrich were the three chosen; they selected designs from Batterson, Hartford. The Monument cost $2,500. (Portland Red Sandstone.) Papa persuaded them to put it where it is. At the dedication Gov. Bullock delivered the address, a stage was built. Papa selected the inscription. Papa also secured the tablets in the Library for the fallen soldiers. Miss Maria Sedgwick selected the text for them.”

From the Stockbridge Library Museum and Archives: “In Stockbridge Sep. 24th Lieutenant Marshall Bidwell Brewer, youngest son of Rev. Josiah Brewer. Just as his term of service in the 37ty N.Y.V.M. had expired, and while making arrangements for a Captaincy in the 5th Metropolitan he was seized with typhoid fever, to which he had been exposed while guarding the hospital and came home to die. He was in his 23rdyear. Gleaner, 9 October 1862 issue under “Deaths” (Marshall Bidwell Brewer’s name is on the Civil War monument as well as on the tablet in the Stockbridge Library’s Jackson wing).

Barnabas and Mary Bidwell opened their home to 8-year-old Josiah Brewer and helped to create a park, later the setting for the monument that would honor the tragic loss in the Civil War some 64 years later of Josiah’s son, Marshall Bidwell Brewer, in the Civil War.


— Michael Pollan
Read next: A NOVEL: ‘Over the Edge,’ Chapter 9