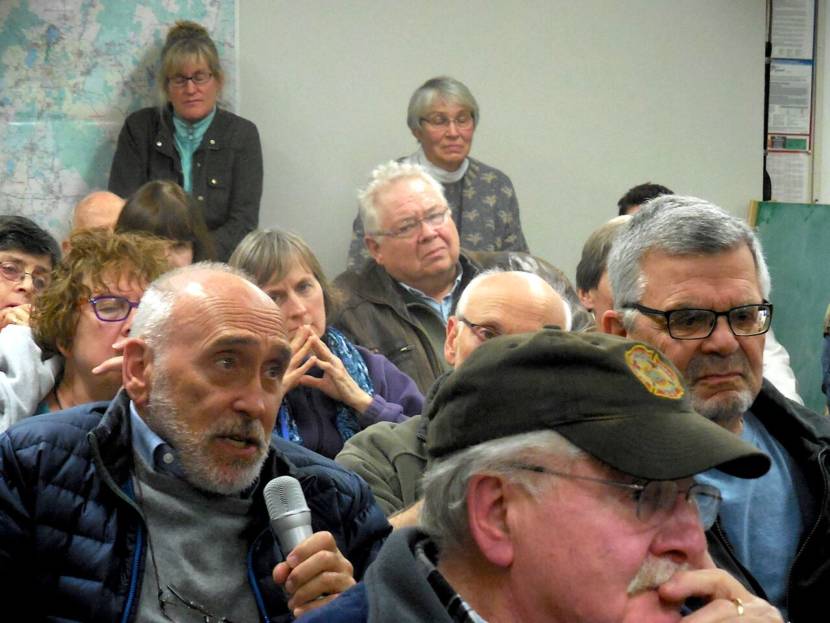 Egremont — It takes courage for a small town to stand up to the state and to a giant corporation, but that’s precisely what happened last night as the board of selectmen voted to opt out of a pact with Charter-Spectrum that would have seen the town fork over about $600,000 more than was agreed upon to install a fiber optic communications network for town residents.

Earlier this month, Peter Larkin, a former state representative from Pittsfield who now heads the Massachusetts Broadband Institute, sent an email to the board announcing a radical change in the agreement with Charter to wire almost all of the town with broadband and cable TV. Click here to view the email, which was posted by Egremont resident Liz Marino on Facebook.

The long and the short of it is that Charter had originally proposed to wire 96 percent of the town (or 883 of 920 households) for a little more than $1.1 million, almost all of which was to be covered by an MBI “last-mile” grant.

In an unusual business strategy, only after signing the contract did Charter perform due diligence. According to Larkin, Charter said it had discovered that approximately 150 utility poles would have to be replaced, dramatically increasing what are known in the business as “make-ready” costs.

The poles, it turns out, are not tall enough to add another utility line — presumably because Fiber Connect of the Berkshires has already strung fiber optic cables just above the telephone lines, where cable TV lines are usually strung. Fiber Connect has already wired large portions of both Egremont and Monterey at its own expense.

So Charter has informed MBI that it will require an additional $1.1 million, creating a funding gap of $1.2 million. Larkin said MBI is willing to split the difference with the town but, if it wanted to go forward with Charter, Egremont would have to come up with more than $600,000.

“This is so outrageous! Ever hear of the Big Dig?” shouted town moderator Steve Cohen, referring to the notoriously bloated and budget-busting public works project in Boston. “Absolutely outrageous.”

Though Cohen’s was one of the loudest voices, he was hardly alone in signaling his anger. The expression of the indignation of others had to be deferred because Larkin spent at least 20 minutes recounting the history of MBI and its granting process for its last-mile program that funds the extension of broadband beyond middle-mile locations such as schools, town halls and libraries.

See video below of the presentation by MBI Chairman Peter Larkin and the subsequent discussion and vote of the selectmen to opt out of the contract:

Several of the 60 or so residents who crowded into Town Hall and the hallway posed questions — sometimes sharply worded — to the embattled Larkin, who had given out charts and maps to the audience showing what the MBI has accomplished in funding broadband projects for 58 Massachusetts communities since its creation in 2008. MBI had $50 million in state funds available for its last-mile grant program.

Larkin emphasized the positive, noting that some towns, such as Mount Washington and Leverett, have decided to build their own networks through the creation of what is, in effect, a municipal utility.

“If you had to build it yourself, the expectation is the town would have had to borrow over $1.8 million,” Larkin said, adding that going forward with Charter would cost about one-third of that. “Here’s a better offer that is less than that.”

Several residents wanted to know why MBI did not provide funding for Fiber Connect. Larkin was quick to throw cold water on that idea, noting that Fiber Connect is a start-up, has “little track record” and that it refused to post a performance bond. Still, those residents all said they liked the service. One said there is “tremendous support” for the company in town.

Larkin explained that cable companies are often favored over smaller fiber companies because of their sustainability. If, for example, MBI gave a multimillion-dollar grant to a start-up that later went bankrupt, there would surely be hell to pay.

“Basically, we were begging for [cable companies] to come into some of these communities because we had no other solutions,” Larkin said in a moment of obvious candor.

“There’s no return on investment for them; that was the bottom line,” Larkin continued, referring to the need for a subsidy. “They want 25 houses per mile with a 50 percent take rate. That was a challenge.”

But the star of the night was Bill Solomon, an attorney who has been working with the selectmen and the town’s technology committee, which recommended going with Charter but largely because of its range of services and the fact that it would not charge the town anything to wire it.

Solomon, who has worked with over 120 communities on cable TV licensing, said he had “never seen a process more poorly handled than by the MBI and the state here. It’s mind-boggling. I’m shocked.”

“No town in the commonwealth would sign an agreement with a cable operator that the cable company afterward could unilaterally withdraw from that agreement or make it such that it couldn’t proceed,” said Solomon, the former town counsel for Stoneham.

Solomon described the agreement MBI had with Charter as “feckless” and “unenforceable.” Contracts, he said, “are based on good faith” and “it’s inconceivable that that this agreement just unilaterally allows Charter to withdraw.”

Larkin countered that the agreement could not be enforced without a cable franchise agreement with the town.

“The monetary contract is only enforceable upon completion of the franchise agreement,” Larkin explained. “Our contract with Charter protected your allocation.”

But Solomon would have none of it. “No corporation enters into a sophisticated agreement with the Commonwealth and doesn’t do due diligence on make-ready … They want more money? At what point could that happen again?”

Solomon, who said the town has been “harmed,” insisted that if Charter wants to back out of the contract, “They need to step up and pay the million dollars … not ask the town for [more] when there’s a contract in place.”

Selectman Mary Brazie told the audience members who wanted the town to “Ditch Charter,” as the lawn signs that have sprouted up over Egremont urge, then they will have to be patient because the town cannot simply give its MBI grant to another company without going through an extensive procurement process and subsequent review by MBI.

And that’s precisely what she proposed. Brazie made a motion for the town to “opt out of the Charter proposal at this time and move forward with a request for proposals and put it back in the hands of the technology committee.”

“Let them draft the proposal, get it out and review it in the best interests of the residents of town of Egremont,” Brazie said to much applause.

Selectman George McGurn recused himself from voting on the matter and, at Brazie’s urging, resigned from the technology committee because Fiber Connect is a client of his wife, Mary, who is a communications and marketing consultant. Bruce Turner, who chairs the board, joined Brazie in voting for the motion.

After the meeting there was open speculation in the hallway that, in seeking an additional $1.2 million, Charter was deliberately trying to find a way to back out of its contract, because the company knew it would have a low take rate since Fiber Connect has already wired much of the town with gigabit internet speeds.

Asked about that possibility, Charter spokesman Andrew Russell would not address it. In an email, he would only say that:

“We are very excited to continue our broadband partnerships with the Commonwealth and other communities, including Hancock, Peru and Tyringham, and we look forward to bringing Spectrum’s ultrafast broadband speeds — including gigabit connections — to thousands of residents and businesses in Western MA.”

For his part, Larkin told The Edge Tuesday morning that, “The MBI is committed to ensuring that the citizens of Egremont can access broadband service, and we will continue to work with the town on a path forward.”

Larkin was in the Berkshires in April. He toured several towns, including Monterey and Egremont, with Lt. Gov. Karyn Polito. In both towns, they faced many of the same questions Larkin fielded last night.

His personal appearance in Egremont on Monday appeared to underscore the gravity of the situation.

Before Larkin spoke, Marino presented to the selectmen a petition signed by 150 Egremont voters calling for a warrant item to be included on an upcoming special town meeting agenda to end negotiations with Charter for a cable franchise agreement.