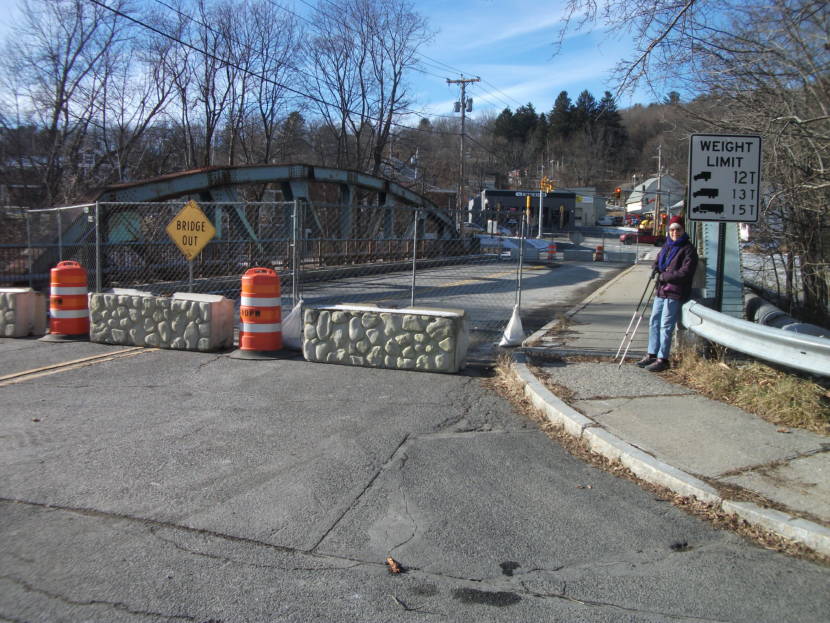 Bernard A. Drew
Great Barrington's Cottage Street crossing is again pedestrians only, a limitation not imposed since the original footbridge was replaced in 1879. Donna M. Drew encountered the vehicle barriers Dec. 19, the first day of closure.

The Rubber Bridge must bounce back

The suddenly closed Cottage Street bridge is now for pedestrians and bicyclists only, just as the first bridge on the site in 1853 was mostly for the convenience of walking mill workers.

The span was known as the Day Bridge a century and a half ago, acknowledging industrialist Horace H. Day. It was later called the Rubber Bridge, because it was on “Rubber Street”—not because it was bouncy—near Day’s rubberworks southerly of where the Brien Center is today.

A Great Barrington native, Day manufactured rubberwear products in New Brunswick, New Jersey, before returning to his native town in 1847. He paid $35 for the water privilege in the bend of the river behind the present St. Peter’s Church. He erected a new dam. There earlier had been a saw and gristmill on the site. Day bought the Kilbourne Lot, eight acres on the east side of the river, south of what became Cottage Street and stretching to East Street. He erected a two-story wooden factory building to produce India rubber cables for ships, according to The Berkshire Courier. He later made shirred goods—rubberized cloth—including boots and raincoats, also fire buckets.

Day needed workers for his rubber mill. There was stiff competition for laborers from the Russell textile mill where E. Caligari’s is now near the Great Bridge. But what about the ready and able Irish Catholics shunned by the Russells? Day plotted a new neighborhood—Great Barrington’s Little Ireland.

In spring 1853 he filed with the registrar of deeds a “Map of Lands belonging to H.H. Day” that included a church plot and 13 accompanying building lots. Day deeded this parcel to the missionary priest, Father Cuddihy, for $1,200. There are an additional 23 building lots on the map that Day would build on or sell separately. 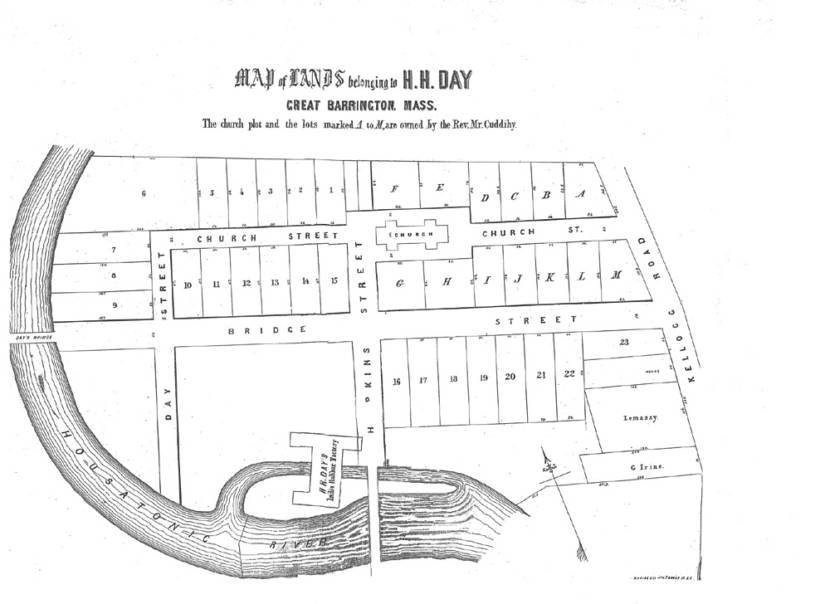 Horace Day’s 1853 subdivision map shows his plan for an entire neighborhood at the west end of what is now Cottage Street, to provide housing for his rubbermill workers. There was a footbridge to Water Street (north Main), with a wagon bridge planned, but never built, crossing behind the present St. Peter’s Church on Main Street. Image courtesy Southern Berkshire Registry of Deeds

That Day came up with such a bold housing plan is remarkable; that he did so in concert with the priest is further amazing, allowing as he did the opportunity for the parish to sell building lots to help fund its church construction. Day must have thoroughly enjoyed this minor defiance of his Congregationalist mill owner rivals, the Russells. It was one shining star on his otherwise dismal résumé.

Day failed to pay royalty for use of Charles Goodrich’s rubber patents and had to close his factory. He was gone from town by the late 1850s. The old mill building went into lesser uses until it was demolished in the 1930s.

Day never saw his streets or house lots come to fruition. Parley Russell, son of industrialist John C. Russell, later acquired this property and property of Woodworth to the north of Cottage Street and marked out Parley, Russell and Everett streets (named for himself and his mill) for housing for his mill workers.

In Day’s day, there was a river crossing at “Day’s Bridge,” as has been mentioned. It reached north Main Street near the present Lennox Jewelers. It was at first a privately built wooden span for foot traffic only. Day workers used it. Day used it; when in town, he stayed at a small house directly west of the footbridge, on north Main Street, where the Emporium Antiques & Arts Center is today.

Day’s subdivision map’s “Bridge Street” was renamed Cottage Street in 1890. Day had an idea of building a full-sized bridge just south, coming out approximately at the north end of the north section of the Housatonic River Walk onto what today is Dresser Avenue.

That one-lane bridge proved too narrow and was moved to Brookside Road in 1887 so a new, wider Berlin bridge with a pedestrian lane could go up on Cottage Street. This one was a mid-deck bridge; traffic traveled through the center of the truss. It was 116 feet long. According to the town report for the year ending 21 March 1887, Flynn & Noonan installed the bridge for $1,440. Berlin charged $3,500 for the ironwork. 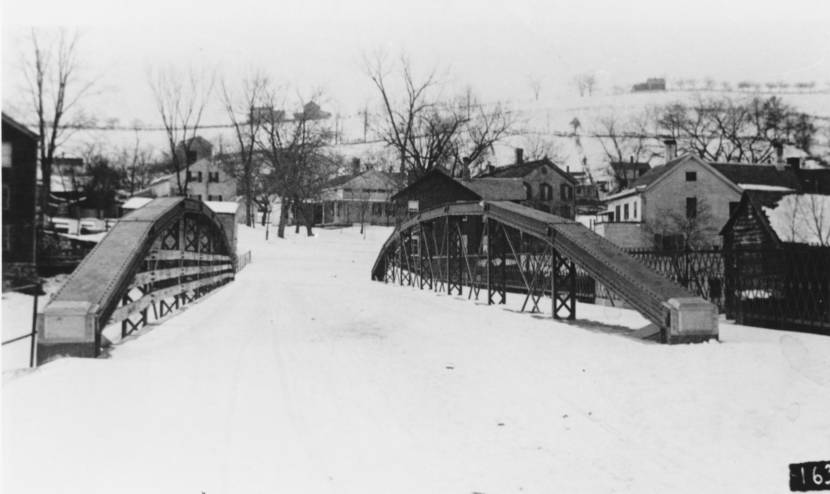 A wider truss span installed in 1887 served until the present bridge was put installed in 1961. Image via author’s collection, courtesy Victor C. Darnell

That Cottage Street bridge was replaced with a modern steel bridge in 1961—a 123-foot Parker pony truss bridge that was also a mover. It had originally been installed over a waterway in North Adams in 1934. The bridge had been disassembled in 1959 and stored in Dalton until rehabilitated in Great Barrington.

Though the Massachusetts Department of Transportation has closely monitored the health of the Cottage Street bridge, its closure came suddenly. There should be an urgency to the bridge’s rehabilitation or replacement, as the Great Bridge (familiarly the Brown Bridge) is the only river crossing downtown adequate for large-truck traffic. Tractor-trailers cannot comfortably navigate the sharp turn from East Street onto Bridge Street to cross at that now refurbished bridge.