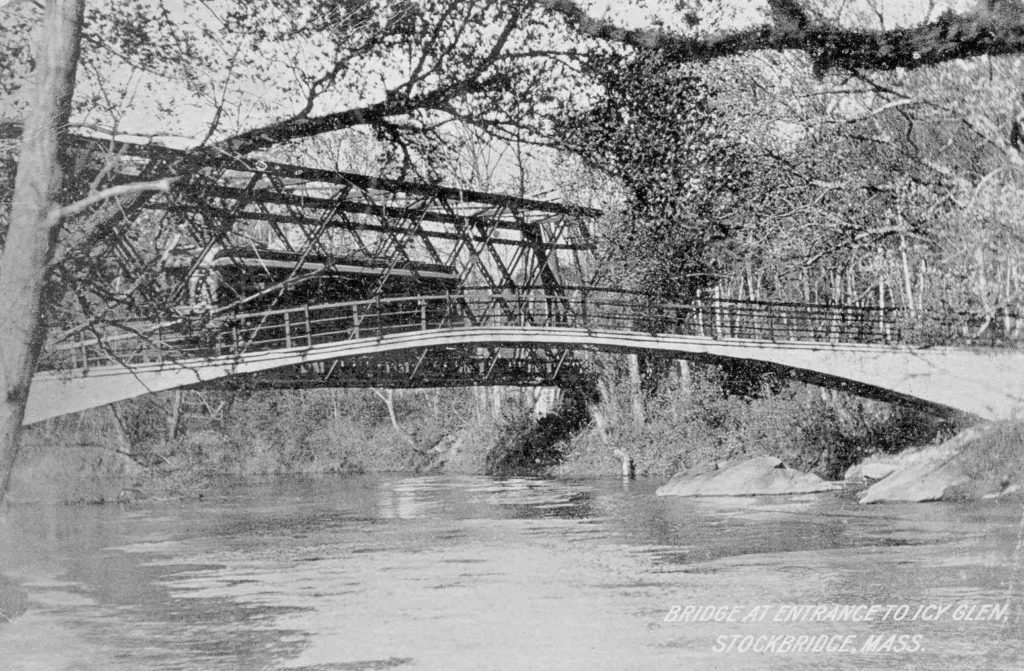 The elegant concrete Park Street bridge designed by von Empgerger is seen with the Berkshire Street Railway bridge (with a trolley crossing) alongside. (Gary Leveille Collection)

The river bridges (20) of Stockbridge

Town names in South Berkshire are sometimes appropriate. Sheffield — with the stress on “field” — is our most agrarian town. Great Barrington — well, it’s just “great.” Stockbridge — with the accent on “bridge” — had more bridges over the Housatonic River than any of its neighbors over the years: a remarkable 20 highway, foot, trolley and railroad spans. That’s as many as many as Great Barrington and Sheffield combined. Ten of Stockbridge’s bridges are still in use.

How many can you name? 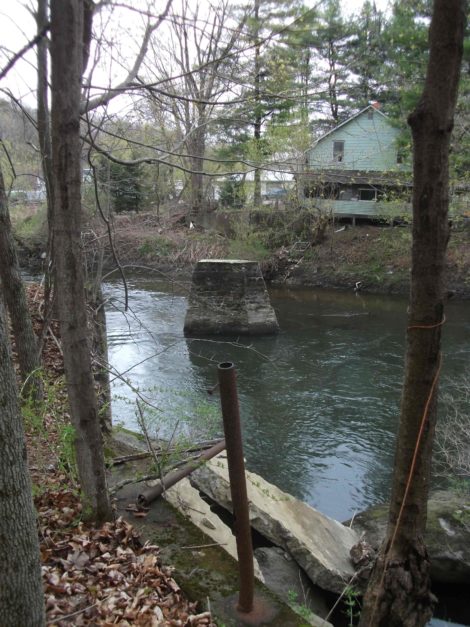 Only a pier remains of D.D. Hopkins’ private bridge over the Housatonic River at Stockbridge Industrial Park. (Bernard Drew photo)

Starting at the east end of town at Stockbridge Industrial Park off Route 102, near the Lee boundary, let’s travel downstream. Dwight D. Hopkins constructed a private bridge here (1) in the early 1900s so he could reach his extensive sawmill and railroad tie factory on the south side of the river. Concrete foundations of the old business remain at the site, visible to those passing on freight trains or who venture beyond the limits of the Laurel Hill Association’s Mary V. Flynn Trail to follow the old Berkshire Street Railway roadbed to the river.

Motorist Albert Cook of South Lee skidded off the Hopkins Bridge in May 1925 and ended up in the river. Though both were injured, he and the bridge recovered.

The Hopkins business failed after his death in 1944 and the bridge went into disuse and was removed. A bridge pier still stands in the river.

Immediately downstream and also crossing from the industrial park was a Berkshire Street Railway bridge (2). The trolley line was active from 1903 to 1930, after which that bridge closed. An abutment survives.

A pedestrian bridge (3) crossed the river from the foot of Lincoln Lane to the south side of the river to connect with a woods trail. There’s still an abutment on the south bank. 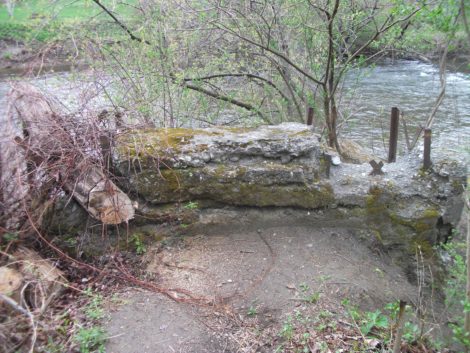 The north abutment is all that remains of a footbridge that once crossed from Lincoln Lane to the south side of the river near Ice Glen. (Bernard Drew photo)

Next is the double crossing at Park Street. There’s long been a footbridge (4) across the river for hikers climbing to Ice Glen or Laura’s Tower. That side of the mountain was for years the property of David Dudley Field Jr. When he hosted Herman Melville, Nathaniel Hawthorne and others at Laurel Cottage (where the tennis courts are near today’s Stockbridge Town Hall) in 1850, several of the group followed a trail behind the house, forded the river and went up to see the sights. Eventually, a footbridge was installed.

The first wooden bridge to Ice Glen wore out and was replaced in 1869. In 1895, German engineer Fritz von Emperger designed a new reinforced concrete arch bridge, one of the first ever built in this country and elegant to the eye. When the bridge was nearly finished, workers placed heavy barrels on the span to see how strong it was. The concrete wasn’t yet dry. The bridge twisted and fell in. Rebuilt, it was used by hikers to Ice Glen until about 1931, when an inspector said it was unsafe. 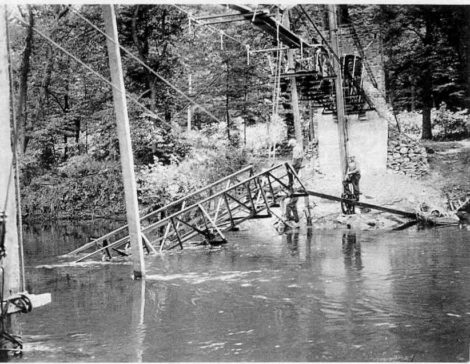 The Park Street footbridge (4) to Ice Glen was a mess after it collapsed during construction in 1936. (Stockbridge Library Local History Room Collection)

A 94-foot metal suspension bridge designed by Joseph Franz was built in 1936. The Laurel Hill Association paid for the work on the new Memorial Bridge. It, too, collapsed during construction, killing one worker. It was built one more time and is still used today.

The second crossing here (5) was a Berkshire Street Railway through-truss bridge built in 1902 so its trolley cars could make a stop at a small passenger station on the north side of the river. That little station still stands in the town park near the Mobil. When trolley service ended in 1930, the bridge was removed, though there are still signs of the track bed in the woods.

The South Street Bridge is on Route 7 (6) near the Stockbridge train station. It’s likely the oldest bridge site in town. The present bridge is of steel and concrete. Mass. Department of Transportation in 2006 completed a sidewalk and landscaping enhancement project at the bridge. The previous bridge on the site in the 1920s appears on a postcard view to be a curved pony truss bridge not dissimilar from Tuckerman’s Bridge.

The Memorial Bridge to Ice Glen, this Route 7 bridge and the next three highway bridges over the Housatonic River were immortalized by Connecticut artist Woldemar Neufeld (1909-2002) in a series of 65 oil paintings he undertook in 1975 as a Bicentennial project to depict all the spans over the river from Hinsdale to Long Island Sound. They were all one time exhibited at Chesterwood.

Gone is the next Berkshire Street Railway bridge (7), a tall, metal through-truss bridge that stood west of the South Street highway bridge. It brought the trolley tracks back across the river to run alongside the New York, New Haven & Hartford Railroad line on its way to Glendale.

The so-called Tuckerman’s Bridge (8) is a town highway bridge at the west end of Main Street. Today’s pony truss span was built in 1928 by Boston Bridge Works. The previous 1873 truss bridge on the site was built by Richard F. Hawkins of Hawkins & Burrall in Springfield. 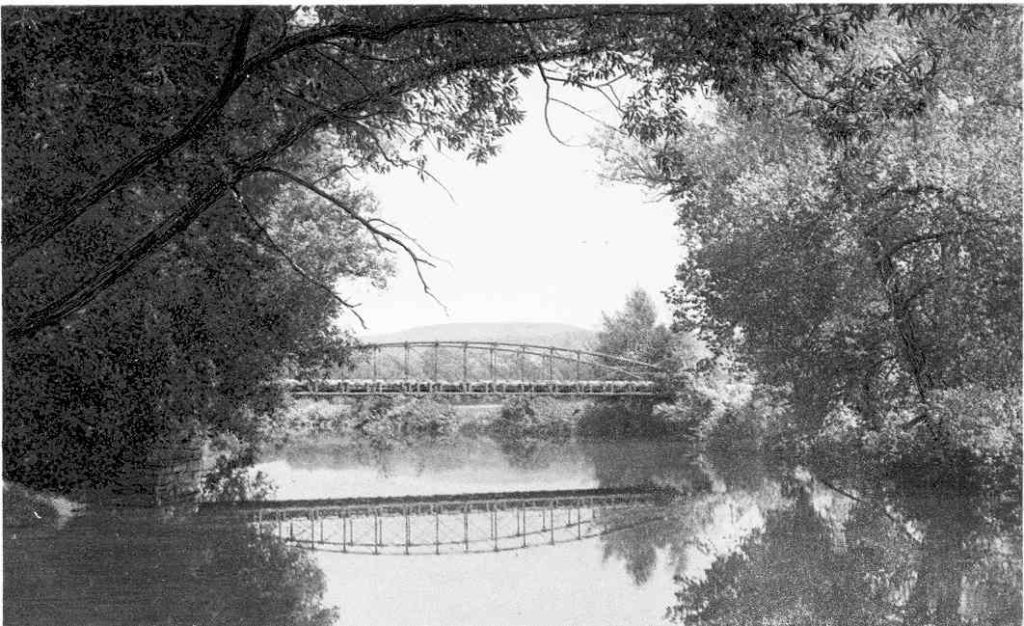 The old metal truss highway bridge at the Stockbridge Golf Course (8) was known as the Tuckerman Bridge. (Drew Collection)

Bridge builders began to take pedestrians into consideration. That 1873 bridge was 23 feet wide, “17 of which will be taken up for the driveway, and six for a walk on the north side,” the Berkshire Courier said Sept. 24, 1873.

Library of Congress has glass plate negatives of a view of this old bridge, as does the New York Public Library. Walter Tuckerman, by the way, was an avid golfer.

Which leads us to mention the Stockbridge Golf Course, which accounts for four footbridges that are still in use, one south of Tuckerman Bridge (9), the other three north (10, 11 & 12) at the oxbow. Golfers see them. Canoeists see them. Motorists and pedestrians don’t. You can pick them all out on GoogleMaps’ satellite view. Years ago, during the cottagers’ “tally-ho” days, summer rowboat parades drifted along the river, around the golf course and beneath the Tuckerman Bridge before debarking at the Southmayd estate for refreshments. 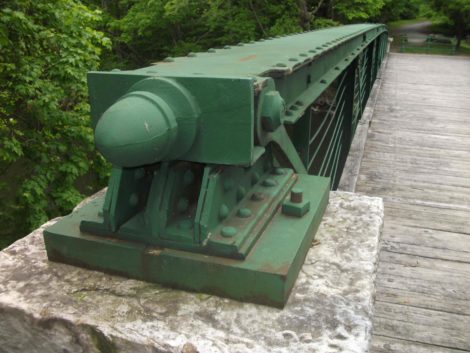 Once a town highway bridge, the Lester or Butler Bridge (13), as it was variously called, on Butler Road is open only to foot traffic today. Just south of the Norman Rockwell Museum, this is Berkshire’s oldest surviving metal bridge. Constructed in 1882, the 88-foot bridge is a pinned wrought iron half-through truss. The design is based on a pattern developed by Ohio engineer August Borneman, who received a patent in 1879 for a “bedstead” truss.

Historic American Engineering Record has documented this bridge, calling it “an apparently unique example of a small highway bridge designed by the re-eminent bridge engineer George Shattuck Morrison, who is remembered primarily for his long-span railroad bridges and his service with the Panama Canal Commission.” J.H. Burghardt of Curtisville built the abutments.

When we reach Glendale, the river crosses at the still-active Glendale Middle Road bridge (14). The previous bridge on this site, a 117-foot Berlin Iron Bridge Co. lenticular-style metal bridge, collapsed in a spectacular auto accident in 1974. The driver of a sports car struck the side of the bridge midway through and it buckled into the water. Berlin (or its predecessor, Corrugated Metal Co.) put up more highway bridges in the Berkshires than any other company in the latter half of the 19th century.

Visible just to the east of this crossing are stone piers of another Berkshire Street Railway bridge (15), which brought the line in and through Glendale village. Actually, for a very brief time, there were side-by-side trolley bridges here. Besides the permanent one mentioned, there was a temporary span (16) built on a wooden trestle when the line was first put through in 1905. A photo of the two spans is shown in O.R. Cummings’ history, Berkshire Street Railway (1972).

There’s a phantom bridge crossing here (17), connecting with Dry Bridge Road (now called Mohawk Lake Road). The crossing existed only on paper. It’s shown in the 1876 Beers Atlas of Berkshire County map of Stockbridge. It would have carried the Lee & Hudson Railroad over the river, had that line been completed in 1875. But the rail line was abandoned. Ledge cuts and fills for the track bed are still to be found near Mohawk Lake and in West Stockbridge. The Berkshire Street Railway used the Lee & Hudson right-of-way over or near this proposed crossing.

Continuing on Route 183 toward Housatonic, just below the hydroelectric station, abutments are visible to a bridge (18) built decades ago to enable service to the upstream dam (which was originally built to power a textile factory).

Continuing toward Housatonic village, a steel girder Housatonic Railroad bridge (19) brings the rail line to the north side of the river.

And just before the Great Barrington line, at Alger Furnace, abutments can be seen at low water for the last bridge in Stockbridge (20). This span provided access to the south side of the river to maintain the furnace’s dam there, and to bring charcoal down the mountain to fire the ironworks.

Did I leave any out?