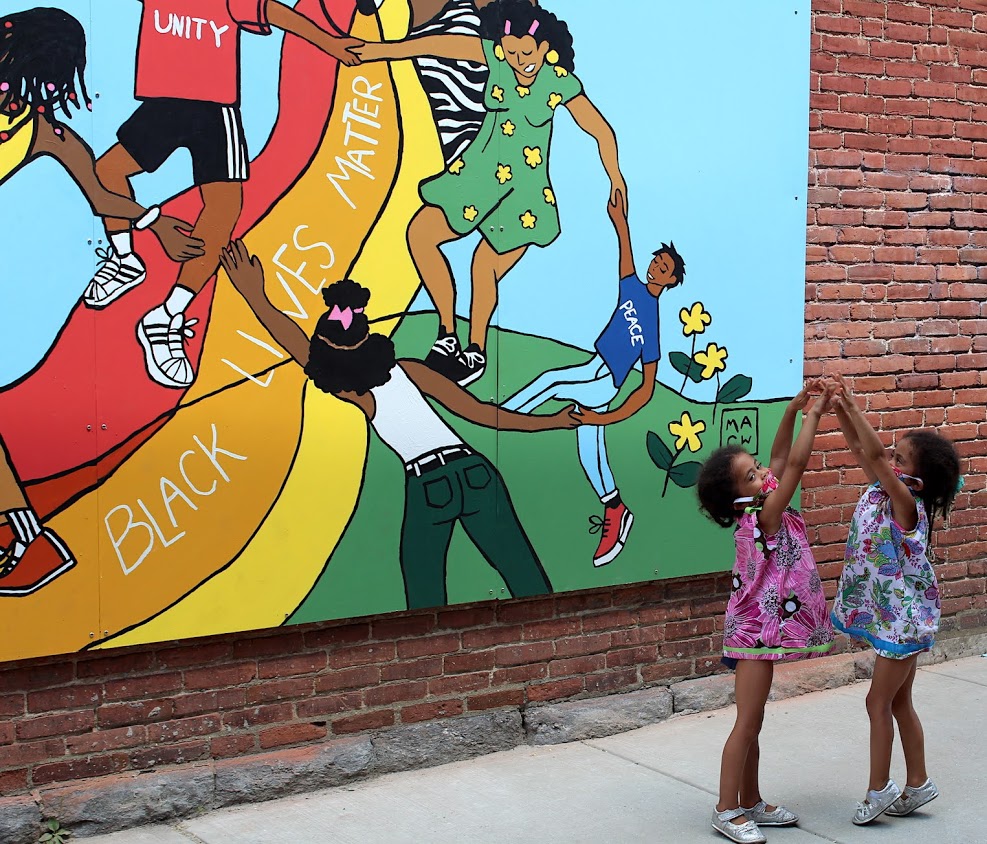 Luna and Evelyn Ithete of Housatonic danced joyfully to the music in front of the BLM mural. Photo: Terry Cowgill

Great Barrington — For a nation in the grip of unrest, it was a message of harmony sprinkled with words of caution against inaction.

There was also music provided by the Railroad Street Dreamers and renowned gospel musician Michael Whitney Brown. But more than anything, it was a Sunday afternoon filled with the perspective of youth leadership and teamwork in the Black Lives Matter movement, as exemplified by a new downtown mural that is the product of the group-mentoring program of the Railroad Street Youth Project.

“I know people in town are relieved that we are not one of the towns being ripped apart by racial tensions,” said Dorree Ndooki, a sophomore at Skidmore College who spearheaded the project. “But that doesn’t mean we do not have those same problems right here. It would be beyond ignorance for us to believe that our liberal bubble is completely supportive of people of color.”

Ndooki cited, among other concerns, lack of affordable housing and health care. As for defunding the police, which has become a goal of some in the BLM movement, Ndooki added, “We couldn’t even reallocate $200,000 of a $1.7 million police budget.”

It was a reference to Great Barrington’s annual town meeting last month when a proposal was made to cut funds from the police department and direct the money saved to other organizations, including several nonprofits. The motion failed.

“These are just three examples of what needs attention before we congratulate ourselves,” Ndooki said. “Find your own form of activism. Believe me when I say it will make a difference.”

See video below of the speakers during the Railroad Street Youth Project’s the “Mural that Matters” Sunday afternoon on the “Rubiner’s wall”:

The peaceful mural, painted in the colors of a rainbow, depicts African American youth holding hands in a show of unity and solidarity as a leader shouts words of exhortation. The leader depicted is Oluwatoyin Salau, a 19-year-old Black Lives Matter activist found dead last month in Tallahassee, Florida, after a protest.

“The mural project is yet another example of what can happen when youth voices are heard and accepted in this community,” added Zufan Bazzano, a 2018 graduate of Monument Mountain Regional High School who currently attends Smith College.

The Black Lives Matter movement started in 2013 not long after the death of Trayvon Martin, the 17-year-old African American who was shot dead by a neighborhood watch member in Sanford, Florida. The movement gained further attention in May after the death of George Floyd, a black man who was brutally killed by a white Minneapolis police officer.

Bazzano was also involved in another RSYP mural. This was around the corner in the alleyway between Railroad Street and the Triplex Cinema. It honors W.E.B. Du Bois, the legendary black scholar and civil rights leader who was born and raised in Great Barrington.

Bazzano noted two troubling events locally. The first occurred about two weeks ago in Sheffield, where a Black Lives Matter sign was defaced by a vandal. A piece of cardboard was placed over the word “matter” and on the cardboard were the words “everyone should own a couple.”

The second incident took place last week where a Black Lives Matter abbreviation was painted on the hillside grass of Monument Mountain Regional High School facing Route 7. Bazzano said a day later someone attempted to cover the letters with a sheet that was subsequently removed.

After the sheet was removed, someone attempted to delete or deface the letters with a lawnmower set at its lowest elevation. Later that day, Bazzano said, someone painted over the BLM letters and changed the L to an E and the M to an N in order to spell out the word “Ben.”

“I do not know who painted the sign and I do not know who attempted to deface it but it was gut-wrenching to have seen and heard about it,” Bazzano said. “The bubble of a small affluent white town does not protect us from racism, ignorance and hate. The fight … should not be happening only in big cities.”

In a further exhortation to activism, Bazzano quoted African American poet and musician Gil Scott-Heron’s epic 1971 warning against complacency, “The Revolution Will Not Be Televised.” Bazzano received hearty applause when she quoted words made famous in the Broadway musical “Hamilton”: “This is not a moment; it’s the movement.”

Others involved in Sunday’s effort included Taylor Sloanaker, who worked on project leadership; and mural artists Mika Antonia-Cookwright, Lanna Knoll and Sarah Wohl. Sloanaker, a 2019 Monument graduate, said she got involved because she wanted to do more to support the BLM movement.

“I felt useless at home watching the protests ramp up in May and June,” Sloanaker said. “This project gave me something to put this passion into.”

Dennis Powell, a Pittsfield native who heads the Berkshire County chapter of the NAACP, extolled the bucolic wonders of the Berkshires but warned that, “Where there is beauty, there is also a level of ugliness.”

Powell made an oblique reference to Robert Moulton, the North Adams city councilor and school committee member who recently called BLM a terrorist organization and branded the COVID-19 pandemic as “miniscule.” Moulton subsequently resigned from the school committee and city council, as well as from his seat on the board of the Northern Berkshire EMS.

“Any time we hear that kind of rhetoric, we’ve got to come out and really dispel that kind of ignorance,” Powell said.

Powell shared a video by his friend Whitney Battle-Baptiste, associate professor of anthropology and director of the W.E.B. Du Bois Center at UMass Amherst. Powell also urged attendees to examine the mural and “try and read the story that’s there and imagine it in your own mind.”

“I love the fact that it’s about the youth because those are the lives that are in danger,” said Powell, who has two sons and sits on the board of the Clinton A.M.E. Zion Church restoration effort in Great Barrington. “Those are the lives that, as a parent, I always had to worry about … Kudos to Great Barrington. You’re really on the cutting edge here in South County.”

See video below of the Railroad Street Dreamers performing “Groovin’,” made famous by the Young Rascals: