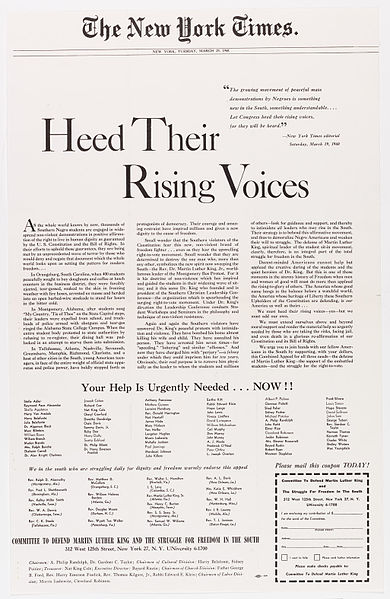 One of the most fascinating cases in Supreme Court history is New York Times Co. v. Sullivan. First, let’s set the stage.

It was March 29, 1960, and the New York Times carried a full-page advertisement: “Heed Their Rising Voices.” The organization that purchased the ad was “The Committee to Defend Martin Luther King and the Struggle for Freedom in the South.” The advertisement was bought to raise money to defend Dr. King and others. They were constantly being harassed and arrested because of their fight for justice in the south. The Montgomery Public Safety commissioner, one L.B. Sullivan, although not named, claimed that he was harmed because he was in charge of the police department. They demanded a retraction, which was part of the Alabama law, and the Times refused. (Eventually the Times did retract.) Sullivan sued and won a whopping judgment of $500,000. The Alabama Supreme Court confirmed the judgment but the matter was brought to the Supreme Court whch, in one of its most famous decisions, found for the Times.

What the court found was that you couldn’t sue a news publication unless “actual malice” could be proved. Amazingly, it was a nine-to-nothing decision. “Actual malice” was the key and the various members of the court laid out how difficult that would be to prove.

The decision made it clear that even if nonfactual material was published, it was essential to the freedom of the press that public officials could not sue news organizations just to shut them up. Eventually the decision was expanded so that persons who purposely injected themselves into public debate were also included as those who could not easily be sued, and the same “actual malice” rules were imposed on them. As someone who has taken very public positions, some of which have made people angry, I know that there are times when I would like to sue someone for their very defamatory statements about me. Because of Sullivan, the chances of my winning are nil. Not only that, it could cost you hundreds of thousands of dollars to defend yourself. Many news organizations and individuals have insurance just to protect them in libel cases, but many of those insurance groups prefer to settle cases by admitting wrongdoing and paying the plaintiff just a small amount, which means that THEY won’t have to spend hundreds of thousands of dollars to defend.

Is there a down side to the landmark Sullivan case? Why should someone who has been defamed be prevented from seeking damages simply because they are a public servant? Obviously, beginning in 1960, the Supreme Court thought that freedom of the press was so important that, while someone might be hurt by the ruling, it was nonetheless worth it. After all, there are those people who think that Sullivan was invitation to libel at will.

On the other hand, we now have a president of the United States who is immensely wealthy and who has the resources to sue those whom he knows don’t have the money to fight back. That’s why it is so important that we have an ACLU, which frequently provides counsel in cases in which the rich use their money to prevail as the bullies that they are. Sometimes, in order to protect those who need it the most, you have to compromise.

Some cases are very difficult. Police have recently been accused of shooting innocent people and the so-called facts in those cases are difficult to prove. The police can be pretty testy when they are being called out. I certainly get that, but police are extraordinarily powerful. Someone has to watch them and, if it isn’t the press, who will do it? That is the role of the press. Thank God for the New York Times and its courage—let all news organizations understand just how important the Sullivan case was.