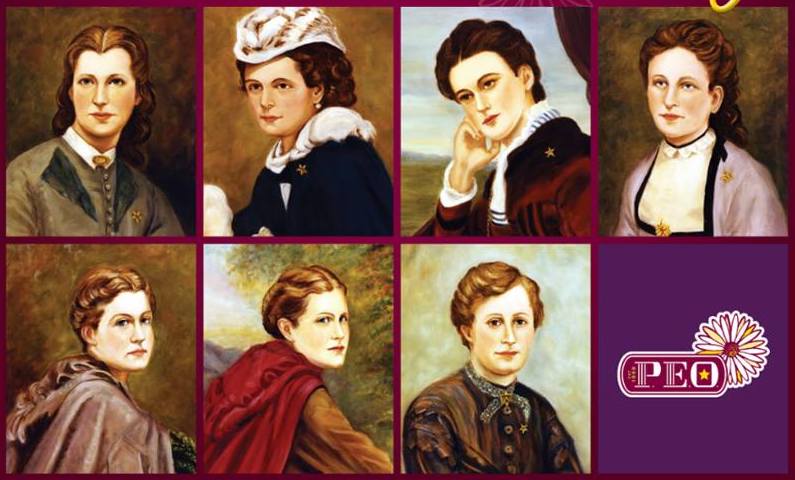 Editor’s note: Emma Kostyun was inspired to learn more about the P.E.O. Sisterhood during March, widely recognized as Women’s History Month, which commemorates and encourages the study, observance and celebration of the vital role of women in American history. Kostyun, a sophomore at Pittsfield High School, was the second-place winner in the 2019 Martin Luther King Jr. Essay Contest sponsored by the Berkshire Eagle and Berkshire Bank; she will read her prize-winning submission, a poem, Saturday, April 6, at 5 p.m. as part of the Martin Luther King tribute concert featuring the Cantilena Chamber Choir and Baltimore’s Urban Choral Arts Society at Trinity Episcopal Church in Lenox.

Pittsfield — “Always stay true to yourself and never let what somebody else says distract you from your goals” is a quotation from Michelle Obama that has inspired me in my life. I have learned there are three main points that all lead to success: empowerment, owning your thoughts and the pursuit of what you yearn to do. Through these three objectives, life unfolds itself and takes the wheel from your hands—even if there are those of us who need a little push or a little guidance, we can still gain it. I know soon in my life—when I graduate from high school and move toward the next step—I’m going to need guidance or a push, and there is one local organization that comes to mind that I know will help me: Just three letters—P.E.O.—epitomize the guidance needed to reach the success individuals deserve. The initials stand for Philanthropic Educational Organization, but don’t be scared by these big words; instead, open your ears to the meaning hidden behind them.

The P.E.O. Sisterhood started with seven friends who all attended Iowa Wesleyan University in Mount Pleasant, Iowa; there was a sorority on campus that had only invited three of the seven friends to join. Not wanting to split up their group, these young women decided to create their own organization called P.E.O. They designed the entirety of the organization in just a short period of time and it was officially founded Jan. 21, 1869. Those seven friends had no clue how grand the organization would become; today, P.E.O. is a U.S.-based international women’s organization that has acquired about 232,000 members in just 150 years. There are two main parts of the organization, the sisterhood and the philanthropies, both of which share the same mission: to foster the education of women, allowing them to pursue their dreams.

The P.E.O. Sisterhood is made up of an international chapter, state chapters and local groups/chapters. The chapters are only located in North America, and open to United States and Canadian citizens or permanent residents who have their green cards. There happen to be four P.E.O. chapters in Berkshire County. My mother became a P.E.O. sister six years ago, and her chapter just celebrated its 59th year; it was established in 1960. Her chapter has about 26 active members ranging in age from 25 to 99. While I am too young to attend meetings, I have been involved in various social functions and fundraisers for P.E.O. I’ve known all the members for a while, and I have shared a great connection as if I wer a sister, too. Each chapter is designed so that if one sister were to go to another chapter, she would feel as welcome in the new chapter as she did in her previous one. Since everyone works together, it creates a loving environment.

“[Through] the different programs that you have and projects that you [complete], that’s where you wind up being so close as the sisterhood part of it” is how Leslie Hazelton and Bertha Lawrence see it, two amazing women who have been local members of P.E.O. for a very long time. I was very grateful to have the opportunity to sit down with these wonderful women before a recent chapter meeting in Pittsfield. The energy in the room was full of excitement and curiosity. It shows that through projects intended to do good in the world, bonds stronger than friendship are created. The way I see it, the “sisters” are all different types of flowers from the same garden.

All the money raised is taken care of by the international chapter, which is located in Des Moines, Iowa. The funds raised are the result of craft fairs, raffle baskets, bake sales and other fundraisers. Most of the goods P.E.O. members sell are homemade by the women who reside in the chapter who do different things and target different groups of women to raise money and provide the scholarships and loans that are given out. As of 2017, more than $304 million had been awarded to over 102,000 women from the organization’s six educational philanthropies. The first and oldest, the Educational Loan Fund, is a loan for women already in college or looking to further their educations. The second, the International Peace Scholarship, allows women from other countries to pursue graduate study in the United States and Canada; they are required to return to their home countries within one year of graduation so that they can make a difference in their own countries. The third, the Program for Continuing Education, is for women whose education has been interrupted; this grant, often awarded to single moms, provides tuition assistance for women with families. The fourth, the Scholar Awards, are merit-based awards for women pursuing doctorate degrees. The fifth, the STAR Scholarship, was established in 2009 for high-school seniors going into their first year of college. The last, Cottey College, was established in 1884. Located in Nevada, Missouri, this independent liberal arts and sciences college for women is owned and operated by P.E.O. itself. It is a debt-free institution from which more than 8,500 women have graduated since its inception.

By visiting the P.E.O. International website, a woman can apply for various scholarship programs, each of which has its own guidelines; once a woman applies, she is assigned a specific chapter whose members help raise the money to get the woman what she is in need of. Certain high school counselors will also contact the required chapter to assist seniors applying to college.

One day soon, I hope to become part of the P.E.O. Sisterhood—in particular, my mother’s chapter. She was invited through her friend Leslie, who introduced my mom to a few fun events before she was asked to join; she was then initiated into the sisterhood. This organization, this sisterhood, gives so much simply because they want to. It’s the very thing the future needs: both to understand and to allow women from all walks of life to gain an education. These women, who devote their time to others, are the angels of our world: They lift all of us up and give us courage for what we yearn to do. With their help, we will not only pursue our dreams but also live the lives we deserve—the future that everyone deserves.