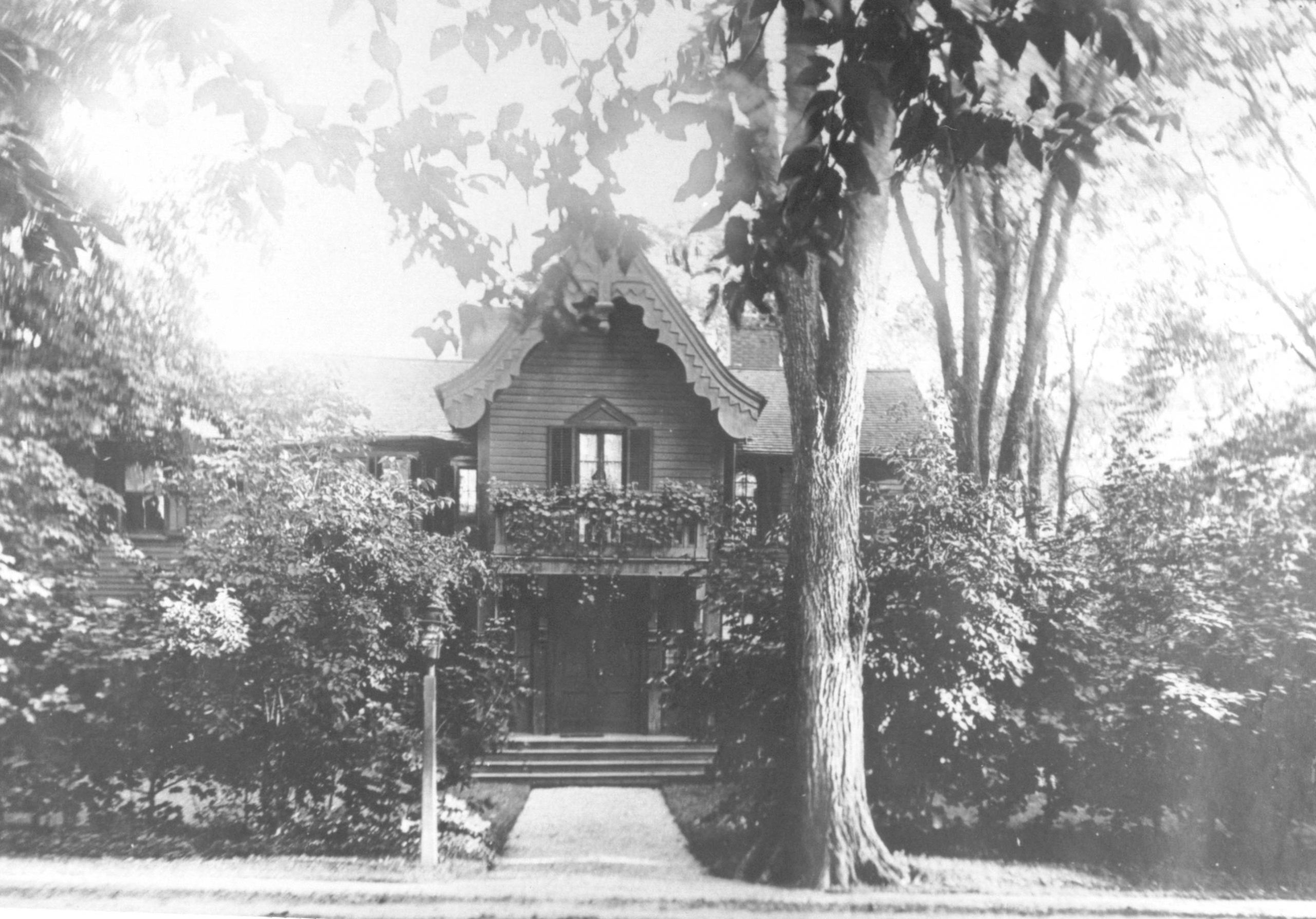 The following story was gleaned from the files of the Stockbridge Library Museum & Archives and the Bidwell family papers. For those who have yet to venture down to the Museum & Archives level at the Stockbridge Library, it’s a journey back in time for either a casual tour of exhibits or to dig deeper into the history of Stockbridge with its cast of characters, famous and near famous, all of whom are patiently waiting for the end of social distancing. I have lifted some of the introduction for this article from a 2017 Berkshire Edge article about Laurel Cottage to give background for a story about Harriet Beecher Stowe.

On Wednesday, Sept. 16, 1953, the Berkshire Evening Eagle published an op-ed article penned by Grace Bidwell Wilcox, titled “The Ghosts of Laurel Cottage.” As curator of the Stockbridge Library Historical Room and a Bidwell family member, it appeared to be a last-ditch effort on my grandmother’s part to herald the historical value of the house and diplomatically bemoan the lack of enthusiasm for its preservation. The house and land, just east of the current town offices, then owned by Grace’s cousin Helen Bidwell Lukeman, widow of sculptor Augustus Lukeman, was being taken by eminent domain for school and town use as a playground and park.

Laurel Cottage, minus the Victorian gothic projections off front and back, provided an excellent example of Queen Anne, late Stuart or Baroque architecture, a style that is best viewed by conjuring up an image of the current Mission House on Main Street, which itself was likely remodeled from a saltbox by Dr. Erastus Sergeant in the 1760s. During the razing of Laurel Cottage, evidence was found indicating the original structure on that site had been built in 1740.

A sampling of the many ghosts of Laurel Cottage should include the builder of the original house, Joseph Woodbridge. Woodbridge, brother of schoolmaster Timothy Woodbridge, was the head of one of the four families invited to settle in Stockbridge to assist the missionary Rev. John Sergeant and Timothy Woodbridge by providing an example of Christian living for the Stockbridge Mohicans. Joseph, with his family, came to Stockbridge in 1739-40. Jahleel Woodbridge purchased the house and property from his father and passed it on to his son Joseph Woodbridge, who willed it to his son Henry. Henry sold it to Rev. Dr. Caleb Hyde. Hyde died in 1838 and Harriet Davidson purchased the property. A widow, she caught the eye of David Dudley Field Jr. and they soon married. Largely through the political and social connections of David Dudley Field Jr., Laurel Cottage became a magnet for many famous people during the second half of the 19th century.

A who’s who of 19th-century American authors who rented or visited Laurel Cottage includes Harriet Beecher Stowe, Herman Melville, Nathanial Hawthorne and the English poet Matthew Arnold. By 1841 David D. Field Jr. had acquired the house, which Field’s daughter Lady Musgrave later inherited. She, in turn, sold the property to her cousin Charles A. Bidwell for $1 and other valuable considerations, which turned out to be the shipping of some of Laurel Cottage’s furniture to England to the home of Lady and Sir Anthony Musgrave.

A group of town residents petitioned for the establishment of Protestant Episcopal Church in Stockbridge and on Feb. 1, 1834, the church was organized at Laurel Cottage, then the house of Rev. Dr. Caleb Hyde. The Rev. Hyde’s neighbor Judge Horatio Byington presided at the meeting. Services for the first nine years were held in the shabby old Academy building on Academy Street [Elm Street] and also in the Town House. [The 1839 town hall]

One of the files in the library museum & archives is labeled “Events of the 1860s,” and news items were extracted from a local newspaper called the Gleaner. The Gleaner noted that, on Aug. 8, 1854, black residents of the town held a fair to support the 54th Massachusetts, a Civil War unit made up of black soldiers. Also in 1865 the Rev. Henry Allen was installed as rector of St. Paul’s Church. And finally, the paper noted that in August 1865 there was a visit by Harriet Beecher Stowe, who, while in town, attended a festival held by local blacks to aid freed slaves.

But I digress, so back to Harriet Beecher Stowe, or better yet, let us start with her daughter. From Margaret French Cresson’s 1950 booklet “St. Paul’s Church A List of the Memorials and People Who Made Them”: “The daughter of Harriet Beecher Stowe, Georgianna May, was a sickly child who survived to become the cleverest, gayest and most tempestuous of the Stowe children. Living in Hartford, she grew up to adore amateur theatricals, and become surrounded by admiring beaux. In the summer of 1864 the young, handsome, elegant, erudite and well-to-do Reverend Henry Allen, rector of the Episcopal Church in Stockbridge, in the Massachusetts Berkshires, near the New York State line, was making the long journey to Hartford at frequent intervals to see Georgie.

Georgie was the fiercest and most individual of the Stowe children. In Boston…. Once at a dinner table she found Mr. Longfellow at her right. In shaking open her napkin, she flipped its enwrapped roll to the floor. Longfellow at once offered her his roll. ‘Oh, Mr. Longfellow!’ She cried, ‘I couldn’t think of accepting the role of a poet.’

Fond of flowers and birds, never too old to slide downhill with the children, Georgianne’s tablet reflects in every distinguished detail the gay and lovable personality of the woman who inspired it.”

A strong woman like her mother, it would appear that Georgie was an apple that did not fall far from the proverbial tree. Apparently the gene pool was strong enough that Harriet Beecher Stowe’s grandson was able to exhibit a certain amount of the devil-may-care attitude as well. More on both Georgie’s mother and her son in Part II.