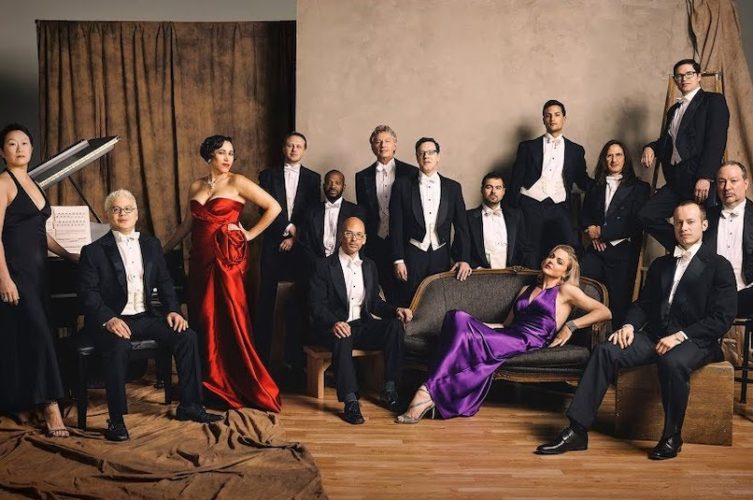 Great Barrington — On the very darkest day of the year, when our spirits have reached their lowest ebb and our minds have descended into desolate places unconducive to vitality, it’s about time for a Pink Martini — the musical type. Because sometimes only whimsy will suffice. But you’ll have to wait until Dec. 31 at 9 p.m. to get it, because that’s when the Mahaiwe Performing Arts Center is again hosting the band’s virtual concert party streamed from Pink Martini’s headquarters in Portland, Ore. They did it Dec. 17 with the band’s “Home for the Holidays” show and, if that performance is any indication of what’s in store on the 31st, we all face the prospect of prolonged and intractable enjoyment on New Year’s Eve when the band presents their year-end show, “Good Riddance 2020.”

Yes, against all odds, there actually is an orchestra both serious and whimsical enough to ring out this wretched year with stylish authority and good humor. But explaining the essence of this band is not easy. You might think of Pink Martini as Sérgio Mendes meets Herb Alpert on estrogen in Romania with Edith Piaf — kind of. Or here’s another clue about who we’re dealing with here: the band’s leader, pianist Thomas M. Lauderdale, has provided piano accompaniment to cabaret performer Meow Meow in her live shows.

To say that Mr. Lauderdale has an affinity for cabaret entertainment would probably be an understatement, and yet cabaret is not the tail that wags the Pink Martini dog. The tail that wags the Pink Martini dog musically is the sixth sense that Mr. Lauderdale and co-founding member China Forbes have always had for writing and unearthing songs that tickle their very, very deepest fancies, along with those of their band, while pleasing the ears of students in Istanbul, striking French workers, young men and women in Australia, and a rather large number of other fans around the world. The band plays songs in 25 languages.

You remember how Arlo Guthrie says that if enough people in the audience sing along with him, it will constitute a movement? It may sound pretentious to call Pink Martini a cultural phenomenon, but what else are you going to call a band that is involved in so many progressive causes in their own community and all over the world?

Lauderdale formed the group for the purpose of playing political fundraisers for progressive causes such as civil rights, the environment, affordable housing, and public broadcasting. His founding purpose is the tail that wags the Pink Martini dog politically and socially. These people care deeply about a great deal more than music, and that’s a big part of what makes the group so appealing to so many people around the world. But on New Year’s Eve, expect the emphasis to be on music, dancing, and general merriment. We’ve all earned it.