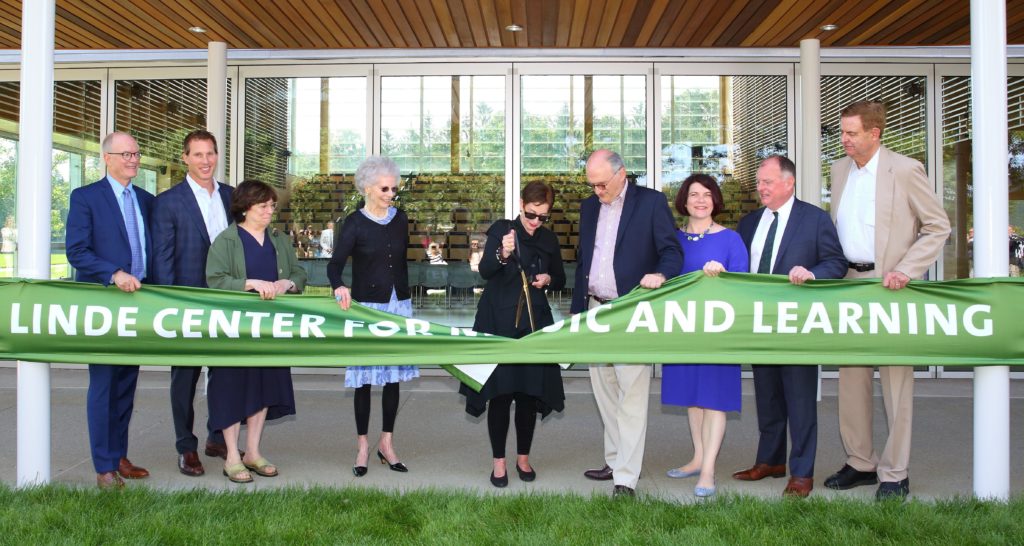 The Linde Center for Music and Learning: Visions and promises to the Berkshire community

On a glorious a summer morning on Friday, June 28, Tanglewood opened the Linde Center for Music and Learning, set back over the rise beyond Ozawa Hall. This is a gorgeous set of three buildings in wood and glass, designed by William Rawn Associates, the same architectural firm that designed Ozawa Hall 25 years earlier. Like Ozawa Hall, its wooden hallways and interior walls of glass evoke the stately tranquility of the Berkshire Hills that surrounds it.

Before about 400 press and supporters on white folding chairs, sheltered by the ancient red oak that faces and graces the new entranceway, Anthony Fogg, artistic director of Tanglewood, introduced each speaker. These included Susan Paine, chair of the board of trustees; Joyce Linde, chair of the initiative committee for this new center and acknowledged by everyone as the guiding principal in this initiative; architect William Rawn III; Edwin Barker, principal bass with the Boston Symphony Orchestra; and Mark Volpe, president and CEO of the Boston Symphony Orchestra.

Although each speaker offered a unique perspective on their place in and vision for this major new center, two themes ran through everyone’s remarks: the pivotal role of the arts and learning in our society, and the importance of and commitment to the Berkshire community, as the BSO stated in the booklet that accompanied the ribbon-cutting event:

“More than a building, it is a symbol for the important role of art in our society. It serves as an incubator for creativity where people can engage with each other and with art, and reinforces Tanglewood as a destination and a landmark for music and learning.

Even more, it is a tangible symbol of the BSO’s dedication not just to being in the Berkshires community, but more importantly, being of the Berkshire Community.”

Bravo to Tanglewood for these values and these promises. Now the question is: How will they be fulfilled?

Based on what we saw in the next 24 hours, there’s reason for optimism that Berkshire County will be well-served. Two reviews will be forthcoming on the celebration concert that evening, and on Saturday morning’s Boston University Tanglewood Institute’s string quartet workshop student recital. Both were impressive: the first a thoughtful homage in music, words and dance to Koussevitsky’s original vision in founding Tanglewood; the second a heart-stopping reminder of the passion and brilliance of the new generation that will take us into the future.

But we also have questions and even a few suggestions about the scope and nature of the promise to be OF the Berkshire community.

The Berkshire community is sprawling and diverse. The birthplace of W.E.B. Du Bois, the first African-American to earn a Ph.D. at Harvard, visitors can follow a two-mile trail at his homesite about two miles from Great Barrington. Farther north, in Pittsfield, are large and active African-American and Latino communities. Some of the poorest communities in Massachusetts are in Berkshire County.

How can Tanglewood extend its promise deeply into this community, engaging its leaders and offering its citizens, and especially its children, the transformative power of music and ideas?

Some of that work is already being started. For example, Boston University Tanglewood Institute has offered full scholarships to three hard-working advanced students from the Kids 4 Harmony program. Based at Berkshire Children and Families, a Pittsfield social service agency serving the Berkshires and Pioneer Valley, Kids 4 Harmony is an El Sistema-inspired program of intensive after-school classical music training, located in economically challenged neighborhoods in Pittsfield and North Adams.

Founded in Venezuela, El Sistema’s purpose is “social justice through music.” Kids 4 Harmony is acknowledged as one of the most successful El Sistema-inspired programs in the United States, and is the only one operating as a core program in a social service agency. Kids 4 Harmony musicians play regularly in Longy-Bard’s Side-by-Side orchestra in Boston, and this year, eight Kids 4 Harmony students have been invited to play in the Youth Orchestra of Los Angeles under the baton of Gustavo Dudamel. One of these students, a violinist, is performing in Edinburgh, Scotland, with the Los Angeles Philharmonic, as described in the LA Phil website:

“Twenty musicians from Dudamel’s signature program YOLA (Youth Orchestra Los Angeles) and YOLA National (students from diverse regions across the U.S.) will be joining the LA Phil in Edinburgh, participating in a cultural exchange with 60 young musicians from Big Noise Raploch, Sistema Scotland, which will culminate in an open rehearsal conducted by Gustavo Dudamel (August 4). This will be the first time that members of YOLA National will have joined the orchestra on tour. YOLA will also be performing side-by-side with the LA Phil as part of the performance on Friday, August 2.”

It is because of Kids 4 Harmony that instrumental and ensemble instruction in classical music is in these children’s lives.

Tanglewood has reached out to Kids 4 Harmony, as well, with free lawn tickets and places in the Darts program. An advanced ensemble will also be performing at Tanglewood this summer Friday, July 12. Bravo to Tanglewood and to BUTI for their support of these young Berkshire musicians!

Yet as one enters the Tanglewood grounds and attends the performances, the question remains about whether a broad and diverse Berkshire population would feel welcome and comfortable here. For most people in Pittsfield, for example, Tanglewood is another world, and as with many other classical music environments, not one where they would feel that they belong, even if they had the transportation to get there and the money to buy tickets.

As distinguished conductor Simon Rattle’s wife put it in the article “Is Classical Music Racist?” in the UK newspaper, the Independent:

“She said: ‘I love the Barbican, it’s one of my favourite places in London, but I was at a reception recently and a woman approached me to ask what my relationship with the Barbican was, basically what I was doing there… There are people for whom [classical music] is still very much about class, and their class only, and they can be very rough, extremely snobbish and yes, racist.”

She also went on to say that black people are made to feel unwelcome in certain venues.

‘I’m used to it, but for other [black] people it’s definitely intimidating… When you’re in some place that’s unexpected, or folks don’t think you’re supposed to be or they’re just surprised to see you, then their eyes are on you.’

Allen believes that the lack of black musicians in our leading orchestras is down to a combination of discrimination and that few black people are exposed to classical music at an early age.

‘You’re not going to get turned onto classical music if you don’t ever hear it, and a lot of black children just don’t get exposed to it very much,’ she told the newspaper.

‘The way to get black children involved in classical music is to bring to where they are instead.’”

To this end, Allen is a supporter of Venezuela’s El Sistema programme, the government funded music education scheme that has used classical music to help children turn away from a life of crime.

‘The process of encouraging new kinds of people into classical music has to start and be consistent,’ she says.

‘Otherwise nothing will change.’

In order to foster that sense of belonging, and not coincidentally, to grow an economically and demographically inclusive next generation of musicians and audiences, we respectfully offer the following suggestions, with apologies for those suggestions that may already be on the Tanglewood agenda:

Such inclusiveness could be enriching for everybody, would create friendships across community, income and racial differences, and would make Tanglewood actually look more welcoming to a broader range of visitors and local citizens.

At the end of the heartfelt and graceful ceremony, the good people who make Tanglewood happen cut the green ribbon, ushering in a new vision for music, learning and community.