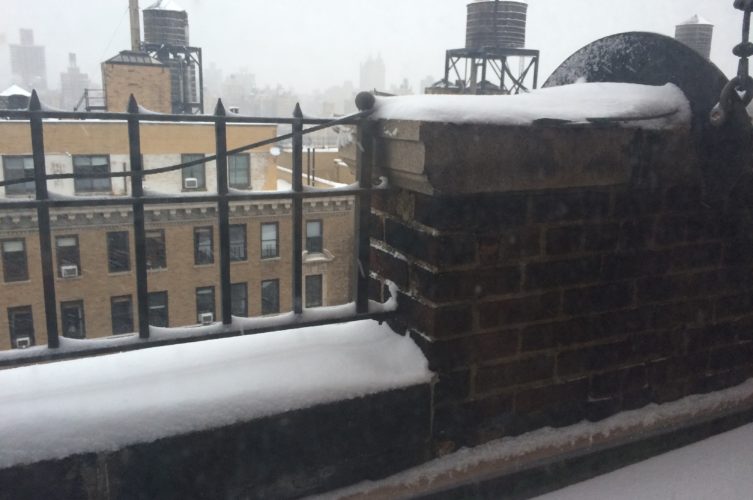 Editor’s Note: The Last Hotel: A Novel in Suites by Sonia Pilcer. This is the 20th installment of her tales of the Upper West Side in the 1970s. Look for it every Friday. To read the 19th installment, with links to previous ones, click here.

Leah let herself out the metal door. The frigid winter air hit her face. She took a deep breath. Ah, she sighed. Breathing was a good thing. Often she forgot for whole days.

As she stepped onto the grey tar, she thought of the roof on 1657 Grand Concourse, where she’d grown up. Summers, she, Maya, Vivian and Debra slathered themselves in baby oil with a couple drops of iodine, for color, then placed towels on tar beach. Lying on their backs, they held their homemade reflectors: manila school folders wrapped in aluminum foil.

Now she stared up at the huge-looking water tower, whose top came to a triangular point with a steel fence around it. Grass seemed to grow in patches on its surface. She bent over the opaque glass pentagon of the skylight, which had metal wire woven through it, and tried to peer through it. She couldn’t see anything.

“Up on the roof…” she chanted in a whisper. It was such a New York City phenomenon. Water towers like urban castles. “I climb way up to the top of the stairs and all my cares just drift right into space…”

The roof was what made living in her father’s hotel bearable. No one else in the building seemed to know. And she wasn’t talking. She was sure if her father found out, he’d have a cow. It’s not like she came up here to jump. Though the thought had occurred to her more than once. “I’ll just kill myself,” was her default mantra. But not seriously. And she wasn’t going to trip and fall off the roof.

As she lit her pipe, she turned toward the lights of Broadway. People were going to Lincoln Center to see dance, classical music, opera. She could see them walking, tiny, brightly colored filaments on the distant street. Inhaling deeply, she imagined the smoke flowing throughout her body, then rising back up, encircling her head.

Leah, the less favored of Jacob’s wives. The less beautiful one, who is full of fruit, and blossoms with offspring while her husband labors in the fields to possess her sister Rachel. She believed it was her story though she had no sister. She had a rival who had taken over, and once again, she was less favored. Luba…

Yes, she knew that Luba’s family had saved her father’s, until they couldn’t. Still, it had been so fast. And Leah missed her mother so intensely, more than she’d ever thought possible. Why was she thinking about this? Sometimes weed did that. Made you go places that you had no inkling were even worth thinking about.

She knew her father had a good heart. Saul had loved her and her impossible mother. But it was something insane, absolutely wrong that he married Luba after only a few months. Okay, he waited the year. Exactly. They were wed at City Hall. He actually wanted her to come to the ceremony. No way, she said. Sorry, Dad.

After that, she got an unlisted number, moved in with Angela. They hadn’t spoken for months and then she needed him. She had nowhere else to go. And he gave her the penthouse dump. But it was somewhere to live.

I’ll go downstairs later. See if he’s around. It was time. She would go look for him soon.

“Maybe I’m not that unhappy,” she said softly. “Maybe I just think I am. I think too much. Maybe I need an education in happiness. How to feel it? How to know when it’s happening.”

That’s when she found herself thinking of her neighbor with the bad skin. Just like that. It came to her head. He had left her more things. A book of New York hikes and bike paths. A not bad looking black lace scarf with silk fringes. An unopened jar of strawberry preserves. Maybe he liked her. She ought to tell him about the roof.

Once she had been into men — until the last asshole fucked her over. And then she met Angela, the devil cunt. She discovered that women could screw with you just like men. So where did that leave her?

“On the roof, it’s peaceful as can be, and there the world can’t bother me…” she crooned softly.

Maybe she would show Fred the door to the roof. That was a gift. The freedom, the space to just be. Probably he didn’t even know about it. You had to go up to the penthouse, then up a flight of stairs. He’d get a kick out of it. Maybe he even got high.

She sat down on a step by the roof door. Did she really want to share this? No. But he was kind to her. Having him as a friend wouldn’t be so bad. But she’d have to talk to him about his personal hygiene. Not that she was prissy. The guy didn’t wash. His skin was horrible, his hair an uncontrolled grey Jewfro that grew out of his ears. And when did he last launder his blue jeans?

The sun had set over the Jersey skyline. From the roof, she could see the mighty Hudson River. Technicolor pinks, oranges, and periwinkle. Even if it was the pollution. What a show. She took another hit.

Sonia Pilcer is the author of six novels including The Holocaust Kid. The Last Hotel is now available at your favorite bookstore or Amazon.com. Visit Sonia Pilcer’s web site here