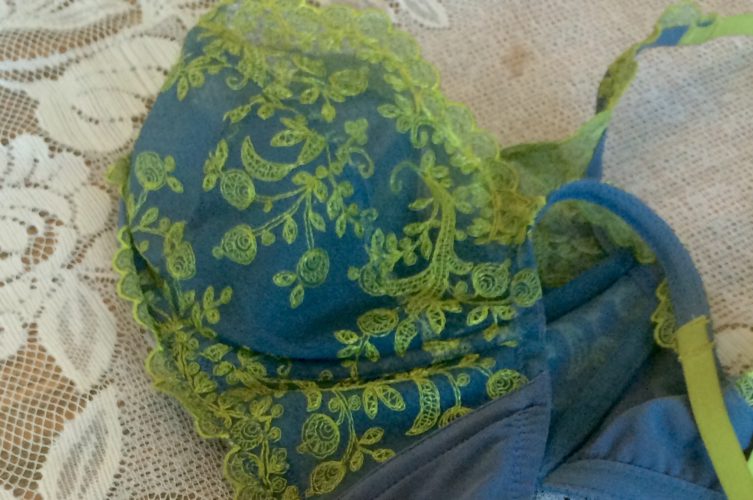 Editor’s Note: The Last Hotel: A Novel in Suites by Sonia Pilcer. This is the 21st installment of her tales of the Upper West Side in the 1970s. Look for it every Friday. To read the 20th installment, with links to previous ones, click here.

As she entered the hotel lobby, Amber nodded to Saul. She was pooped from a long day of lingerie. God, her feet hurt. As she hobbled in her Fiorucci heels to the elevator, Saul approached her.

“You know that place I told you where Duc works?”

“He came in a few minutes ago. He’s not working tonight.”

“You old matchmaker!” she teased.

“The hotel’s going to hell,” he grumbled. “Might as well live while you can.”

Did Saul know? Amber mused once again as she rode up the elevator. She assumed he did, but maybe he didn’t. He was Old World. Men were men, women were women. Many people had no idea. She didn’t tell. Why should she? Certainly no one at work. She had confided in Hana, who lived next door.

“All women are transvestites,” Hana responded. “Wearing war paint on their faces and pantyhose.” She guessed that’s why she refused to wear a bra, even the Vanity Fair nude she gave her.

As Amber walked past Suite 55, she could hear Hana’s typing. The girl pounded on that typewriter like it was a war machine.

Amber unlocked her door. She threw her coat on the brass post bed, then threw herself on the pink satin pillow, flung her heels across the room, wiggled her legs in the air. “Free at last,” she cried aloud. Standing around in heels for seven hours could take the living spirit out of you. “28A to 52 DD,” she sighed.

Crossing the room, she turned on her stereo. Inserted a cassette. The one she treasured most in the world. Now she fast-forwarded it. Pressed PLAY.

The insidious driving guitar began, repeating the same lick over and over and over. It was said he tuned all his guitar strings to the same note.

Lou Reed and the Velvet Underground. Transformer. Amber had listened so many times, the cassette melted. Twice. As a boy, lying between the speakers in Andrew’s room while his parents watched “Dynasty” downstairs. Mesmerized by Lou Reed’s nasty, churlish voice. Waiting for the time when he could leave behind, like a chrysalis, a life that wasn’t his. New York City being the place where you could take a walk on the wild side.

The saxophone solo played over the fadeout of the song was performed by Ronnie Ross, who taught a young David Bowie to play the saxophone.

Oh how he worshipped them all. The only way he could stand his life was the knowledge that he would grow up and leave Andrew behind. There was a there there. And that’s where he was. He was a she in New York City.

Amber hadn’t had a boyfriend in a long time. Her girlfriends thought only of their elaborate costumes, trawling after-hour clubs, lip-synching to Barbra, Aretha, and Chaka Kahn. But Amber was a romantic. And in her own way, shy.

One evening when she was heading uptown, she told the taxi driver, “Please stop for a moment.”

She saw Duc standing in front of Studio 54, almost a half foot taller than everyone around him. Dozens of people clamored at the door. Definite B and T. Bridge and tunnel. Clearly they didn’t make the cut. When the place opened in ’77, Rubell had told the doormen, “Cast a play mixing beautiful nobodies and glamorous celebrities.”

Amber studied his mocha colored skin, the long black braid down his back. A white silk scarf was tied around his neck, and he held a clipboard. He pointed to a white woman wearing an enormous Afro wig and a Rasta guy, unhooked the velvet rope, waving them through the pearly gates.

She could have approached Duc then.

“I’ve seen you on the elevator,” he said, giving her a warm welcome. “Come in, come in…” He unhooked the velvet rope.

“What time are you finished here?”

“Way past your bedtime.”

“What do you know about my bedtime?”

She had continued uptown in her taxi. Now she paced her room. Faye’s story with Pincus had inspired her, but it wasn’t like she could cook a brisket. What could she offer? What would he like? She didn’t know him, except from seeing him in the elevator, but he looked so strong, so masculine. She imagined he could make even a big girl like her feel petite. That beautiful skin. The glossy, straight hair. He looked like a Samoan prince.

Yes! She embraced her pink satin pillow. Of course she loved men. Adored them, especially the masculine ones. Did that mean she was gay? No. She was a red-blooded passionate woman and soon all her parts would match.

Just then, Amber’s eye caught a pile of video cassettes stacked on her bookcase. She studied the titles. Eyes of Laura Mars. Thomas Crown Affair. Bonnie and Clyde. Network. God, she loved Faye Dunaway. People said she looked like her. Some Like It Hot. Yes, that was it! He probably never saw the film. What a total hoot! Some like it hoot, she joked to herself. Sometimes she found herself so witty. She reached for the VCR case, studying the photograph of Marilyn Monroe, Tony Curtis and Jack Lemmon.

What else? Fritos? English muffins with peanut butter and banana? Cream cheese with A1 Steak Sauce? ‘Smores? Her cuisine was still from hunger bachelorhood. She could make Rice Krispies Marshmallow Treats. Macaroni and Cheese. No. Something else. Yes! Eureka!

From the top drawer of her dresser, she took out a plastic baggie. Yes, there was still a little stash of marijuana. She wasn’t really a smoker but liked to keep it for emergencies. Like now.

She went to her fridge. Yes! She always kept a roll of chocolate chip cookie dough in her freezer. Just in case.

Placing the roll on a metal sheet, she began to slice it. Four cookies should do it with a generous sprinkling of weed on the top of each cookie. Turning on her toaster oven, she let it heat up. She worked the marijuana, which was ground into a fine powder, into the dough. Then she placed the sheet inside the oven. The timer was set for five minutes.

She turned on the hot water in the shower. While she waited for it to scald, she stripped. Shampooed her hair, which was hers, not a wig, like some of the other girls. Conditioned her gorgeous tresses. Washed her voluptuous breasts with French perfumed soap – she’d told the plastic surgeon: “Make ‘em big and bouncy.”

Hair wrapped in a mauve towel, she inspected her face in the magnified mirror. Selma, her electrolysis lady, usually did a good job. But you couldn’t be too careful. With a stern, Gestapo gaze, she searched for errant hairs. When she was finished, she applied a Swiss mud mask, which was turquoise, and sat on the closed toilet to blow-dry her hair. She checked out her legs, which she’d just had waxed.

She checked her old friend, Andrew. Like an old sock, it sat in its cup, under her tight bikini panties. Never mind that. Go to sleep, Andy. She slipped on sheer black panty hose.

What if Duc wanted a run of the mill female? One without, well, baggage. Could she go through with it? It was only one floor upstairs. What did she have to lose? No risk, no life. Dr. Tannenbaum had told her he admired her courage. After she rinsed her face, she splashed grapefruit toner, then a Vitamin E moisturizer.

What to wear? She flung open her closet door. What might Duc like? Her Samoan Prince. Amber decided on a low-cut black dress, a little like Marilyn’s. She brushed her hair, put on gold gypsy earrings. A spritz of Joy perfume. Red lipstick. The timer went off.

Whew! The room was scented with baked marijuana and a little chocolate. Amber inhaled deeply. Mmmmm. He’d like that. God, she hoped the smell didn’t escape into the hallway. She wrapped the cookies in silver foil. Grabbed the Some Like It Hot video. Looking both directions in the hallway, she snuck out.

She hummed as she walked to the stairwell. Only one floor up. Take a walk on the wild side.

Sonia Pilcer is the author of six novels including The Holocaust Kid. The Last Hotel is now available at your favorite bookstore or Amazon.com. Visit Sonia Pilcer’s web site here.