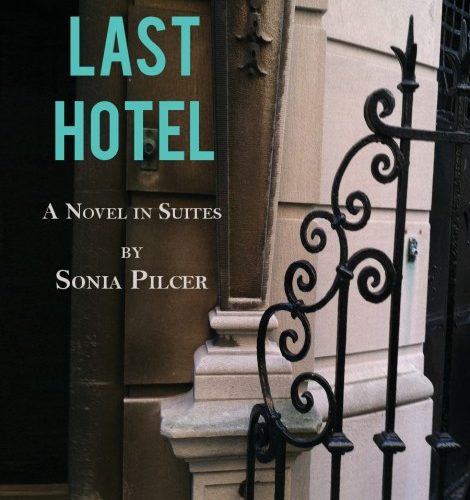 Editor’s Note: The Last Hotel: A Novel in Suites by Sonia Pilcer. This is the 22nd installment of her tales of the Upper West Side in the 1970s. Look for it every Friday. To read the 21st installment, with links to previous ones, click here.

Monica picked up the black phone receiver, then hung up. She wouldn’t do it. She wouldn’t be naughty. She wouldn’t act on impulse. She would control herself. That’s what her group taught her. Instant gratification led to instant destruction. She must let the men she dated — breathe. Not suffocate them with her needs, her hunger, her well of depression.

His phone number haunted her. She tried to forget it. She should wait for him to call her. Eight-seven-three-nineteen-forty-seven. Like a diabolic tune, it repeated in her head. Eight-seven-three-nineteen-forty-seven. She knew he was there. She’d seen him in the elevator. She picked up the phone again and began to dial the number. “No!” she cried out. “I won’t do it!”

The addict’s cry. It was useless. The fix was right there, in her hand. She needed to talk to him. If she heard his voice, everything would be all right. Who could pass that up? She dialed the number, then took a deep breath. Hung up before the ring. Jesus! I’m mad! She dialed again.

It was ringing! The phone was ringing. Each ring gripped her heart with ecstasy and terror. Ring. Ring. Ring. Until his voice came on. “You’ve reached the office of Dr. Tannenbaum. Please leave your name and any message. You can speak as long as you wish. You will not be cut off…” Click.

Oh yeah, Dr. T? He cut her off when she tried to tell him how she felt. He was hateful. She knew it. Despicable. An insect. A toad. He would never accept her anyway. She was the forbidden shikseh who Jewish men lusted after, then dumped for some large-hipped Jewish girl like her upstairs neighbor Hana.

She longed for him beyond reason. His dark curls falling across his forehead as he fucked her. Was it purely physical? Chemical? He was her heart’s desire. It was a sickness of sorts. She knew it. Sex was her substance of choice. Her abuse. Her self-abuse. Never mind that.

For the last few months, she had lived for his phone calls, their weekly rendezvous, usually Friday evening, when he didn’t have a group. Shabbat. It probably turned him on to be with his Goya and eat pork loin with mint jelly, and shack up at the Times Square Inn.

He said they could no longer meet at the Last Hotel. He had to separate his work life. His patients might see him. When they went out, she met him at the hotel’s bar. Monica always wore something brilliant, memorable, fascinating. Last night, it was under her clothes: a black lace camisole with an industrial zipper! (Bought at Lord & Taylor’s from that witch Amber, who could enchant her into spending a bundle.)

It had been hotter between them than ever before. He had been insane with lust. Now she just wanted to say hello. Hi, how are you? How great it was. Was it good for you too? Special? They hadn’t used anything. She wanted to tell him that she could feel his sperm piercing her egg. Yes, she was fertile! How she was still so excited by him that she had masturbated after he left. How she wished he didn’t have to leave, but, of course, he did.

Had it been the ludes last night that made him so wild? Monica liked ludes a lot. Lewd lady! She dialed his phone number again, waiting, fear in her chest, clutching the receiver, ring after ring. She just wanted to hear his voice. Was that too much to ask? This time, she hung up before the message began.

What would Emerald do? Monica had played Emerald Lee on “Forgive Us Our Passions” for many years. Emerald was a cunning nymphomaniac, who did things like sleep with Gabriel St. John, a powerful businessman, stealing him from his wife of many years and his children. Then she had an affair with her teenage stepson, and seduced her mother’s new husband. Now Emerald attended a sexaholics group that met weekly in a church where she had designs on Pastor O’Malley.

Emerald was imperious. She cut through the world like a sharp, shiny blade. Emerald would just go downstairs to Ron’s suite. She would ring the bell until he opened the door.

“We have to talk.” Emerald mouthed the words in the mirror.

“I have to talk to you now.” She would emphasize the last word, then stare into his eyes. The camera focused on her eyes, smoldering suggestively. He could not resist their lure. He would take her into his strong arms, kissing her furiously.

“The cab is downstairs,” she would whisper.

Monica knew she was a drama queen. That’s why she made lots of money, the six figure kind. Yet she lived in the hotel. Friends told her to move to the Eastside. To an elegant building with a doorman. She preferred la vie Boheme.

Monica looked down at her watch. 9:30 pm. Where the hell could he be? She had seen him in the elevator earlier. It had taken all her willpower not to say something. Now she just wanted to hear his voice. Was last night special for you too? Darling, I was ovulating. Did we make a baby? No, she couldn’t say that. It was part of the deal. She felt so alone. Maybe she should get a dog or cat.

Just then, Monica heard something. Could it be? The downstairs doorbell was buzzing. Or did she just imagine it? It buzzed again.

She ran to the bell and pressed the Talk button. “Who’s there?” she called.

The response was garbled, as always. Why couldn’t someone invent an intercom that you could actually hear? She tried again. “Who is it?” The voice downstairs sounded familiar. No. Couldn’t be. The sheer energy of her desire had been heard. He’d come back to her. “Ronald!” she called out his name. He just wanted to give her a warning. He did care about her.

She rang him in, then stood up straight, closed her eyes, took a deep breath. She threw her head forward, letting that mane of hers cascade over her face. Then she threw her head back, running her fingers through her hair. She opened her satin kimono. Her cleavage poured out like a Renoir. She checked in the gold leaf mirror. A perfect pose. She spritzed a little Obsession.

Now she listened keenly for the sound of the elevator. Nothing. Maybe he couldn’t wait. He was walking up the stairs. The doorbell rang.

Slowly, she floated to the door, enjoying every delicious moment of anticipation. She took her time, adjusting her décolletage. “Just a moment,” she nearly sang with joy.

When she opened the door, Monica blinked in disbelief. She pulled her kimono shut. “Who the hell are you?” she demanded.

“Huh?” Monica stood frozen, clutching the robe to her chest.

Monica stirred as from a dizzying merry-go-round. “Oh… Yes… I called before. I’m sorry. I forgot… Just a minute,” she said. “I’ll get my wallet.”

She gave him a five dollar tip.

Monica stood at the green Formica counter in her kitchenette and opened the white container. She didn’t bother finding a bowl, even sitting down.

When she came out of her trance, she discovered an empty container. She had wolfed down every last peanut butter-drenched noodle.

“What a bad girl I’ve been,” she said to her mirror self.

She rushed into the bathroom, shut the door behind her, locking it. She stared into the mirror lit by five Hollywood lights. Her interrogators. Yes, she was fat. She was old. No one would ever love her. How could they?

She knew she shouldn’t, but she must. The gluttonous monster who lived inside of her had just pigged out on a trough of carbs, oil, peanut butter, fat. Five thousand calories, at least. She could lose her role! Become impoverished, homeless. Starve to death. She had no other choice. Her reflection was her only witness.

Bending over the bowl, she did the two finger exercise, plunging her second and third fingers down her throat until she gagged.

Foods of different colors and consistencies poured out of her painted mouth, everything Monica had eaten that day, cascading into the bowl like Niagara Falls at night with colored lights.

Afterwards, Monica sat limply on the edge of the tub. A hot washcloth over her face, where she left it for a few moments. Then she doused her face with cold water.

In the kitchenette, she poured herself a glass of seltzer and lit a clove cigarette. The sweet smoke gently enfolded her. She’d try Ronald again in a few minutes.

Sonia Pilcer is the author of six novels including The Holocaust Kid. The Last Hotel is now available at your favorite bookstore or Amazon.com. Visit Sonia Pilcer’s web site here.