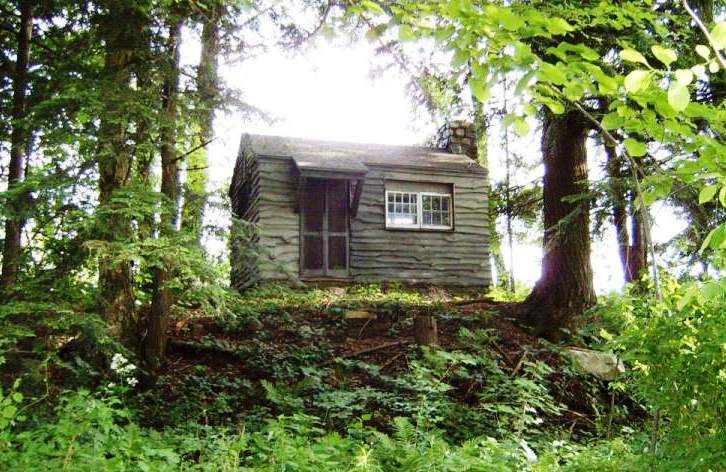 And God stepped out on space,

And he looked around and said:

I’ll make me a world.

Great Barrington — In a cabin on a wooded hill above the Alford Brook, James Weldon Johnson found his muse.

The man who has inspired African-Americans died in 1938, but he is still lifting voices and spirits, and now his legacy is about to grow.

On a Saturday morning about five years ago, Jersey City, New Jersey resident Jill Rosenberg Jones was trying to “slough off stress” from her Manhattan work week by surfing the Internet to look at country houses. She said she needed “to see green.”

Rosenberg-Jones had just been appointed literary executor of the estate of the man who, with his brother, wrote what is known as the “Black National Anthem,” Lift Every Voice and Sing, along with the lyrics to 200 other popular songs, not to mention books and poetry, all while working against discrimination in the early quarter of the 20th century. Born in Jacksonville, Florida, in 1871, Johnson was a man whose talents also found expression in education, law, journalism and diplomacy.

When Rosenberg-Jones was looking for “green” that morning, she said that the late Dr. Sondra Wilson, the former executor of Johnson’s estate, also a W.E.B. Du Bois and Johnson scholar, whispered in her ear: “James Weldon Johnson, Great Barrington.” She typed those words into her browser, and up popped Johnson’s former summer home. Five Acres, with its gem, Johnson’s writing cabin, still intact on the hill above the brook, was for sale. Apple Hill Realty President Will Brinker also felt strongly about the historic value of the property, and was thrilled to sell it to a family dedicated to preserving this part of Johnson’s legacy, Rosenberg-Jones said.

Also a founder and senior member of the Harlem Renaissance, Johnson wrote his most popular and famous works, God’s Trombones, and his autobiography, Along This Way, in that cabin on the hill.

Fast-forward to a shimmering Berkshires evening last weekend for a celebration of his legacy at Five Acres, where a bar was set up under an empress of an oak, where the SoCo Creamery ice cream cart delighted children, including Rosenberg-Jones’ son, Jacob, who ate it on the velvety yard. Soon shoes were kicked off to walk the logs over a muddy section of riverbed to Johnson’s writing cabin. Rosenberg-Jones’ husband, Rufus Jones, opened the cabin door and put out his hand to help his guests up onto the threshold, but not beyond, since the floor is falling in. The cabin had been left alone for years; inside, Johnson’s bed has collapsed. But the Rosenberg-Jones’ plan to rehabilitate the entire structure.

It was then back to the yard, where children planted a tree to mark the occasion, while the adults encircled them singing Lift Every Voice and Sing, which Johnson wrote in Jacksonville, Florida in 1900.

And fifth generation Great Barrington resident, the artist and poet Tom Warner, whose family home is around the corner, and whose grandparents knew the Johnsons, made sure everyone got across the brook. He once crossed it with Dr. Wilson on his back when she had come to visit with Dr. Rudolph Byrd, founding director of the James Weldon Johnson Institute at Emory University. “They were so moved that that’s where Johnson did his writing,” Warner said. “It’s a miracle that this cabin could be saved. Everyone thought the cabin had burned down.”

Now covered in mud, Warner said that as a child he used to play inside the cabin, and was always enchanted by the place. He wasn’t alone. “Louis Armstrong has been here,” he said. And so has filmmaker Ken Burns, he added, when Burns was visiting nearby Bard College at Simon’s Rock.

“I’ve been protective of the cabin my whole life,” Warner said, adding that his grandfather and others told him that slaves who had escaped from New York state had “lived” in it.

“The cabin has been spiritual to me,” Warner added. Warner made a painting of it, and a giclee print went to the Johnson Institute at Emory.

“This day has been a long time coming,” Rosenberg-Jones said at the start of a program to honor Johnson. It began with a blessing from her “Auntie Lenora,” a social worker and Freedom Rider, who in 1961 tested state compliance with new laws to desegregate buses for interstate travel. Dr. A. Lenora Taitt-Magubane, who spent 11 days in an Albany, Georgia jail as a result, said that the lines of Lift Every Voice and Sing express an “exquisite anguish,” reminding us of the “pain of the past” and are a reminder “that we have a legacy to fulfill.”

Rosenberg-Jones noted that the “power behind James Weldon Johnson” was his wife, Grace Nail Johnson, “a fervent historian” who documented and protected her husband’s work with copyrights. Later, Dr. Wilson would “expand access to Johnson’s legacy” by teaching and bringing all of his out-of-print books back into print. Rosenberg-Jones later noted that “Sondra [Wilson] passed down to me the passion, knowledge and deep sense of responsibility that come with stewardship of any legacy.”

And this party, Rosenberg-Jones added, is marking the next step in finding “the way forward” with ideas for ways to “enhance Johnson’s legacy.” She said she was seeking guidance, and asked guests to email her with three suggestions.

The Jones’ played a rare recording of Johnson reading from his work, The Creation, from God’s Trombones, a devotional sermon inspired in part by the intoning of the old-style preachers — more specifically, the style of a Kansas City preacher Johnson once heard, his voice like a “trombone” and his effect electrifying. Johnson notes in his preface that the trombone is the “only wind instrument possessing a complete chromatic scale enharmonically true.” Though Johnson did not write in “dialect,” he said that he “endeavored to indicate” the “tempos of the preacher…by the line arrangement.” Dashes mark pauses made by the breath, in or out.

The “old-time Negro preacher” was, Johnson writes, “at bottom a vital factor…it was through him that the people of diverse languages and customs who were brought here from diverse parts of Africa and thrown into slavery were given their first sense of unity and solidarity.”

It wasn’t just preaching style that inspired Johnson. Rufus Jones observed that the land around the cabin was Johnson’s “muse” for God’s Trombones.

In The Creation, God gathers the sun “in a shining ball…spangling the night with the moon and stars…and God said: That’s good!”

“Then God himself stepped down,” Johnson wrote. “ –– And the sun was on his right hand, And the moon was on his left…”

“There’s the hill,” Jones said, nearly weeping. “The sun rises on the right. You’ll see the moon, the stars, the water.”

“He had to come to this place to get his work done.”

Johnson joined the National Association for the Advancement of Colored People (NAACP) in 1916, and Jones quoted a line from words that were printed on an NAACP pamphlet. “I will not allow one prejudiced person or one million or one hundred million to blight my life. I will not let prejudice or any of its attendant humiliations and injustices bear me down to spiritual defeat. My inner life is mine, and I shall defend and maintain its integrity against all the powers of hell.” 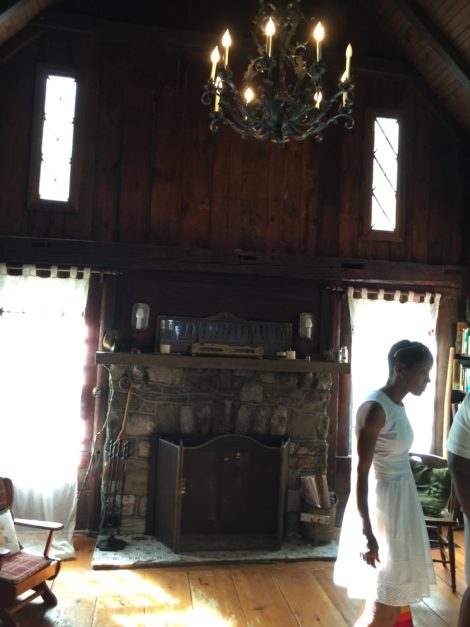 “This is thrilling, moving, because my impression was that it took Great Barrington a while to give W.E.B. Du Bois his due,” said the Jones’s friend Hugh B. Price, a senior fellow at the Brookings Institution, and former president and CEO of the National Urban League. Price, who has a house in Otis, said that Five Acres is “very special for African-Amerian heritage,” and that there is a “growing interest” in such legacies. Price said such a site, “as a physical embodiment of [Johnson’s] creativity” is “rare.”

The Johnsons purchased Five Acres in 1926. The house is the former barn of the original home, the stone foundation of which still exists. Tom Warner said that the orignial house burned, and that his grandfather helped renovate the remaining barn.

The house is now filled with the Rosenberg-Jones’ books. A writing desk that belonged to the Johnsons was on display, having gone full circle after it landed with the Warner family, then was handed down to Tom Warner, who said he composed his first poem at it. It is now back in its home. A gown belonging to Grace Nail Johnson hung nearby, and correspondence and copies of Johnson’s books lay arranged on the desk and table.

On the piano sits a book of Spirituals; Rufus Jones is a gregarious musical talent with a silky voice and a knack for herding those around him into impromptu musical endeavors. Those who enter the Rosenberg-Jones home wind up singing or playing an instrument by the end of the night, and the evening of the Johnson celebration was no exception. After a toast using the Johnson’s very own champagne glasses, friends sat at a long dining table set up near the old house foundation. Some got up to say a word, read from one of Johnson’s works, or simply tell everyone how much the occasion meant to them. Tom Warner read his poem about Johnson (to read the poem click here), and everyone contributed lyrics to a song about the evening, spurred on by Jones on an amped Martin and a young friend on the drums.

Kenneth Austin, who is senior counsel at the Wallace Foundation, and who has for many years been passionate about Johnson and his work, is helping the Jones’ begin cutting the path to broaden the legacy. He told the lively party that learning of the existence of Johnson’s cabin was “like looking for the holy grail, and then you find it.”

After pie and ice cream sundaes, paper lanterns were sent by fire to the heavens, as if to reach into Johnson’s inspiration and bring him closer.