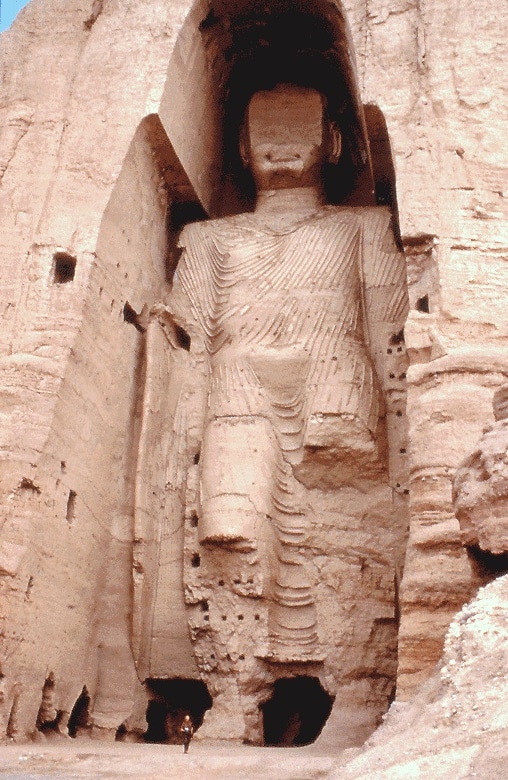 The taller Buddha of Bamyan, Afghanistan, before 2001. Photo: Fars News Agency via Wikipedia

As discussions on the destruction of public art go on, it should be noted that, over the course of history, more art has been destroyed than preserved. Violence against long-held ideas has expressed itself through the physical destruction of items of “sacred” tradition for thousands of years. In a recent article in the New York Times, professor Erin L. Thompson observed,” we tend to destroy rather than protect cultural objects during times of transition.”

The physical destruction we witness now is accompanied by a new voicing of ideas and presents the opportunity to re-contextualize existing public artifacts. When the Taliban destroyed the Bamyan Buddhas in Afghanistan, their religious value was overshadowed in large part here in the west by their historic and cultural value. Today, the Cloisters is a museum, not a house of prayer, and sacred art, almost always forcibly removed from its site of origin out of a desire to protect it from war and destruction or to own it, is found in museums around the world.

It is the recalibration of objects, their re- or desacralization, as it were, that we must now address with respect to those aspects of history, theology and philosophy that they reflect. In deference to the intention of their original presentation, we must reset how we view them, where they should be held and their value to the society as a whole. To focus solely on any ideas brought forward by the object itself, ideas that caused us to both build and now break them, does the art and its creators a disservice.

To understand our own relationship with our statues and public buildings, we should look to the life of Johann Joachim Winckelmann; a name little known outside of scholarly circles of ancient art, but the “godfather”, the foundational voice, of critical interpretation of ancient art in the 18th century. His book, “The History of the Art of Antiquity,” reframed the values and as he called it, the ESSENCE of our perceptions of ancient art and the ideas behind it. As Europe was throwing off its monarchies in violent rebellion and turning to ancient Greek ideas that inspired the founding fathers of France and America from the Renaissance through the Enlightenment, Winckelmann’s close analysis of ancient marble statues in the great private European collections, and the publication of his book in 1764, was a game changer for how we as a civilization would view our physical past and interpret its actions. And what we saw through Winckelmann’s eyes was all pure white marble: “A lie we all hold dear,” as professor Mark Abbe of the University of Georgia observed in a recent New Yorker article.

Today, we now recognize the Greeks used color on most everything. Because of Winckelmann’s preoccupation with smooth white marble, we have suppressed this truth. With an amazing bit of chemical forensics and 3D copies to accurately render in size and color the ancient statuary, Vinzenz Brinkmann and his wife, Ulrike Koch-Brinkmann, German archeologists, were able to “color” several ancient pieces. Temples, gods and entire armies appear to have been riotously colorful — not a dull white marble statue anywhere to be seen. Only after a thousand years of weather was paint washed away and, as Abbe noted, “looking at black and white images in textbooks and old photographs” fixed the idea of smooth white marble we all hold today. Every painting you have ever seen of Greek temples and their gods is basically visually inaccurate.

White’s relationship to philosophical ideas goes back further than Winkelmann’s use of statuary as a jumping-off point. Alchemy and the newer sciences of optics, Newton’s and Goethe’s explorations of color from the two poles of light and dark, and prior explorations of lux and lumen by Robert Grosseteste, Bishop of Lincoln in the 13th century, and his scholastic world tied light and color to philosophy and theology in new and different ways. These explorations of light and optics being promoted and accepted into the 18th century gave Winckelmann the philosophical foundation upon which to build his aesthetic structure of the ancient world, a viewpoint both archeologists and historians vigorously challenge with evidence-based information discovered about our visual past and how to approach it now.

Is there a cautionary tale here? Winckelmann was so adamant about his point of view regarding his perception of the ancients that he literally missed the boat he was supposed to take to go to Greece to see for the first time what he had spent his life writing about. He never did see the reality of the ancient world. In fairness to his scholarship, many of his aesthetic observations are of great value in opening the ancient world to young scholars. For two centuries, he has been relied upon as the “go-to” authority and is probably the No. 1 footnote in college papers, but his observations were grounded in the rarified air of an 18th-century outlook based on out-of-context pieces of marble in private collections.

For those who have walked the streets of Athens, Rome or Palmyra — sadly destroyed by zealots — the impact of ancient ruins can raise other, more earthy and colorful questions these days. When we see the painted statues of Greece as they would have been, and think of them in situ, one is humbled by their vibrancy. It is now most important to recall all of the objects of our past, those we have lost and those saved, and how they frame our culture in its entirety. Placed in the context of our own time, our art, all of it, can help us revision our public future as we come to deepen our relationship with it. I trust that we do not need to melt down all our bronzes to accomplish this.