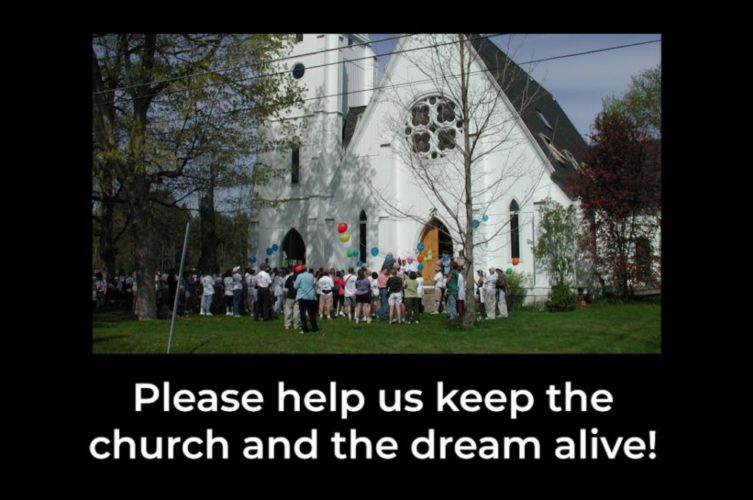 The Guthrie Center needs your help. You know the Guthrie Center, don’t you? It’s that charming former church at the corner of Division Street and Van Deusenville Road in Great Barrington. You’ve probably passed it a million times and maybe also wondered what goes on there. It’s one of those storied Berkshire landmarks that everyone points out to visitors.

Here’s a little history: Originally built as the St. James Chapel in 1829, the structure was enlarged in 1866 and renamed Trinity Church. Alice Brock (of Alice’s Restaurant fame) and her husband Ray purchased the property in 1964 and made it their home. And it was from this very building, one Thanksgiving weekend, that Arlo Guthrie set off on his legendary musical adventure after Stockbridge Police Officer “Obie” arrested him for  “littering,” disposing of trash in the wrong place. Who can forget that famous line…”You can get anything you want at Alice’s Restaurant, excepting Alice”?

Well, you may not be able to get Alice, but for almost 30 years now the community has gotten an amazing array of services from that building. Arlo bought it in 1991 and established The Guthrie Center there, to meet the ongoing needs of the community and to support cultural preservation and educational achievement.

Of course, there’s been music. The Troubadour Concert Series, held every summer at the Center, has brought us the best folk singers and performers in the country.

And there have been community lunches, free legal counseling, free Yoga, free tutoring and an instrument lending library for kids, and a Hootenanny on Thursday nights. The Guthrie Center has created an environment where individuals can come together to cultivate a deeper awareness of culture, humanity and the environment of which we are all a part. The Guthrie Center has captured the true spirit of the Berkshires.

But, the coronavirus pandemic has struck The Guthrie Center hard. The Troubadour series, which was the financial engine of the whole enterprise, had to be cancelled this summer, and now the Center does not have the resources to continue without an influx of community support.

Enter Matthew Penn and his effort to let more people know why The Guthrie Center is well worth saving. Penn is a director of theater, television and film. He has directed episodes of some of television’s most iconic shows, such as The Sopranos, Damages, NYPD Blue, Orange is the New Black, and Law and Order, for which he received a Best Director Emmy nomination.

But, most relevant here, his Berkshire roots run deep. Matt has served for 12 years as co-Artistic Director of the Berkshire Playwrights Lab, and has directed plays at Shakespeare & Company, Berkshire Theatre Group and Barrington Stage Company.

Matt has directed a new 8-minute film that features Arlo and tells the story of The Guthrie Center. Click this link to watch it. (Be sure to activate your Flash Player.)
Or watch it at The Guthrie Center’s website.

And then, if you click here and make a donation of $25 or more, you will have access to the Exclusive Musical Performance by Arlo Guthrie and Friends.  Arlo and friends recorded 7 songs, some of which have never been performed by Arlo before!

Without increased community support, the clock is definitely ticking for The Guthrie Center. Donations at any level from $25 and up are welcome.