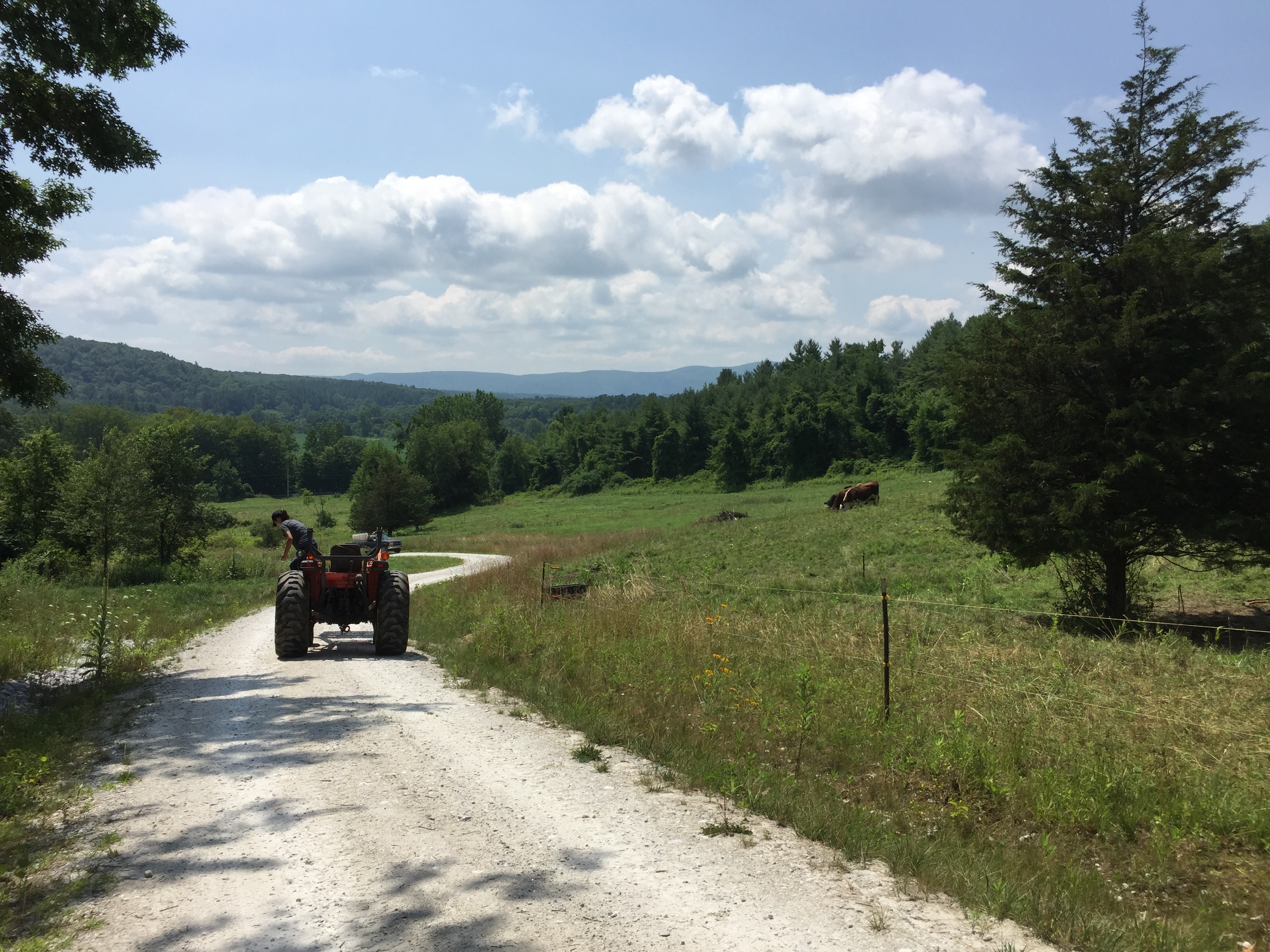 The view between pastures of the Farm New Marlborough, on the site of the former Colburn School. Photo: Kate Bailey

Note from Barbara Zheutlin, executive director of Berkshire Grown: The Berkshires are much loved for the pastoral beauty of the region. This gorgeous landscape attracts visitors and development, producing a rich culture, while simultaneously raising the cost of land. The high cost of land is one of the many challenges facing farms, the farms that are at the heart of the beauty of the Berkshires. So a challenge to all who treasure the Berkshires is how to sustain the old and new farms of the region that make the Berkshires extraordinary. In this series you will “get to know your local farmers,” the individuals who grow the food you eat and care for the land you see.

Our day began at the old Kolburne School, where we met up with Tom Brazie and three industrious interns, to feed and water the pullets that were temporarily occupying several classrooms. He bought the school, which sits on 140 acres, last June. We chatted with the interns, Emelia Fedell, Clio Bersani and Lucy Cliff, who valued getting the opportunity to see where their food comes from, but said it was “hard work”! The latter two came to the farm via the Greenagers program, which provides outdoor jobs for Berkshire youth. Our next stop was the baseball field, where broiler chickens were moved, fed and watered daily — the chicken tractors slowly making their way towards first base. The backstop had signs with words like “caring”, “responsibility”, and “respect” — a fitting emblem for the type of farming that Tom practices.

Tom Brazie had dabbled in farming his whole life, owning a milking cow and some chickens, tending a garden… In fact, his family history of farming in New Marlborough dates back to the mid-1700s. Until recently, Tom ran a landscaping business as his primary work; however, his life changed in 2010 when he saw the documentary film Food Inc. He was inspired by farmer Joel Salatin’s method of rotating his animals on his pastures to heal the soil. Brazie sought to learn more about how Salatin farms – traveling to hear him speak, and to see Salatin’s Polyface Farm in Virginia. The premise behind rotational grazing is that first the cattle graze, eating the grasses and leaving their cow patties behind. Then come the chickens, which eat the grubs and fly larvae, eliminating parasites and spreading the cow’s manure. This system of managing the animals and the land is healthier and more sustainable for everyone involved. When the chickens follow the cows in the pasture, Brazie says he can rotate the cows through the same pasture again in three weeks. Without the chickens’ involvement, the cows won’t eat the grass that grows up where their manure was for a whole year.

Brazie has put rotational grazing into practice on three stunningly beautiful sites that he farms in New Marlborough. On a warm July morning, we were lucky enough to get an opportunity to participate in the action, helping to reset the chicken fencing and herd the cows to new pasture. Enjoy a sneak peek into our morning at The Farm New Marlborough!