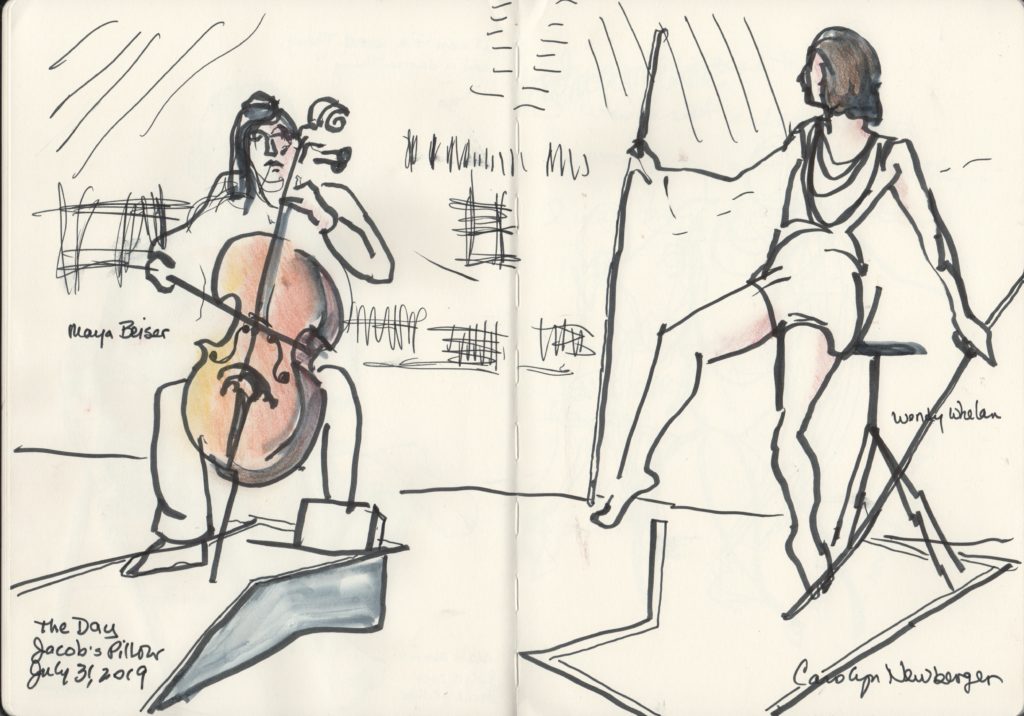 Cellist Maya Beiser occupies the platform, where perhaps she can see what the dancer cannot: the world of loss that contains the living lives. Wendy Whelan dances the words that bespeak those lives, beginning, “I remember when I…” Drawing by Carolyn Newberger

Imagine maybe 3,000 people getting up in the morning, passing their day, and then reflecting on the day that just passed.

Each is a person, an “I” with accomplishments, regrets, observations and surprises that, at the end of the day, is a note to the self, both simple and complex, a little piece of daily humanity of a person, ordinary and yet unique and precious.

Performed last week at Jacob’s Pillow, “THE DAY” is a poem of words and music by David Lang that completes the sentence “I remember the day I…” using about 300 simple phrases beginning with “I” gleaned from the internet. These spoken words, along with Lang’s keening cello score played by Maya Beiser and the unfurling movements of Wendy Whelan (choreographed by Lucinda Child), mourns with devastating understatement the magnitude of loss when the Twin Towers fell Sept. 11, 2001, turning to ashes all those living, breathing, feeling, innocently unaware, engaging lives within. 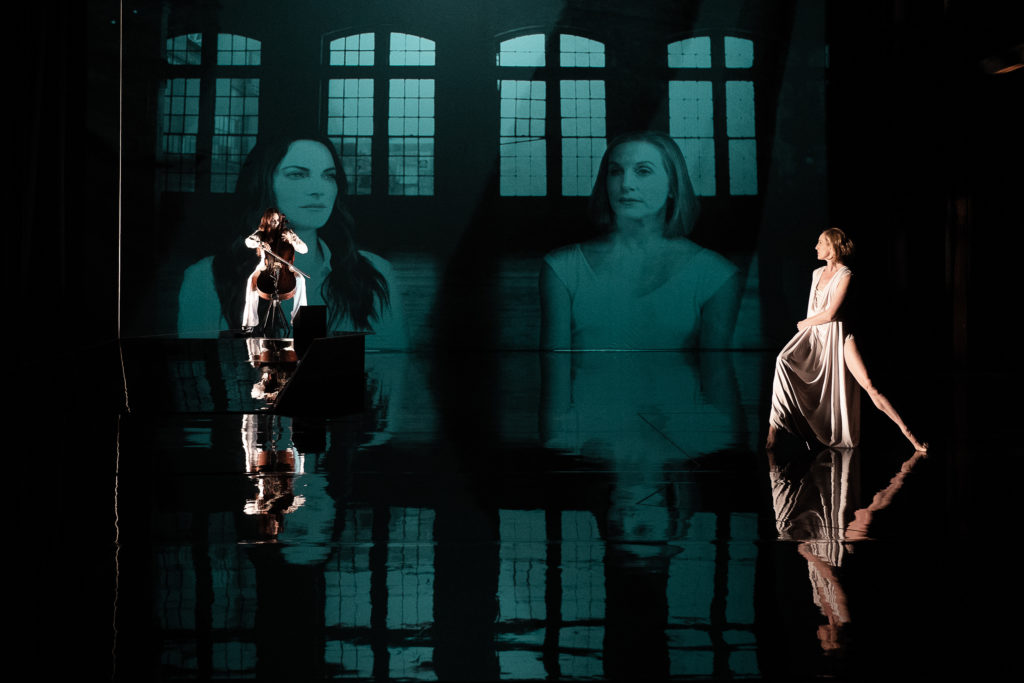 Wendy Whelan and Maya Beiser in “THE DAY” with choreography by Lucinda Childs and music by David Lang. Photo: Hayim Heron

“THE DAY” unfolds in two sections. In the first, both cellist and dancer are clad in white. Whelan’s boyish shorts and loose shirt and drape are soft and comfortable. Projected onto the back wall is a room of windows with large projections of Beiser and Whelan making the poem’s statements in matter-of-fact voices:

“I found out my marriage was over.”

“I heard about his murder.”

As a dancer, Ms. Whelan is in serene, focused, perpetual motion as though flowing through the words, a 6-foot-long slender stick in each hand extending, counterpointing and anchoring her movements, creating a linear geometry against the curving movement of her body.

The cellist, Maya Beiser, though, creates a more somber, intense mood, with keening, repetitive riffs built on a D-minor pentatonic scale, rising and falling in intensity through the work, culminating in dazzling, rhythmic bass pizzicatos beneath cascading loops of echoed lines. Passionately performed with unerring accuracy and with perfectly voiced rapid vibratos up to the high harmonic range, composer Lang’s partially improvised framework is allusively Hebraic, with references to the Kol Nidre prayer from Jewish liturgy, traditionally played on a cello at a service to honor the dead. It’s as though a premonition of tragedy is wailing through the cello, of death not in the normal course of life, but as a gash through the fabric of time.

As the poem continues from a voice offstage and life goes on through movement and words, projected behind are new scenes, most notably one that lingers but is hard to discern. Finally we make it out. It’s a vast airport terminal with vaulted ceilings, all slightly out of focus, but persisting through all those lives telling us about the day that they remember when.

On the stage are two spaces, demarcated in white on the shiny black floor, perhaps representing the Twin Towers. In the right space sits a simple black stool. The left space contains a ramp that lifts to a platform on which sits the cellist on her own stool. Ms. Whelan occupies the lower stool and the space around, crossing the boundaries of the white lines to enter and exit the surrounding stage world, but always beneath the physical and metaphorical higher view. The cellist occupies the higher ground, where perhaps she can see what the dancer cannot: the world of loss that contains the living lives.

As “THE DAY” unfolds, we become enveloped in its relentless, hypnotic sound and movement. There are no spaces, no rest. As in our own lives, we become full of “THE DAY.” But at the end, “THE DAY” erupts into the booming, roaring sound of collision and the crackle, crunch and tinkle of large-scale collapse. The back wall fills with smoke and falling debris. At the end of the scene, Ms. Whelan is pulling on a thick white rope protruding from the stage’s right wing. The long slender sticks are nowhere to be seen. She pulls and pulls, but the rope appears elastic. It stretches and stretches, and then darkness and silence.

The second section opens to dancer and cellist clad in black. Now Ms. Whelan occupies the higher ground, the platform, perhaps, of knowledge and remembrance. Ms. Beiser and her cello occupy the lower stool where the cello’s laments intensify, almost unbearingly, into slashes of bow across strings and repeated pentatonic incantations that seem to reach back into the dawn of time. Premonition has become confirmation, to devastating effect. Ms. Beiser begins to sing, a long, breathy note, then another a third above, and joining recorded loops of her song, rising in minor triads superimposed with increasingly dissonant overtones that extend into the beyond. She stands and turns her back to the audience. Her work is done. 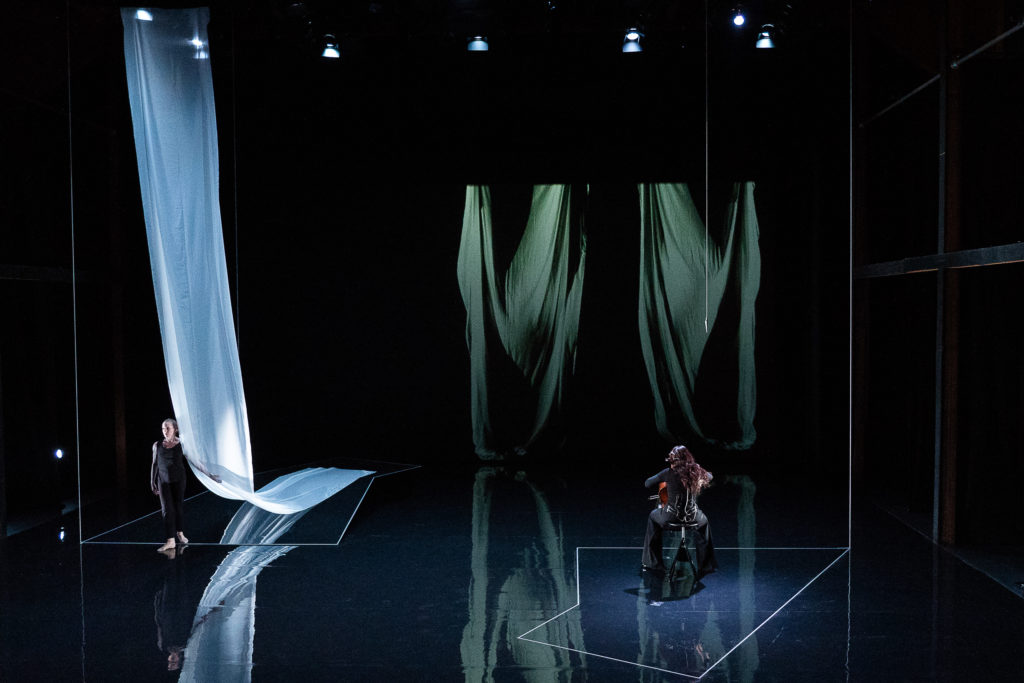 Wendy Whelan and Maya Beiser at the end of ‘THE DAY’ with choreography by Lucinda Childs and music by David Lang. Photo: Hayim Heron

On the other space, a bolt of muslin unfurls from the ceiling. Ms. Whalen smooths and lays it carefully along the platform, and then, climbing to the top, lays down across its breadth and rolls, slowly, to the bottom, now shrouded. She is laid to rest. Ocean rolls on the wall behind, and then fades to the original image of the room with the two women intoning their “I remember the days…” Two columns of muslin roll down the image, fall and dissolve into cloud.