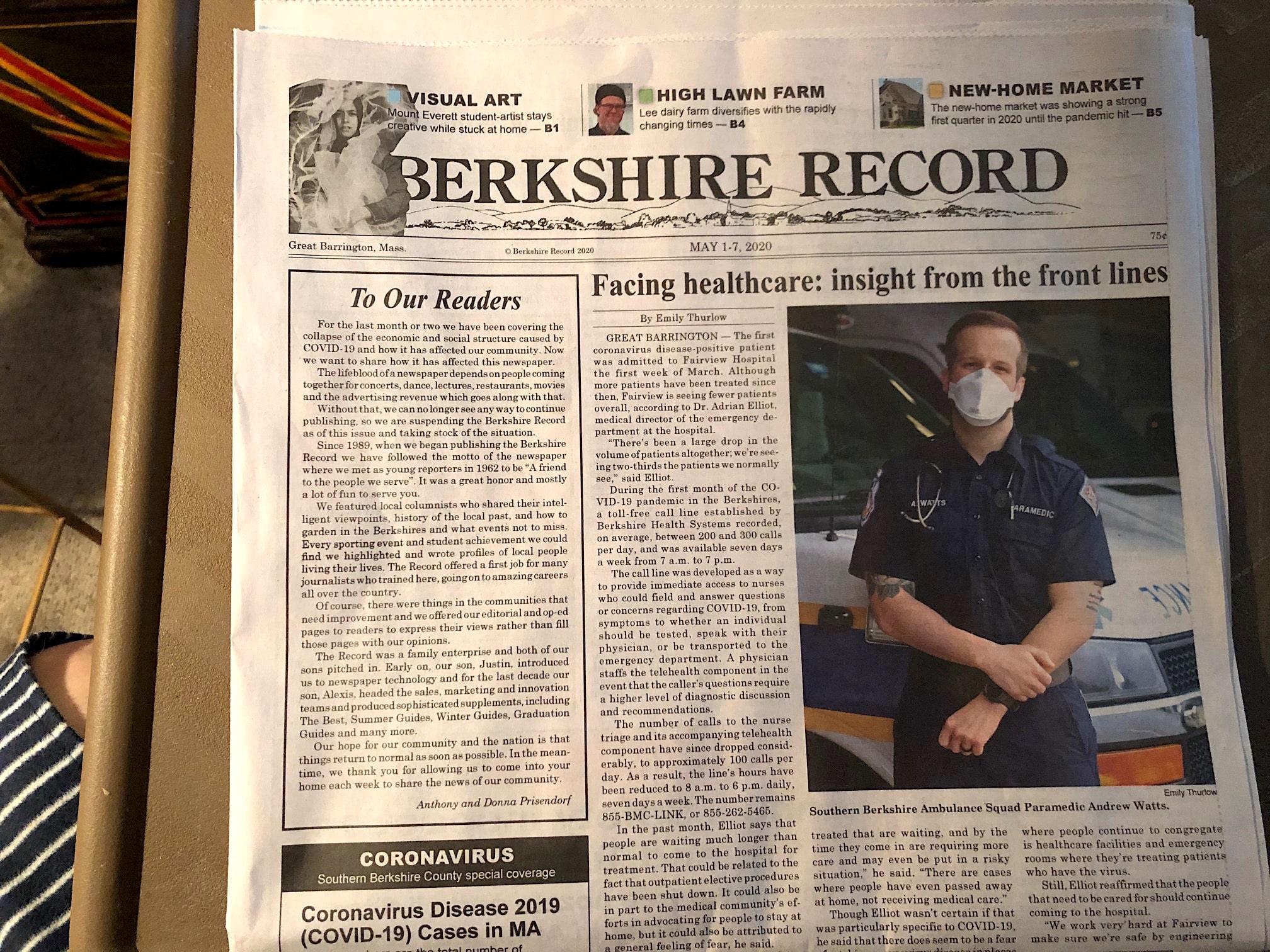 The front page of the final edition of the Berkshire Record, the Great Barrington-based weekly newspaper that announced Thursday that it would suspend publication in the wake of the economic misery inflicted by the COVID-19 pandemic. Photo: David Scribner

“The lifeblood of a newspaper depends on people coming together for concerts, dance, lectures, restaurants, movies, and the advertising revenue which goes along with that,” the Prisendorfs said. “Without that, we can no longer see any way to continue publishing, so we are suspending the Berkshire Record as of this time and taking stock of the situation.”

It is not clear whether the independent paper will resume publication when economic conditions improve after the current COVID-19 pandemic recedes. The Record began publication in 1989 and eventually moved its headquarters to a yellow building on Elm Street, near Carr Hardware and Berkshire Bank.

Limestone Communications, the Record’s holding company, also published several other revenue-generating publications, including Best of the Berkshires, and a series of guides for the seasons. The Summer Guide, for example, included news and listings of the various cultural venues in the Berkshires, but without those events, many of which have been canceled or are in doubt, news and advertising would have been scarce.

With schools closed in mid-March by order of Gov. Charlie Baker, the Record suspended its popular high-school sports section, an important source of revenue, and laid off its sports editor. The Prisendorfs’ son Alexis became the lone advertising sales representative listed on the masthead.

The Record employed mostly younger reporters, some of whom went on to distinguished careers. The paper was known for its sometimes aggressive coverage of local government, its sports section, an editorial page that featured letters to the editor, local columnists, and a thumbs-up-thumbs-down section in which anonymous readers could sound off briefly about triumphs or issues of concern.

The closing of the Record leaves Berkshire County with only two traditional print newspapers: the daily Berkshire Eagle and the weekly Pittsfield Gazette. The Record was printed at the Eagle’s Pittsfield presses, so the Eagle, which is also struggling in the current economic climate and is borrowing money from the federal Paycheck Protection Program to remain solvent, will lose an important commercial printing account. The loss of the Record also further accelerates the decline of print media in Berkshire County.

The daily North Adams Transcript closed in 2014 when it was folded into the Eagle. The Advocate Weekly in Williamstown was closed the same year. The online iBerkshires.com survives and covers northern and central portions of the county. The Advocate was acquired from Boxcar Media, iBerkshires’ parent company, in 2005.

The Edge covers news and culture in Berkshire County, with a focus on the southern portion. The aforementioned Eileen Mooney publishes the NEWSletter, a monthly print publication that covers the town government of Great Barrington and the Berkshire Hills Regional School District.

Reynolds told The Edge he was saddened to receive an email from the Prisendorfs Thursday morning announcing the suspension of publication but was grateful for the opportunity for his voice to be heard.

“There is nothing more sacred than stories, as they help us communicate, connect and unify by reminding us all of our similarities and letting us know that we are not alone in our human experiences, emotions, and interactions,” Reynolds said. “Cherish the memories and tell the stories.”

In an email to contributors, the Prisendorfs said: “After publishing for 31 years, closing the Record was the hardest decision we ever made. But when the virus smothered local business, advertising dried up. As Pete Seeger put it in his ’50s song, ‘To everything there is a season, and a time to every purpose, under the heaven.'”