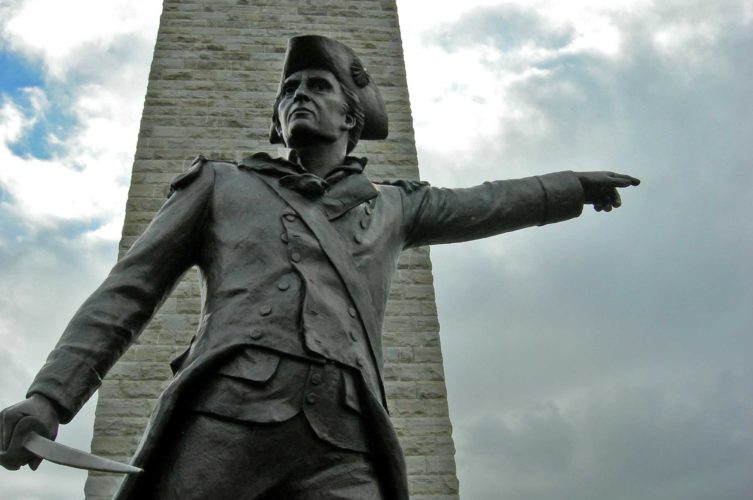 The statue of General John Stark, who led the patriot troops at the Battle of Bennington, before the monument to the battle.

Vermont recently celebrated (for the 243rd time) the Battle of Bennington, a critical win for the patriots that took place over the New York line near Bennington on August 16, 1777, and in which, according to historian Lion Miles of Stockbridge, 735 men from the Berkshires took part. This year, Bennington’s traditional downtown Fire Department parade had to be cancelled due to the pandemic, so a group of local citizens (I was one) stepped into the breach, with the Fire Department’s blessing and assistance, to mount a different kind of commemoration.

There were fireworks, a talk on the 19th amendment, a guided tour of Old Bennington, an impressive reverse parade, cannon fire provided by a group of artillery re-enactors, a Black Hawk landing, and a ceremony honoring essential workers at the Vermont Veterans Home in Bennington that included Vermont poet laureate and Bennington resident Mary Ruefle reading poems by Dickinson, Frost, and herself.

In remarks at the ceremony, Vermont State Representative Mary A. Morrissey made reference to a Black soldier named Sipp Ives from New Providence (now part of Cheshire) in the Berkshires who was among the 30 patriots killed at the battle. It was a moving moment when later in the ceremony Southwestern Vermont Medical Center ER nurse Patricia Johnson, who is Black, spoke of what learning about Ives’s death in Vermont’s iconic battle meant for her (Ives was a member of Col. Seth Warner’s Green Mountain Boys, no less). Only recently has an obscure reference in a pension file to “a black man on the ground that was mortally wounded” at the Battle been connected to Ives, by Lion Miles.

Ives was not the only Black patriot to fight at Bennington, but the Black presence at the Battle is greater still if one simply follows the rum.

You could think of rum as the official drink of the Battle. Surely it would have been, if official drinks had been a thing in 1777 (and in case you’re wondering, the official state beverage of Vermont, so designated in 1983, is milk). A popular Bennington watering hole, the Miller’s Toll, serves up a Stone Fence, a combination of dark rum and hard cider; the menu claims that it was drunk by the Bennington militia before the Battle. It’s a plausible conjecture.

Rum, distilled from molasses, was the leading spirit of Revolutionary times. Soldiers and sailors drank it on the job as part of their daily rations. So did fishermen, lumbermen, and builders, to judge from an entry made in the 1770s in an account book for the construction of Safford’s Mill in Bennington preserved in the Bennington Museum. There two gallons of rum are entered as having been “drinct” by the men who were constructing the mill.

General John Stark, who led the patriot troops at the Battle, requested a supply of rum from the New Hampshire legislature, noting that “There is no such article in them parts where we are a-goin.” It turned out that there was rum in them parts, but Stark complained at Manchester that it cost 20 shillings a quart. He later reported that “two hogsheads and a barrel” of rum (around 150 gallons) sustained his troops at the Battle, which they “much needed.” One officer remarked that Stark broached one of those hogsheads after the first engagement, but that his men “tarried not to taste it, but rushed on the enemy with an ardor perhaps unparalleled” when the British reinforcements arrived: duty before rum.

Or not. Brunswick surgeon’s mate Julius Wasmus, captured by the Americans at the dragoon redoubt on top of “Hessian Hill,” recorded in his journal that his captor “urged me to drink some strong rum with him. The enemy [that’s us] were very well provided with it and I noticed that all of the men were drunk.” The Americans all carried a wooden flask filled with rum, Wasmus said; the rum was usually mixed with water. Col. Seth Warner’s regiment of Green Mountain Boys refreshed themselves with rum and water at Stark’s camp before heading into battle and turning the tide against the British reinforcements. Each man drew a gill of rum. That’s four ounces, or four shots, if you prefer. Those men courageously charged the enemy when Warner gave the word, and the enemy fled before them.

It was a stunning American victory. Stone Fences all around!

Now for the bill.

Those New Hampshire militiamen had to be paid. So did General Stark. Moreover, the men were to get their first month’s pay (four dollars) of their two-month enlistments in advance. And the New Hampshire treasury was bare. The story of what happened next depends on a single source and was recorded 51 years after the event, but the source had been present and had “often related” it. Patriot John Langdon, a prosperous merchant from Portsmouth who was serving as the Speaker of the New Hampshire Assembly, rose and personally pledged three thousand dollars in cash, his household silver (worth an equal sum), and the proceeds from the sale of 70 hogsheads of Tobago rum (that’s 4,200 gallons) from his warehouses. 1,500 men enlisted within days.

Where did Langdon’s money come from? It came from the maritime trade in which he had been engaged for many years as sea captain, shipowner, shipbuilder, and investor, not least in privateering ventures. Langdon financed trading voyages to the West Indies (the Caribbean) and England. His ships carried provisions such as pork and fish, lumber, barrel staves, and other goods from New Hampshire to Jamaica, Barbados, Hispaniola and other West Indian islands. More than 80% of New Hampshire’s exports went to the West Indies. Langdon traded his goods for rum, molasses, and sugar. These commodities went in turn to London, Africa, and colonies along the Atlantic seaboard. Unlike his fellow Portsmouth merchant (and signer of the Declaration of Independence) William Whipple, Langdon did not deal in slaves, only in the products of their forced labor.

The elixir of victory at the Battle of Bennington was, literally, the distillation of a global economy in which the enslavement of Africans and the wealth created by slave labor played an indispensable role.

This was the world that Columbus discovered – or rather, helped create – in 1492 and on subsequent voyages. He didn’t discover America; he discovered the West Indies. He didn’t find much gold; he found a place to cultivate sugarcane. Columbus carried sugarcane seedlings from the Azores with him on his second voyage. In his diary, he envisioned enslaving the native population of the islands. Producing sugar takes a lot of labor, and the elements of the sugar-slave system had already been developed in medieval Italy and Cyprus, and on the islands off the northwest coast of Africa. Columbus knew well how the system worked; his father-in-law was a sugar planter on the island of Madeira.

It wasn’t long before slaves were being sourced from Africa to plant, tend, harvest, and process sugarcane in the West Indies. The first of them arrived in 1505, but it was the British, French, and Dutch in the 17th and 18th centuries (and the Portuguese in Brazil) who developed the plantation system on a scale that enslaved twelve million African men, women, and children. In 1770, the island of Tobago, the source of Langdon’s rum, had a population of 209 whites and 3,090 mostly enslaved blacks. For the enslaved, the regime was brutal. Three slave rebellions on Tobago were violently suppressed in the early 1770s.

Distilling West Indian molasses into rum was the leading manufacturing industry of colonial New England. By 1774 there were 63 distilleries in Massachusetts alone, producing annually almost three million gallons of rum. It was rum that made the New England economy hum, or rather, it was the system of enslaved African labor in use in British New World colonies from the West Indies to South Carolina to Virginia to New York and, yes, New England, that helped generate the wealth that led to fortunes like John Langdon’s. Slave-owning planters like George Washington and Thomas Jefferson benefitted directly from the Anglo-American slave economy. So, at second hand, did John Langdon and even General Stark.

Maybe we shouldn’t have had so many Stone Fences. But it’s our history, and we have to own up to it and shape its course for the better going forward. Vermont took a step in that direction when it abolished adult slavery in its Constitution of July 1777. A month later, Americans at the Battle of Bennington dealt a disabling blow to Burgoyne’s advance and helped turn the tide of the war. Toward the end of his life, in a letter to the men he had commanded at Bennington, General Stark looked back on what it all meant. He wrote: “As I was then, I am now – the friend of the equal rights of men, of representative democracy, of republicanism, and the Declaration of Independence, the great charter of our national rights: and of course the friend of our indissoluble Union and Constitution of the states.” We can all drink to that.

Phil Holland lives in Pownal, Vermont. He’s the author of A Guide to the Battle of Bennington and the Bennington Monument and a contributor to the Berkshire Edge Magazine.