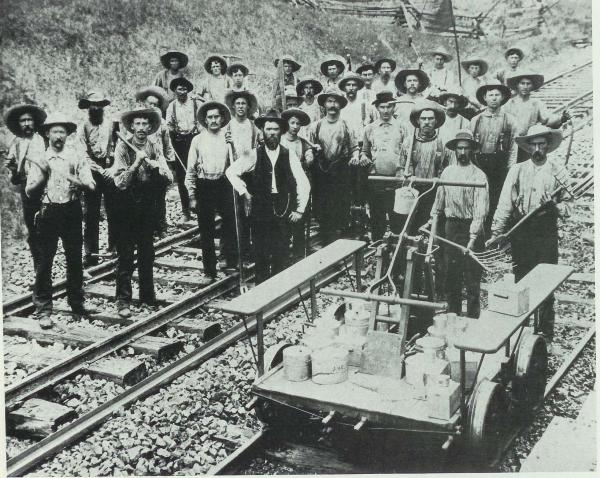 The laying and maintenance of track was backbreaking, unrelenting work. Employing thousands, it provided jobs for generations fo unskilled workers, many of them immigrants and African Americans. Photo courtesy of the Railroad Museum of Pennsylvania. Operated by the Pennsylvania Historical and Museum Commission.

‘The American’s Book,’ the immigrant railroad worker’s guide to citizenship

From its beginnings in the early 19thcentury, the Pennsylvania Railroad, like nearly all early industries, had the need for many laborers for the major construction projects underway, and for the maintenance of the projects that had been completed previously. Fortunately, there were a large number of immigrants from Europe who had arrived in the United States earlier for mining operations and for the construction of canals and earlier railroads that were available for work. By 1913, some one-third of the foreign-born workers on the railroad were of Italian ancestry.

In 1913, the railroad hired Vincent Colelli to further the education of these Italian immigrants by developing Italian/English language courses that would help them on their way to learning to speak and write English and to eventually obtaining United States citizenship. While the railroad’s  encouragement toward citizenship was touted, there can be no doubt that a major purpose of the English education was to increase their knowledge of safety practices and railroad operations, the implementation of which would help reduce railroad costs. The railroad had issued some 13 pamphlets for these workers with safety instructions, the proper way to use tools, accident prevention, and related topics. 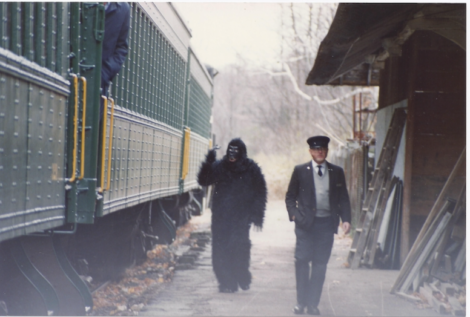 The author, at right, at the Lenox Dale station, duirng a Halloween excursion of the Berkshire Scenic Railway.

Colelli was of Italian birth, and a Yale graduate (class of 1911) with Bachelor of Arts and Bachelor of Science degrees. He reported to J. C. Johnson, who was Superintendent of Telegraph and in charge of all railroad education courses (possibly related to the education required of telegraphers and dispatchers). Colelli was headquartered in Philadelphia, and soon had some 3,000 Italian-speaking employees taking correspondence courses in English.

In a paper he presented at the Railroad Sessions of the National Safety Congress, he reported that he found that many of the Italian track-maintenance laborers had earned technical degrees in Italy, but were not promoted to higher-level jobs because of their inability to communicate proficiently in English.

In 1923, Colelli published “The American’s Book” as a primer for obtaining American citizenship. The title page indicates that he was “In Charge of the Education of Foreign-Born Employes (sic) on the Eastern Region of the Pennsylvania Railroad.” The publication was dedicated to his “first teacher in English at the American-International College, Springfield, Mass.”

The 5- X 7-inch paperback booklet contains 83 pages of valuable information. Included are a brief review of United States’ history; a description of the various forms of government in the United States; the requirements for citizenship; the “Declaration of Independence” and the “Constitution”; a center-spread United States map; Washington’s “Farewell Address”; “The Star-Spangled Banner;” Lincoln’s “Gettysburg Address”; Theodore Roosevelt’s “Last Message to the American People”; the words to “My Country ‘Tis of Thee;” “The American’s Creed”; a list of the Presidents; and a list of the states, capitals, and number of Representative from each. No doubt, the paperback and small size format were directed to laborers who wanted to keep a copy in their overalls for a quick peek during working hours. 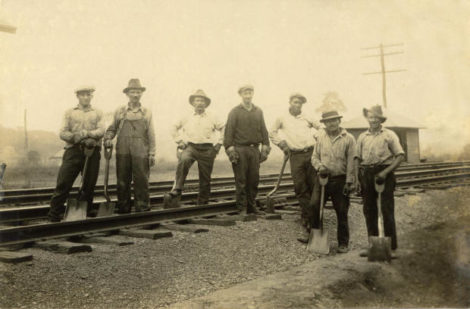 Entire communities within the cities through which the railroad system operated were founded by migrants from many countries. With thanks to “The American’s Book,” many of the progeny of those migrants rose to prominence in business, industry, and government.

(My father, John L. Trowill emigrated from England in 1907, and was hired as a laborer by the Pennsylvania Railroad in 1918. He was naturalized in 1922, just before Colelli’s booklet was published. But, since the booklet was in his “library,” he, too, probably learned much of what he needed to pass the citizenship requirements from Colelli’s teachings. He later rose to become System Supervisor of Electric Locomotives.)

Jack Trowill of Pittsfield, Mass., grew up in a family of railroaders, earned a Bachelor of Electrical Engineering from the University of Delaware, and worked for GE/Lockheed Martin for 37 years. He has been volunteer — and conductor — at the Berkshire Scenic Railroad.