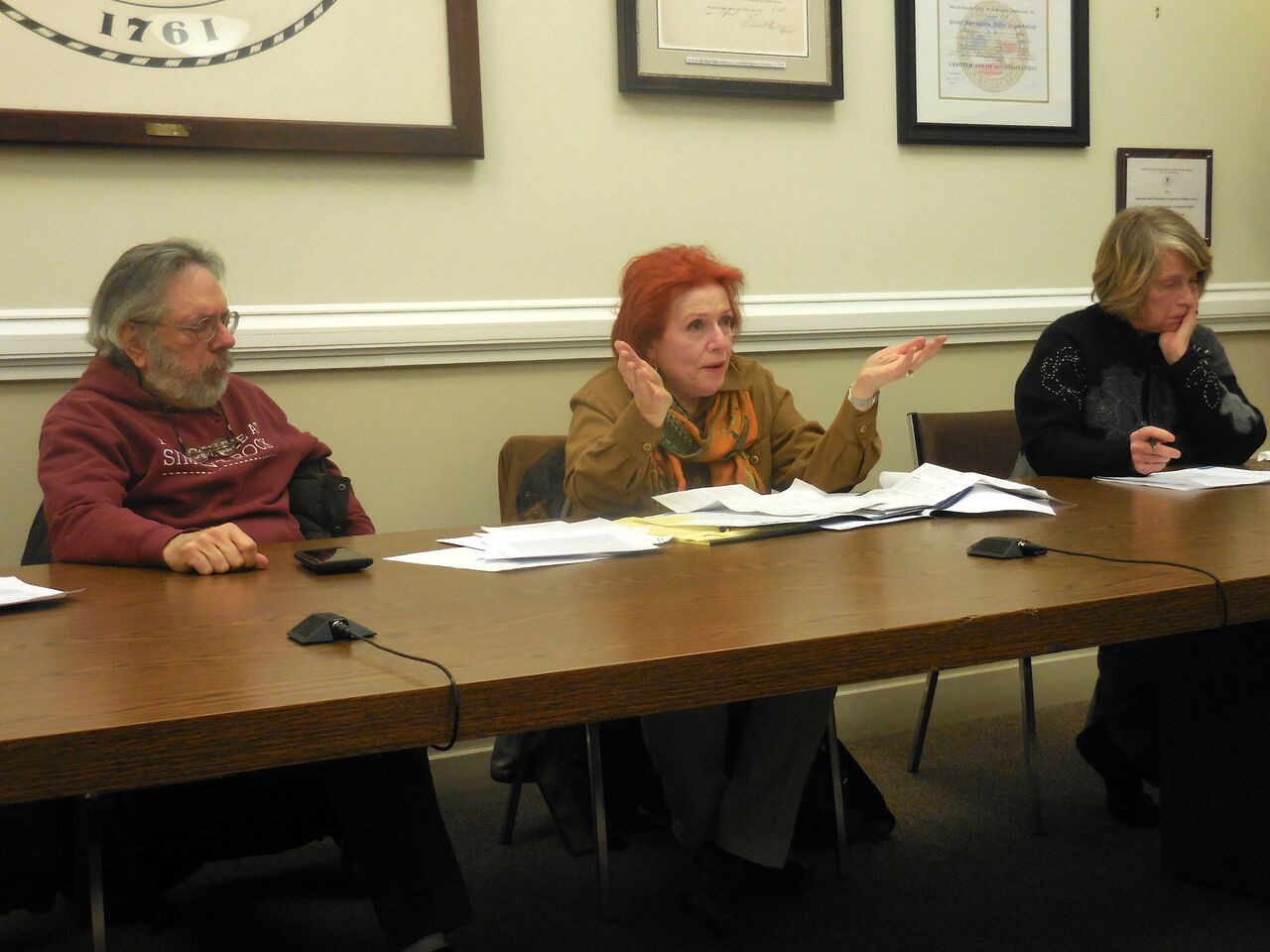 Linda Miller, who chairs the Five Town Cable Advisory Committee and represents Lenox, explains why she thinks discussion of a letter from a lawyer hired by the committee should be discussed behind closed doors. To her right is member Steven Moritz of Lee and to her left is Rene Wood of Sheffield. Photo: Terry Cowgill

Great Barrington — The Five Town Cable Advisory Committee has abandoned its strategy of taking Charter Communications to court over the company’s insistence that some cable-television subscribers rent new set-top boxes from the company.

The decision came at an unsual meeting Monday night (Dec. 19) at Great Barrington Town Hall in which committee Chairwoman Linda Miller had intended to take the panel behind closed doors to discuss what she called “litigation strategy.”

But Rene Wood, who represents Sheffield on the panel, objected to the proposed executive session in the strongest of terms, calling it “illegal” and “a violation” of the state’s Open Meeting Law.

“There is no ongoing litigation,” Wood said. “We cannot go into executive session to discuss the possibility of litigation, nor an attorney’s opinion.”

The opinion was one Miller had recently obtained from William Hewig III of KP Law (formerly Kopelman & Paige), a Boston-based firm used by municipalities across the state.

The committee had sought the firm’s advice in assessing whether it should consider a lawsuit against Charter for encrypting its signal and insisting that its basic cable TV customers rent a decryption box for $6.99 per month.

Hewig’s one-page opinion (click here to read it) concluded that existing law, including the federal Cable Communications Policy Act of 1984, renders the legal justification of the potential lawsuit “probably unenforceable.”

Hewig said the five towns represented on the committee – Lee, Lenox, Stockbridge, Sheffield and Great Barrington – should instead “turn to their legislators and representatives for relief.”

In one of the franchise agreements Charter – now called Charter-Spectrum – inherited last year from its $65 billion acquisition of Time Warner Cable, is that new “technological developments” will not be implemented unless they “can be done without adding a financial burden to subscribers.”

When Miller stated her intention to take the committee into executive session to discuss Hewig’s letter, Wood promptly objected and asked Miller which portion of the state’s Open Meeting Law exempted the subject from open session. Miller sighed loudly, pulled out a copy of the law, thumbed through and read the portion that addresses litigation.

The Open Meeting Law (click here to read it) permits executive sessions when they include “discussions concerning strategy with respect to ongoing litigation.” Furthermore, “discussions relating to potential litigation are not covered by this exemption unless that litigation is clearly and imminently threatened or otherwise demonstrably likely.”

None of those cases applied to the subject of Hewig’s letter, nor was the reason for the proposed executive session listed on the agenda as required by OML. Wood insisted that she would file a complaint with the state attorney general’s office even if the closed-door session was not held because the agenda itself was a violation because of its lack of specificity.

“I just think its detrimental to us, to our position, to do this in open meeting,” Miller said, her voice rising. “But if Rene is that uncomfortable with it, we’ll do it and then we’ll blame it on Rene. Fine, we’re gonna do it open.”

As for the move by Charter to require set-top boxes for all cable TV customers, even those who had previously plugged the coaxial cable line directly into their sets to receive the basic lineup of channels, there is a history behind it.

Charter announced the change last year, not long after completing its acquisition of Time Warner Cable. At that time, the company said it would offer the decryption boxes free for the first two years. After that, customers will pay $7 per month to rent them.

At a meeting of the Five Town Cable Advisory Committee at the Great Barrington fire station in September 2016, Charter representatives explained that the company is encrypting its signal in order to prevent the piracy of services through splitters.

If the signal requires decryption through a set-top box, then theft of service will be far more difficult. That is also one of the reasons Charter is renting the boxes to customers rather than offering them for sale, Charter said.

Both Miller, who represents Lenox, and fellow committee member Steve Moritz of Lee said they have checked with the Berkshire County District Attorney’s office and learned that cable piracy is rarely if ever reported.

Committee members view the box rental as a back-door rate increase, or a way to increase profits without applying to regulators for a real rate increase, all the while forcing those at the lower end of the cable-to-consumer hierarchy to spend hundreds of dollars more per year for bare-bones, entry-level service.

In its report to the committee this week, Charter denies that it has breached its license or franchise agreement with the towns and considers such concerns “misplaced.”

After the sharp exchange and a brief discussion of the Hewig letter, the committee moved on to discuss rate increases announced by Charter – or what the company called “price adjustments,” which will be reflected in billing as of Sunday, Feb. 1, 2018. Click here to see them.

There was also considerable grumbling about Berkshire County being included in the Albany, New York, television market, resulting in very few stations from Springfield or Boston in the channel line-up and, therefore, a dearth of news coverage concerning Massachusetts.

Charter representatives are quick to point out that the predicament was not of their making but is a matter that needs to be taken up with the Federal Communications Commission.

The decision to place Berkshire County in the Albany designated market area was made before cable when most people watched television channels that broadcast over-the-air. Berkshire County is closer as the crow flies to Albany than to Springfield, and Albany channels can theoretically be watched without cable. Bennington County, Vermont, faces a similar problem since it is closer to Albany than to Burlington.

Last year when WWLP Channel 22, the NBC affiliate in Springfield, was pulled from Charter’s Berkshire County line-up, Sens. Ed Markey and Elizabeth Warren, along with Rep. Richard Neal of Springfield, wrote letters to Charter urging the company to keep channel 22 in its line-up, but to no avail.

See video below of Christopher Ketchen, chief administrative officer of the towns of Lee and Lenox, explaining that he and the other town managers are eager to help with issues of concern about Charter: