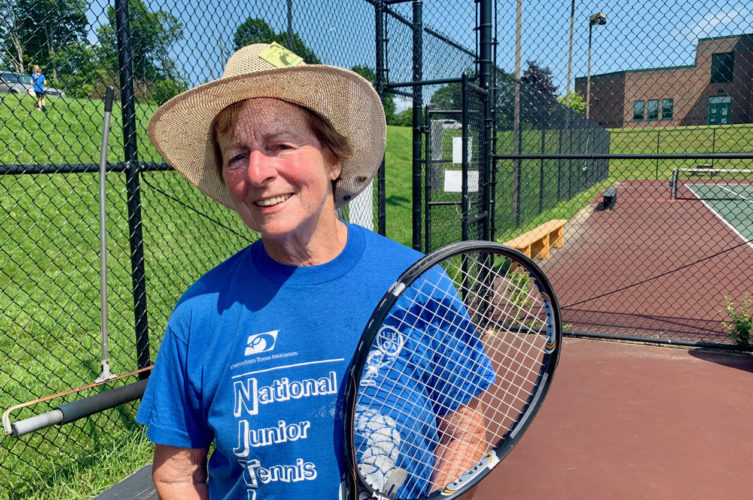 I love tennis. Hitting the ball with a competent stroke, that irresistible thunk when it hits the racquet’s sweet spot, whoosh — the ball gliding just over the net with a graceful backspin. It’s addictive. They call soccer the “beautiful game.” It is indeed. Come the World Cup, I’m glued to the set like a kiddo watching Saturday morning cartoons in the day. But tennis? It’s the gorgeous game.

Tennis ranks among those sports, like golf and skiing, that turns otherwise responsible citizens into daydreamers willing to play hooky if necessary to get a game in if the weather’s just right.

But if you’re new to town, or looking to shake off a bit of rust from a couple of years of a tennis holiday, what to do? If golf’s your game, you can just join a club or introduce yourself at a public course. Softball? There’re leagues for that. Ski? Head for the slopes.

But tennis? It’s a bit more complicated than that, especially in a rural area like South County. Generally, you need to know other people to get a game going, let alone a weekly game. And that takes time.

A good place to start are the community tennis associations — informal volunteer organizations led by a few selfless souls who simply adore the sport and are eager to encourage others to play it. Top of that list by any measurement is Clare “Bunnie” Lahey, fondly known as “Coach Bunnie” to generations ¾ yes, generations plural — of South County youngsters.

Bunnie formed the Lee Tennis Association (“LTA”) in the 1970s, back when a certain former star football player from the University of Michigan was President of the United States, and spent the following decades essentially creating a tennis scene in South County practically from scratch.

“Bunnie has dedicated her life to promoting tennis in Southern Berkshire County,” says Martha Klay, a one-woman hub within the South County tennis scene. “She encouraged little kids to start playing and to stick with it. Eventually they become excellent high school players and beyond. It’s why Lee High School always makes it to the championships. That doesn’t start in high school. That level of tennis starts at five years old. It starts when someone like Bunnie creates a tennis program for kids and whole community.”

“Nobody works harder than Coach Bunnie,” echos Brian Lavinio, a Williams College student and Pittsfield resident, who helps coach kiddos at the LTA. “She is the LTA. It’s her baby. She’s here at this courts more often than she’s at her house.”

If you want to start playing, the Lee Tennis Association is a great place to start. There’s an excellent tennis program for youngsters ages five to 16. It’s four-week schedule that typically runs from late June to late July and is very affordable. And that’s another thing about community tennis — it’s about community; not exclusion. Fees are always ridiculously reasonable, and scholarships are available if needed.

The LTA also has adult lessons with pros (for absolute beginners, too), adult drop-in clinics, mixed doubles, league play, and even a travel team. It’s essentially the one-stop shop for tapping into tennis, regardless of skill level, and reflects Bunnie’s values: inclusion, fair play, generosity of spirit, and integrity.

Another great place to start is the Berkshire Hills Tennis Association, which runs six weeks of tennis programming every summer at the Monument Mountain Regional High School courts, complete with tennis pro (parents typically help out if they feel like it, even fetching balls). The second half of programming starts July 26th and runs for three weeks on Mondays and Thursday evenings. Kiddos play from 5-6 pm, adults from 6:15 to 7:30. BHTA programming doesn’t extend beyond these handful of joyful summer evenings of play, but it’s a great place to make and meet tennis friends. The BHTA volunteers who help keep this program going this year are Barbara Watkins, Ellen Brodsky, and Gail and Leonce Roger.

And here’s an insider’s tip: there’s an informal group of men who meet for pickup games at the MMRHS courts on Saturday and Sunday mornings. The games are loosely organized by volunteer Peter Nikitas, who’s been sending out weekly emails for nearly 30 years to his group of “Tennistas” with weather updates and encouraging folks to come out and play. Morning play spans from warm-enough weather in the spring to warm-enough weather in the fall, which on a good year can mean St. Patrick’s Day to Thanksgiving. “If you’re an intermediate player, feel free to stop by and introduce yourself,” Peter says.  “Women are welcome, too.” Play typically starts at 9 a.m. and runs for two hours or so. Ever the gentleman, Peter often supplies extra balls (but please bring some) and always rotates players into games so that everyone gets a chance to play.

(There are standing women’s games on different days, and some mixed doubles as well, but you’ll have to earn your way into those private email lists.)

If you’re wondering where the public (free!) outdoor courts in South County are, they’re mostly here:

“There are public courts everywhere,” Lavinio says of South County. “Buy a can of balls, go out and play and have fun!”

Once outdoor play is over, there are two relatively local options for indoor play: the newly renovated Berkshire West Athletic Club on the southern end of Pittsfield across from the Bousquet Ski Area, and the Old Chatham Tennis Club. Both clubs have veteran pros known for the excellence of their instruction.