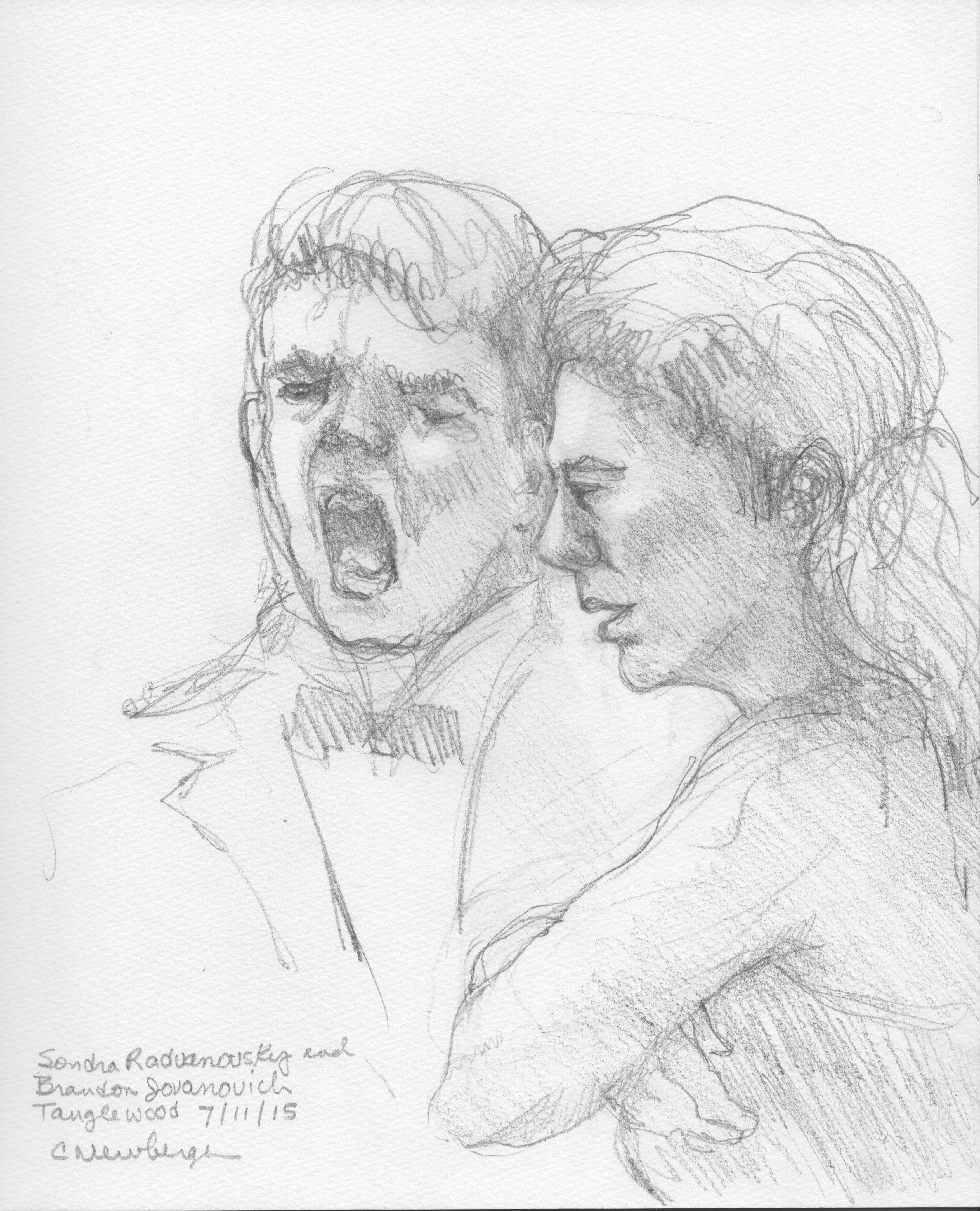 Lenox — Two nights after a wide ranging and generous recital at Ozawa Hall, on July 11, the justly celebrated bass-baritone, Bryn Terfel, brought his huge and resonant voice to the Tanglewood Shed, with solo arias from Verdi’s “Don Carlo” and “Falstaff” preceding a wondrous performance of Act I of Puccini’s “Tosca.”

In the latter, as the evil, love-struck police chief, Scarpia, Terfel was joined by his equal in power, projection, and personality, the Met soprano, Sondra Radvanovsky, a credulous, sensuous, volatile Tosca. She evoked the wizardry of Maria Callas to Terfel’s Feodor Chaliapin, along with a superb, last-minute tenor replacement, Brandon Jovanovich, as Cavaradossi, and a truly impressive supporting cast: bass-baritone, John Del Carlo as the Sacristan, the marvelous bass, Ryan Speedo Green, as Angelotti, tenor, Ryan Casperson as Spoletta, and the Tanglewood Festival Chorus and a children’s chorus, Voices Boston, along the Boston Symphony Orchestra, singing and playing their hearts out under the baton of Bramwell Tovey.

Stabat Mater began with Mary’s weeping at the foot of the cross on which Jesus was crucified, with unsparing lyrics and in astonishing expressive verisimilitude, combining decrescendo and rallentendo to create a sense of overwhelming sadness from the chorus.

weeping by the cross

where her Son was hanging.

A sword had pierced.”

Short phrases and single syllables gave power and tragedy to these images of death and loss, over continuously-flowing, ineluctably-progressing passages in the woodwinds and low brass, for whom the piece was virtually a concerto with voices. Perfectly, Tovey balanced the velvety brass ensemble sound both with the chorus and the orchestra. Allowing the trombones and tuba to be clearly perceived all through came as a revelation (because it was missing throughout James Levine’s tenure), deepening the profound emotionality of the text.

“She saw her sweet Son

as He gave up the spirit.

make me feel the power of grief

that I may lament with you.”

Stabat Mater built on the words and music of a medieval hymn. It conveyed to the heedful listener a message for all time and all mankind: Appreciate earnestly the love and travails of mothers. If they suffer trauma and loss, reach out to them with kindness. Sense and share their grief; and give them sympathy and care.

Bryn Terfel then presented two Verdi arias, the moving Ella giammai m’amo (“She never loved me”) from Don Carlo, and the over-the-top send-up of conventional morality, Eh! Paggio! Hey! Page! L’onore (“Hey, page! Honor!”) from Falstaff. The first was at once deeply mournful and exquisitely tender. A sweet and warm summoning from Martha Babcock’s cello contrasted thoughtfully with the vocal line.

But Eh! Paggio! L’onore! offered no sense of civility, or of empathy. Honor, in the view of the fat knight, was for show, evasive in meaning and contingent on the scheme at hand. Terfel gave him rip and roar, emphasizing in gesture, phrase, and bellow the strutting of a gentleman poseur. Honor is but a word, which can neither heal wounds nor mend broken bones. What’s more, it has zero meaning after life is over!

Verdi worked with his librettist friend and colleague composer, Arrigo Boito, on Falstaff between 1889 and its premiere in La Scala in Milan in February, 1893. The slow pace of completion was partly attributable to there being no need to rush, as they were composing and writing for their own amusement. But Verdi was keenly aware of his advancing years, and his depression, lapses in their communications, and their both suffering illness and the deaths of friends contributed as well.

Their letters, however, also reveal the joy, and no doubt relief, that they shared in reframing Shakespeare’s boffo comedy. Verdi wrote Boito in 1891:

Pancione, “The Big Belly” is on the road to madness. (Pancione was their nom-de-travail for the opera before they disclosed that it was based on Shakespeare.) There are some days when he does not move; he sleeps and is in a bad humor. At other times, he shouts, runs, jumps, and tears the place apart. I let him act up a bit, but if he goes on like this, I will put him in a muzzle and straightjacket!”

(Note: For yo,u dear readers, who view skeptically this reviewer’s seeking contemporary resonances from antique tropes, he can do no better to trump your argument than to point to the bellicose billionaire with the Clorox hair who fouls the American airspace. Were he to accept the role, Bryn Terfel would be superbly cast as this man of the hour, if only John Adams were to compose an opera about his quixotic journey.)

Tosca, the second half of this splendid concert, has special significance for both its lead singers. For Terfel, the role of Scarpia is often said to have been made for him, and vice versa. Critic William Harston of the London Express, for example, praised his 2014 performance in the Royal Opera House, which also starred Sondra Radvanovsky as Tosca:

“Bryn Terfel is quite simply the best Scarpia around, seeming to seethe with malice with every note. His stage presence is enormous, gripping the attention and combining with the music to create an instant mood of pure blackness whenever he enters.”

For Sondra Radvanovsky, it was a performance of Tosca that moved her to become a singer. By happy circumstance, she and her mother were watching television when she was about 12 years old. They accidentally came across a performance of Tosca in which Placido Domingo played a leading role. Although her mother wanted to move another channel, young Sondra insisted, “Wait, I want to see this!” Transfixed, she watched the remainder of the performance, so affected by its end that she told her mother, “I want to do this!” In a year, she began voice lessons. Radvanovsky told this story last year to Classic Talk, hosted by Bing Yang and Dennis Glauque, in a videotaped interview.

Here is a solo encore from Radvanovsky’s 2011 joint appearance with the very man who inspired her singing career, in the aria Vissi d’arte (“I lived for art”) from the second act of Tosca, in Toronto, which she thanks as “my home town.”  (The aria begins after the announcement at 2.01.49)

The singing in this evening’s Tosca was every bit as enthralling, and the better for being live. Cavaradossi in Brandon Jovanovich’s hands was lithe, flexible, and centered across the tenor range, with fine edges and a mellow core. With Radvanovsky, there was a fine synchrony, both of vocal virtuosity and complementarity, with excellent balance in the center of the hall.

Her singing was nothing short of spectacular, to this listener’s ears, having heard her two months previous as Amelia in Un Ballo in Maschera from a center orchestra seat at the Met. She brings extraordinary power and feeling to the line and the lyrics, which together frequently sends shivers up the spine. With Terfel, it’s a marriage made in heaven. She brings equivalent weight, below and above the tessitura, and a silky radiance that beams through in passages from pp to ff. Equally, she bears a sexy femininity, which suits this complex role to a T, if you will.

But you wouldn’t, with this T, or rather, this S! Terfel’s Scarpia was as personally monstrous and brutally unsexy as could be imagined. When Terfel uttered Scarpia’s line comparing his plot to ensnare Tosca to Iago’s plot to deceive Othello to the point of murdering his beloved Desdemona in the Shakespearean tragedy of jealousy and love, he gave a sense of a cauldron of hatred beneath the policeman’s preoccupation with control. That the plot appeared to work was nauseating, and one had to pause to remember that it was only a play.

The Te Deum that ends Act I is arguably Puccini’s masterpiece of religious representation. The following portion of a delightful letter to his friend, Monsignor Dante de Fiorentino, shows the urgency Puccini attached to get the scene right:

“Go to San Martino. Go to the Bishop, if necessary, and ask him what would be appropriate for the priests as they proceed toward the altar for the celebration of the Te Deum… Find some verses for me, or at least one which will suggest the victory in a prelude before the great Te Deum. Tell the Bishop to invent something for me. If he doesn’t, I’ll write to the Pope and have him thrown out of his job on the grounds of imbecility. . . Get the words for me, or I’ll become a Protestant.”

After Tosca leaves the scene of the Act One to confront her lover, whom Scarpia intends to execute, he gloats over his intentions. As the Te Deum (‘To God”) is sung by a procession of the devout, he proclaims, “Tosca, you make me forget even God,” before singing the prayer with, and above, the chorus.

The musical effect was devastating and magnificent. Terfel soared, blended, rarely disappearing into the prayer but inevitably emerging in volume and range as a frightening portent of what was certain to follow.

Here is Terfel as Scarpia performing the ‘Te Deum’ from Act I of Jonathan Kent’s production of Tosca (2011) in the Royal Opera in the U.K.

In the present performance, the post-Romantic Italian opera movement called Verismo, where Puccini, Mascagni, Leoncavallo, and Giordano, among other composers, writers, and artists, searched for realism in nature, human affairs, and art, was fully realized. Baron Scarpia and Floria Tosca sang unapologetically. The ambiguities and elegance of earlier tradition, with formal beauty and Bel Canto virtuosity, were cast aside. Music and story were impressively integrated, to tremendous effect.

Here, as well, came a revelation of a universal truth, one which we ignore at our peril. When masculine urges and controlling depredations are enabled in the name of religious observance and law enforcement, societies – and especially women – are inevitably imperiled.