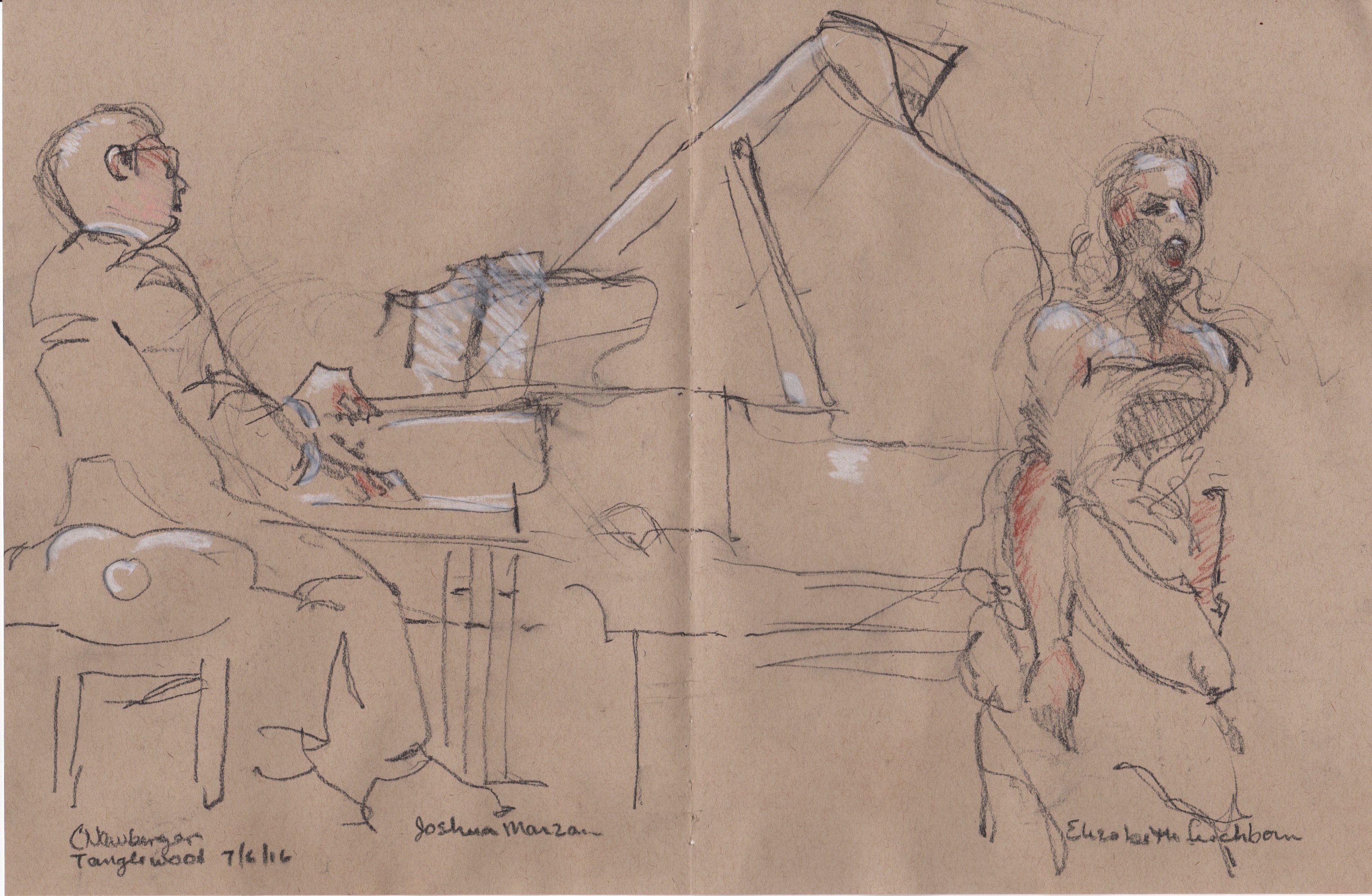 Lenox — Music by female composers embraced an auspicious start to Thursday’s (July 7) Tanglewood Music Center’s vocal fellows’ program. There were many moving interpretations of the predominant theme: the yearnings and constraints of romantic love.

The third stanza of Emile Verhaeren’s poem, C’etait en Juin (“It was in June”), replete with Ravellian washes of white-note harmony by Nadia Boulanger, offered affectingly by baritone, Keith Colclough, with a magnificently controlled crescendo on the fourth line of the verse, brought to mind yet another memorable Harmonic Convergence, with distinctly feminine features, which occurred on Monday, July 4, three days before this concert:

“And caused the sky to become resplendent;

all life entered, through soft breaks,

into our being, in order to expand us.

And there was nothing but cries of invocation,

And wild outbursts and prayers and wishes,

And the need, suddenly, to recreate the gods,

In order to believe.”

Coincidentally named Juno, the 8,000 pound, solar-powered spacecraft, precisely on schedule and on target after five years of travel guided by the scientists of the National Aeronautics and Space Administration (NASA), entered the orbit of the largest planet in our solar system, Jupiter, and documented the harmonic convergence of the orbits of four of the planet’s moons.

These celestial dances of the godly lovers of Zeus, Io, Europa, Ganymede, and Callisto – from closest to furthest away – give curious substance to our earthly notions of the pulls and pushes of romantic love.

Note in this stunning video a time-lapse array of photographs of the moons taken from the spacecraft as it approaches the gaseous heavenly body, and you’ll get a lively sense of what the concept, “harmonic convergence,” is about. (You might want to turn off the sound before watching in order to escape the thrum of phony-baloney space music. Where is Straus’s Also sprach Zarathustra when we need it?)

Returning to Ozawa Hall from this excursion, the highlight of the set of Six Songs by Fanny Mendelssohn Hensel (1805-1847), was the sweetly lyrical Spring, with its own intergalactic metaphor. Here, Joshua Marzan’s piano was both profoundly expressive, and in the short interludes, truly virtuosic. Soprano Elizabeth Fischborn’s plush voice was adorned by subtle and knowing facial expressions, in particular on the dreamy closing verse by poet, Joseph Freiherr von Eichendorff. You can take it, if you will, as a kind of compensating prequel to the bestial bromides in Cole Porter’s Let’s Fall in Love:

The moon and stars say it,

And in dreams the forest rustles it,

And the nightingale warbles it,

From the oeuvre of Nadia Boulanger (1887-1979), came five songs, impressively offered by Bass-baritone, Keith Colclough and pianist, James Maverick. Boulanger, through her pupil, Aaron Copland, bequeathed an important gift to the Tanglewood Music Center. According to Richard Dyer’s program notes on the occasion of the TMC’s 40th Anniversary, 11 years ago:

“When Serge Koussevitzky became the music director of the Boston Symphony Orchestra, he asked his friend, the great musician and teacher Nadia Boulanger, if she could recommend any young American composers to his attention. She spoke to him about her young pupil Aaron Copland. Koussevitzky became the principal patron of Copland’s early years, commissioning and premiering several of his works, and performing most of the rest of them as they were completed. This inaugurated a relationship between Copland and the BSO that continued for the rest of his life. And for the first 25 years of the existence of the Tanglewood Music Center, Copland served as head of the faculty, influencing and inspiring generations of younger composers and other musicians.”

In addition to June, noted above, Doubt, voiced over a throbbing left-hand pedal tone, featured mounting tension, superb diction, and a knowing sense of inner conflict.

Clara Wieck Shumann (1819-1896) was featured in a generous set of eight songs offered by two sopranos, Adriana Velinova, and Sarah Tuttle, and pianist, James Maverick. Tuttle’s superb work, displaying impressive artistic and intellectual growth and depth in the year’s interval since she her last (gorgeous) performance at Ozawa Hall, was displayed as well in the exquisitely phrased evocations of the poetry of Friedrich Ruckert.

In Der Mond kommt still gegangen, Tuttle’s deep and velvety tessitura was impressively displayed in a song of reflection on the loving thoughts that resonate to twinkling stars.

A glorious vocal instrument compliments Adriana Velinova’s stunning stage presence. In Sie liebten sich beide, one beheld the nuances of her attention to every syllable, as well as her ability to structure the dynamics of every phrase to suit its text. For example in the verse, “They parted in the end. And rarely came face with face in dreams; They had vanished long ago from life. And hardly ever knew it for themselves” were expressed with an extraordinarily depth of poetic comprehension, and of the emotional promise, but ultimate emptiness, in romantic loss.

Clark’s Debussy-inspired harmonies suited Daveed Buzaglo’s subtly inflected tenor phrasing of the William Butler Yeats poem, The Shy One, and gave a vivid sense of its compositional structure. He delighted in the descending thirds of the first verse, and the inward-looking, reciprocal upward thirds of the second. The sweet yearnings and metaphors of a boy’s first love were sung with confident personal understanding. (“As shy as a rabbit, Helpful and shy, To an isle in the water, With her I would fly.”) And Blake’s Tiger Tiger, as noted above, was just sublime.

The music of American modernist Ruth Crawford Seeger’s White Moon, quite reminiscent of the legacy of Alexander Scriabin, was given an equally dazzling treatment by the mezzo-soprano, Fleur Barron, and her splendidly attuned and virtuosic partner, Eri Nakamura. The Carl Sandburg verse offered yet another allusive planetary reference to freighted longing, a challenge for both composer and performer. Barron complemented every word with meaning, and she adorned her splendid diction with apposite and supple facial expressions. Her delivery of the final words, White Moon, required her to sing a challenging appoggiatura: the F in the unstated G7 dominant chord over a clarion C triad in the piano. She expressed this startling – and emotionally relevant – minor second (E + F) in perfect tune and balance. Everyone must have enjoyed a sense of solace as Barron gently resolved the dissonance to E.

Soprano Sophia Burgos’s, and mezzo-soprano, Quinn Middleman’s loving treatments of Lily Boulanger’s late-romantic compositions brought out the delicacy and insight of Francis Jammes’s poetry. Although there were some lapses in the diction of the French text, this was more than balanced by their keen sense of the complexities of feminine identity development and romantic fantasy. (“She laughed and shook herself off. . .With that Lanky grace of overly tall girls. She had the look of lavender flowers.” “My heart should have died in the midst of all these things For it was in the midst of orchards white and pink That I had hoped for . . . I don’t know what . . .of you.” “”My soul daydreams dully on your knees. Do not reject it at all. Don’t Awaken it, For fear that in pulling away from you, it should see How weak you are, and how disconcerted, In its arms.)

Burgos has a rich and powerful voice, with a distinctively musky, even exotic, high register, and in softer passages, an ineffable sweetness. Her elegant phrasing and secure sense of pitch mark a special promise.

Here is Ms. Burgos in an extremely demanding – and entertaining – solo performance of Luciano Berio’s Sequenza III for female voice, demonstrating quite astounding acting and technical brilliance as well.

The last song in the program, At the foot of my bed, sung by mezzo-soprano, Quinn Middleman, became luminous. Notwithstanding the dirge-like setting of its beginning, supported by low, ponderous chords, the clouds parted when Middleman sounded Jammes’s verse, “Our Lady, standing before a background of gold, Who makes me think of a thousand catches of the sea, Which are sold on the quais, where not a breath of air stirs the tents which heavily sleep.”

Indeed, we slept well after this enormously satisfying evening, and awakened this morning with happy reverberations of the many feminine glories in art, in the course of one’s lifetime, and in the glittering godly symbols of the universe that embraces all of us.