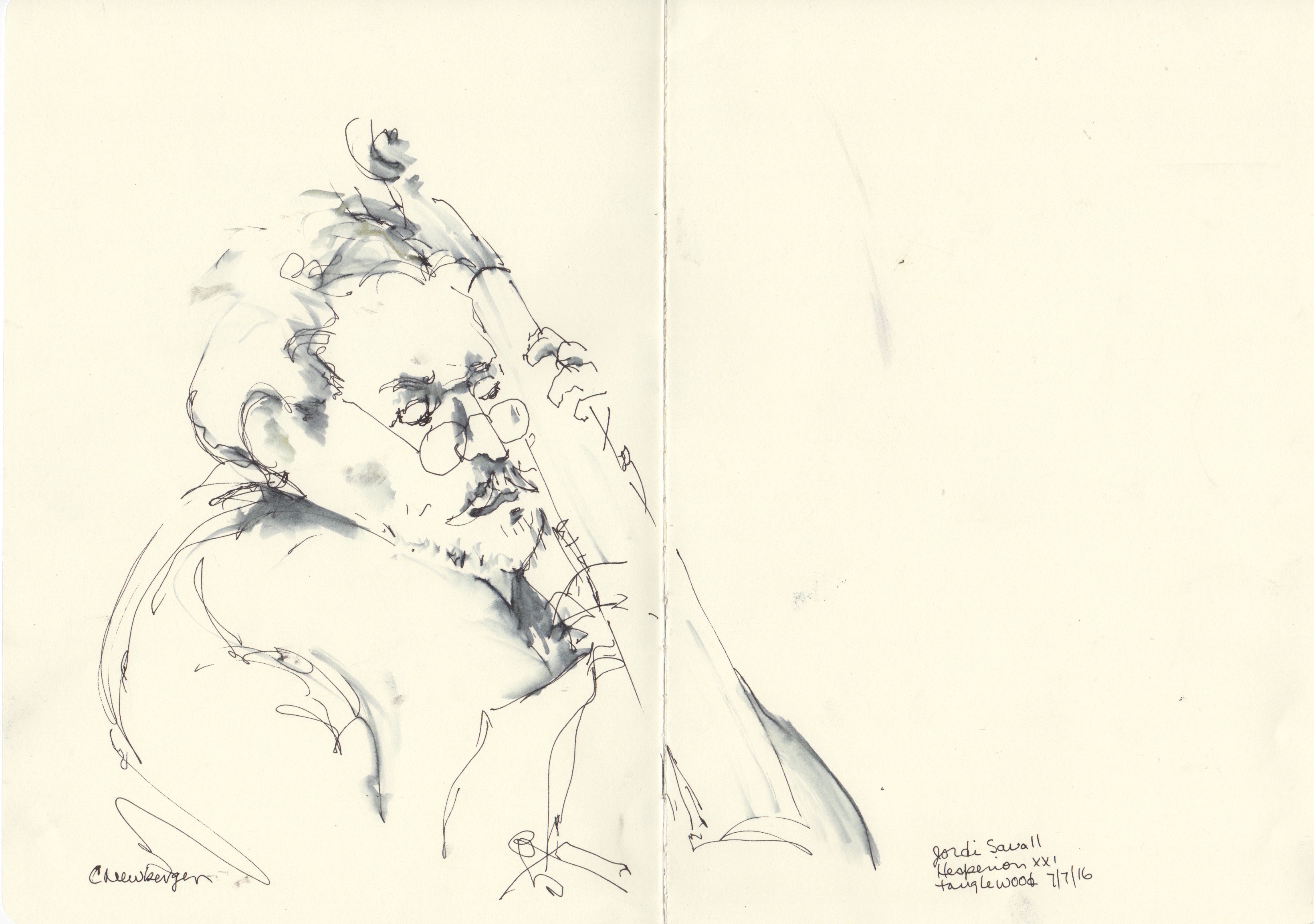 Lenox — In this dazzling display of early-instrumental and vocal virtuosity, Jordi Savall on bass viola da gamba and treble viol, along with colleagues from his Hesperion XXI ensemble and the Tembembe Ensamble Continuo of Mexico took full advantage of architect William Rawn’s great gift to music at Tanglewood, the awesome resonances of Ozawa Hall. These go beyond audible projections of quiet, unamplified strings and drums to a real-life summoning of the essence of instrumental and vocal timbres. The special warm and contemplative silences within pull together the minds and hearts of attentive listeners.

Savall was the central figure, equally as performer, leader, and spiritual inspiration for each musician’s passionate contribution. These were most affectingly expressed in their ensemble improvisations, with cascades of cadenzas, many at the edge of believability, and heartfelt and unexpected bursts of song. Each musician is a master of his instrument and eschews the temptation toward display for its own sake. Here, all the playing was in the service of emotional and intellectual expression, to support the projection of the ensemble’s many coherent rhythmic and harmonic moods. Each piece had a distinctive compositional quality, and the few dull moments derived only from too much repetition of a working groove.

Importantly, the prevailing dynamic was between pianissimo and mezzo-forte. Only rarely, when all the strings were strumming, drums beating, bells ringing, rattles shaking, and everyone singing, did the level rise to forte. With due respect, this was the opposite of a TMC concert with Stravinsky in full cry. The listener was drawn in, rather than thrown back.

Western classical influences were manifest in Savall’s performances on this particular night. He carefully tuned and re-tuned his instrument to fit the contemporary octave, sounded the notes of Dorian and Aeolian modes without special tunings tonal adjustments, and invented skyrocketing runs and arpeggios that would have won a grand prize in an improvising competition that included Bach and Handel.

The musics of the Middle East, and North Africa, and the Roma and Sephardic blue notes of ancient Spain, which one hears typically in Flamenco guitar and vocal stylings, were curiously missing from a performance with such powerful Flamenco rhythmic underpinnings.

Yet the listener is won over by Savall’s deep sensitivity, and evident knowledge of what he is doing. His performances are sui generis and have won worldwide acclaim, with over 170 commercial recordings and hundreds of thousands of YouTube visits.

In this video of a beautiful concert in Istanbul, however, following a brief interview (pardon the French translation) in which he lists his touring schedule and speaks of the distinctive cultural qualities of each locale, there are no few vocal and instrumental resonances to the depth of the tradition. Perhaps it was in respect to (or awe of) YoYo Ma and Pieter Wispelwey, masters of the contemporary version of the bass gamba, the cello, whose solo performances continue to reverberate in the minds of Ozawa Hall aficionados, that Savall adapted his performance on this night to our own, rarified musical landscape.

Then please scan ahead to 12:30 to watch and listen to the huge expressive palette of the magnificent theorbo, a kind of triple guitar with a huge neck to accommodate its bass strings. In this ensemble, the instrument was played masterfully by Xavier Diaz-Latorre, who also doubled on guitar.

Then scan further ahead to 37:00 to watch Jordi Savall’s fabulous improvisation on an anonymous 16th century Canarios. In their informative program notes, Savall and Louise K. Stein describe the often scandalous origins of this dance form:

“The popular canarios dance (perhaps born in the Canary Islands) became a “ground” base for instrumental variations. Endearingly “barbarian,” the joyful canarios was assimilated through Spanish and French adaptation to be transformed into a sophisticated courtly dance. When the canarios were danced onstage, causing a scandal in Madrid, the dancers’ bodies surely pointed to the dance’s exotic origin. The canarios remind us how music traveled, shaped by the vagaries of oral transmission while incorporating Iberian, European, African and indigenous American traditions of improvisation.” (p. 11)

Percussionist David Mayoral offered an impressive array of subtle rhythms on several instruments: with wooden sticks on the rims and heads of several drums, and on tambourines, and castanets. One rarely hears a contemporary Western drummer with such delicacy; arguably, you can’t work with a solo gamba without it!

But he offered more than delicacy when the mood required. When toward the end of the concert, the intensity of the song called for castanets to accent the rhythms, Mayoral appeared to lose himself in the flow, propelling the ensemble into a vivacious group improvisation.

His deep commitment to these particular abiding symbols of the music of Spain recalled the legacy of Ferdinand Joseph LaMothe, a.k.a. Jelly Roll Morton, the self-styled inventor of jazz in New Orleans. Morton insisted that his musicians keep in mind the “Spanish tinge” of their city. If they did so, he believed, and they demonstrated, they would swing better together, and sustain a vital rhythmic reminder of their Creole heritage.

A guitar de son with an especially deep body (some 13 inches) was the main instrument of the Temembe Ensamble Continuo member, Ulises Martinez. Jumping from the role of defining the bass line, he performed a musical tour de force, on of all things, a hand-held group of little bells.

On one of the Folias Antiguas with a 6/8 rhythm, he rang very softly just the fifth beat, and single-handedly syncopated the entire ensemble. When the piece ended, he continued for a few extra measures, as if to drive the point home. The point being, perhaps, that the smallest, best-placed noise can shake up the whole hall.

But when Martinez pulled out his violin and played legato, the mood shifted from rollicking to sultry, and at the very end, when he sang a multi-verse solo in the course of the final encore, he disrupted brilliantly the whole affair with a new twist.

Where in all the previous singing, both individually and ensemble-wide, the tonalities were diatonic, restricted to the familiar notes and intervals of the contemporary octave, Martinez let loose with some 5 urgent non-harmonic blue notes. He signaled, even honored in so doing, the missing madness of the musical stew that gave us this music. A special bravo! goes to this marvelously patient and courageous musician!

Thanks to the resonance of Ozawa Hall, not only could the listener see and feel the gentle striking of the bars of this marrembula vertical marimba, but on several occasions when it was played solo, a hypnotic overtone series extended 3 octaves over the fundamental notes. Temembe Ensamble Continuo member Leopoldo Novoa offered this weird and wonderful auditory bouquet. It served as a ghostly reminder of all the abiding spirits that continue to imbue this tradition with meaning.

There was nothing ungainly about Xavier Diaz-Latorre’s performance on the theorbo, the long, multi-stringed lute-like instrument. He drew from it sounds reminiscent of a pizzicato contrabass; sweet and supportive single-note mid-range lines that added a tenor voice to the unfolding matrix of ensemble improvisations; and scampering high-note volleys.

Perhaps not surprisingly, when he picked up his guitar to strum extravagant poly-rhythms with his fingernails, a new layer of excited elevation was added. Every time he did this during the group’s choral singing, it brought down the house.

When Enrique Barano of the Tembembe Ensamble Continuo sang with quiet eloquence, it brought tears to one’s eyes. So many references to his heart (corazon) were accompanied by his pointing to his chest that one longed for a simultaneous translation of the entire text.

Notwithstanding this absence, Barano’s hoarse, consistent, manly tessitura was totally convincing, bringing to mind the heartfelt incantations of Flamenco. His guitar playing was acutely attentive to his colleagues’ contributions to the ensemble. Ever observing, he served as a fine counterweight to Jordi Savall on his right.

There was no tilting at windmills in this thrilling performance. It was a glorious and unforgettable evening of music for the mind and the heart.