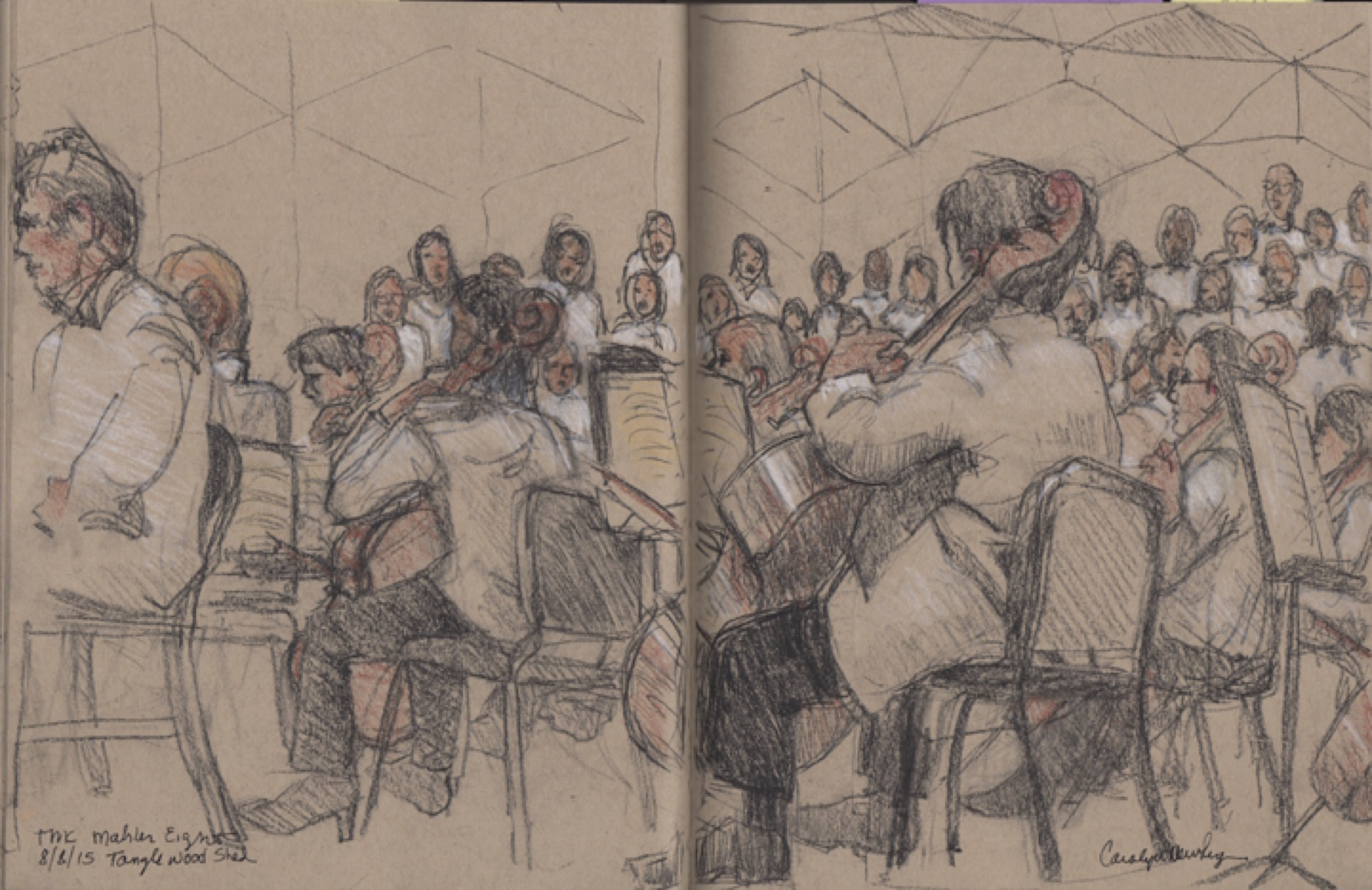 Sufficiently to summarize the glorious music performed in this celebratory summer by the Fellows of the Tanglewood Music Center would be an impossible task. Arguably, for the Fellows themselves, with multiple assignments including chamber and orchestral performances, challenging solo platforms, a bracing dose of new music, it is a summer of contemplating sublime accomplishment, the joy of performing with world-class contemporaries, Tanglewood faculty and visiting artists, and the challenge of meeting near-impossible expectations.

In her essay, “75 Years of a Community of Music,” published in the “Tanglewood Music Center 75,” Ellen Highstein, its director since 1998, addressed its values:

“While adapting various artistic and logistical aspects of the TMC for the requirements and possibilities of the present, we continue to adhere to the principles that formed its foundation, and that have been so very successful. The interactions between the TMC and the BSO have never been sstronger, or healthier. All TMC Fellows have the opportunity, in various ways, to be onstage with the Boston Symphony: perhaps playing in the orchestra, or observing rehearsals from within the section. BSO’ players serve as liaisons to their instrumental counterparts in the TMC, forming strong mentorship relationships through the summer. World-renowned BSO guest artists join in working with the Fellows as well, in both formal and informal settings, and a distinguished faculty serves the non-orchestral discliplines, including the vocal and composition programs.

“And the primacy of composers and new music continues to inform TMC activity. Celebrating this, for the summer of 2015 some thirty-four works have been commissioned from a wide range of composers (and one choreographer) whose relationships to Tanglewood, as students, faculty, or sometimes both, extends from 1945 to 2014. And our highlighting of contemporary works is by no means limited to these. Every TMC program will feature new music, including the works of the 2015 Composition Fellows alongside their senior colleagues.

“Koussevitzky’s vision of the TMC sprang from a deeply held conviction — that music is important, truly important, and that recognizing its profound power to both elevate the soul and deepen understanding requires a place where this can be explored fully, as free of limitations as possible. In his own words, from 1947: ‘Have we the courage to break away from the banality of mere ‘enjoyment’ to the realm of pure joy to which music belongs?’ ”

In this spirit, we acknowledge with gratitude the elevation, understanding, and joy that the following, selected young artists have brought to us this summer, illustrated during their performances by co-reviewer/artist, Carolyn Newberger. 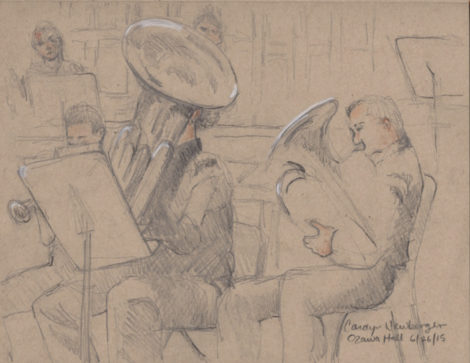 Tuba Colby Parker, half-hidden behind his instrument here, gave his all in the brass and percussion recital on June 26, with a succession of gorgeous phrases and heavy accents in the lowest depths of the instrument. (Prior to listening to Colby’s performance on the modern works, your tuba-playing reviewer didn’t think that what he accomplished was physically possible. Huge diaphragmatic force and relaxed embouchure typically lead to blubbering.) Colby’s unerring musicality was exposed in the second movement of the Mahler 8th Symphony, under Andris Nelson’s baton, when he responded to one of the conductor’s three-dimensional cues for a solo crescendo and diminuendo exposed high note— as if he were pulling a rabbit from a hat, lifting it high and lowering it down — with sweet, strong, sound and perfect balance with the orchestra. After the splendid entry of the boy choir later in the movement, another, now velvety solo, adorned a long, arching phrase with surpassing delicacy and tenderness, perfectly apposite to the reverential mood. 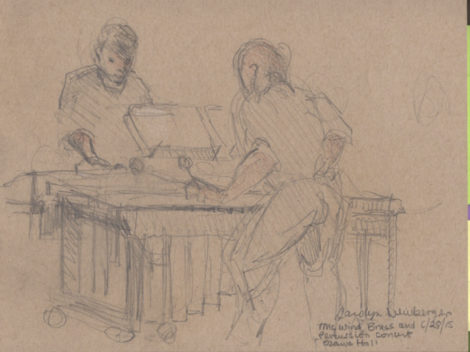 Two fine percussionists doubled on xylophone and marimba in the same concert. 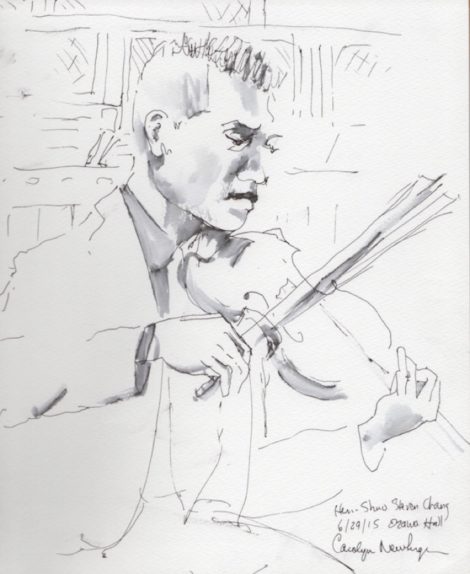 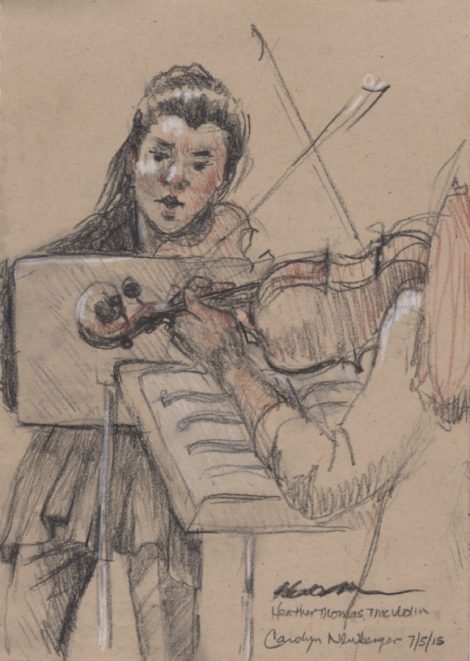 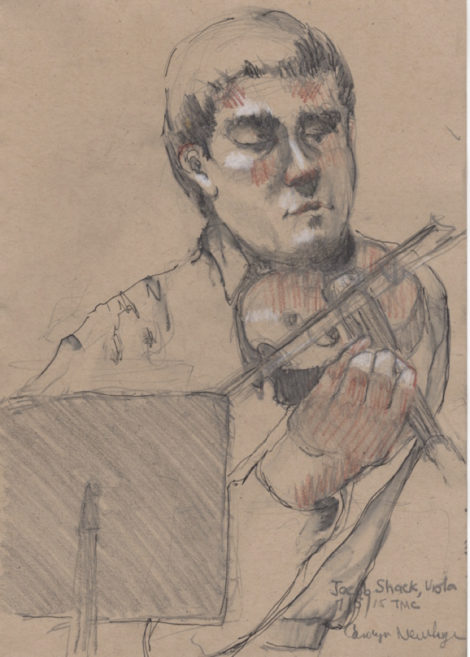 Jacob Shack brought a warmth and depth reminiscent of Isaac Stern to Ozawa Hall on July 5. 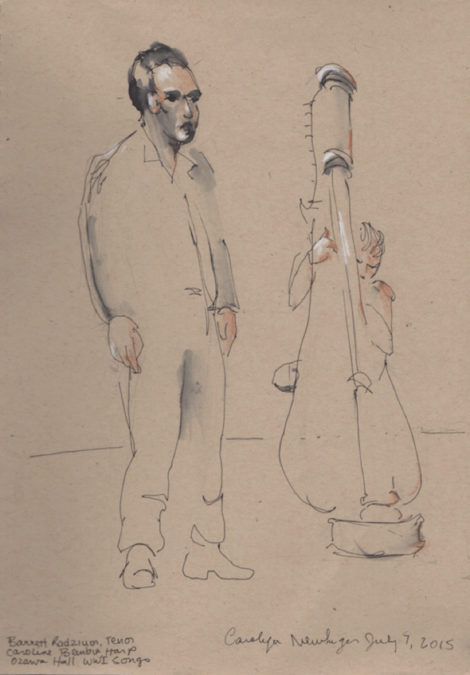 Bassert Radzium and Carolyn Bembia summoned movingly the heights, hopes, and depths of songs of war in Ozawa Hall on July 7. Radzium was elegant and profound, with poise and maturity that betrayed his youth, while Bembia’s harp was distinguished by fluid phrasing, marvelous dynamics, and richly textured voicings. 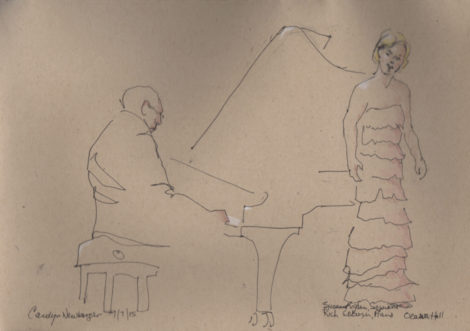 Passion, grace, and impeccably articulated phrasing distinguished Suzanne Rigden’s performance during an evening of songs from the World War I era. Her becoming style was matched perfectly to the subtle and nuanced playing of her fellow Canadian, pianist, Rich Coburn. 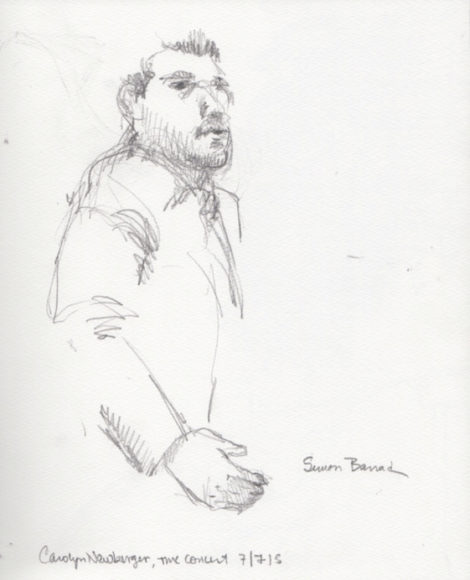 Baritone Simon Barad’s heartfelt , affecting presentations of songs of wartime were emotional high points of the WWI song recital. A gorgeous voice was matched with a profound depth of feeling in every syllable and phrase. 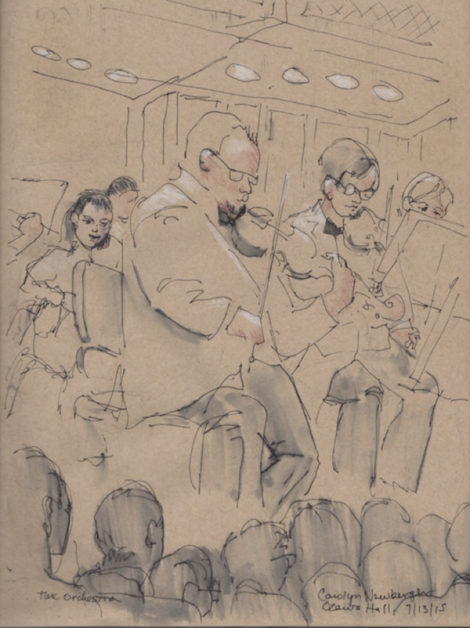 By the end of their July 13, 2015, concert, the TMC Orchestra was coming together as a glorious ensemble, with impressively mature conducting by fellow Ruth Reinhardt, for whom the Orchestra played their hearts out, and whose secure stickwork seemed a match to faculty members Stefan Asbury’s and Ludovic Morlot’s. Women conductors are few and far between on the podiums of major orchestra, and Reinhardt’s is a career to watch.

The strings, woodwinds, and brass were especially impressive. 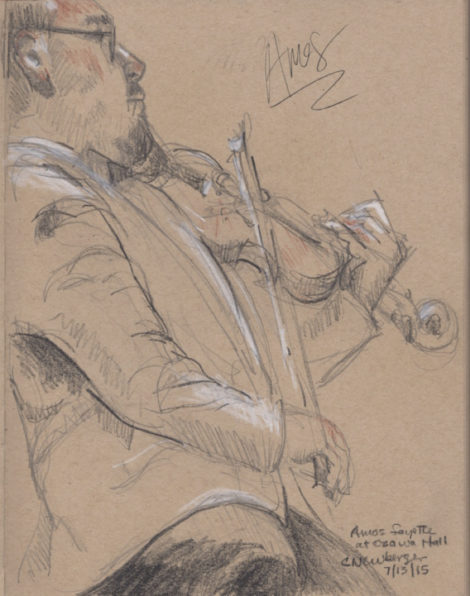 The young virtuoso concertmaster, Amos Fayette, soared gloriously and sang touchingly in the TMC Orchestra’s July 13 concert, with ease, dynamic nuances, and subtleties of phrasing that seemed remarkably similar to those of his teacher, former BSO concertmaster, Joseph Silverstein. 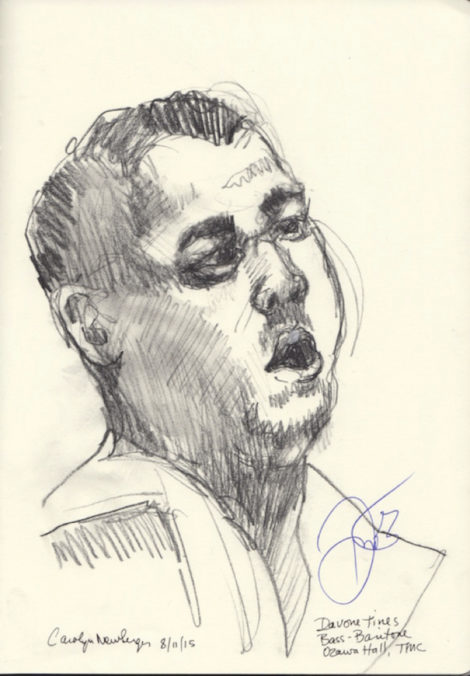 Mahler’s Eighth Symphony (“of a Thousand”) was, for this listener, a magnificent valedictory effort by the TMC Orchestra. Under the baton of Andris Nelsons, interweaving perfectly voiced solos and massed sections with splendid soloists, the TMC Festival Chorus, and “a choir of blessed children.” Everyone, not least the Fellows themselves, seemed deeply moved by the experience. 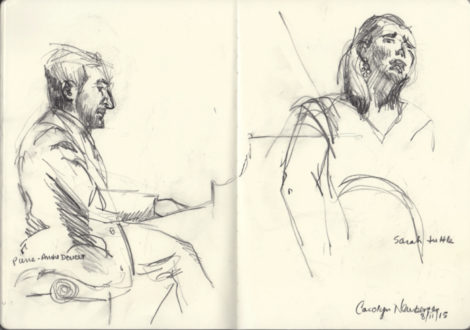 The final TMC vocal concert, on August 11, included lieder by Ibert, Messiaen, and contemporary works by William Bolcom, Lucas Foss, Peter Lieberson, and world premieres in honor of the TMC’s 75th Anniversary by Fred Lerdahl and Einojuhani Rautavaara. The vocal cast included the elegant, masculine bass-baritone, Davon Tines; the exquisite, wide-ranging soprano of Sarah Tuttle, with a remarkably sensitive collaborator, Andre Doucet, calibrating every dynamic nuance; and the romantic duo of Barrett Radziun, a brilliant comic actor as well as gifted, silvery tenor, who, with Kristin Gornstein, a delightful, soap-opera tragedienne and marvelously flexible mezzo-soprano, tested the limits of a fraught love affair. 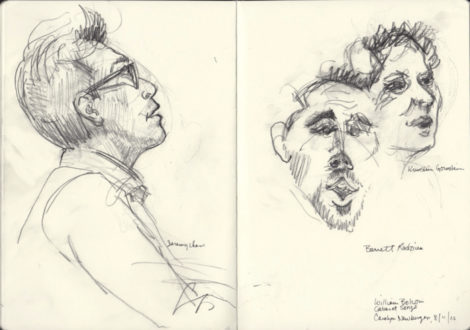 In the arc of the short TMC season, that each Fellow described as going by in a flash, there was palpable evidence of both mutual support and artistic growth. Their professionalism and dedication to the highest values of musical expression was deeply satisfying to share from a seat in the audience. The ample crowds responded in kind to this quite sublime gift.