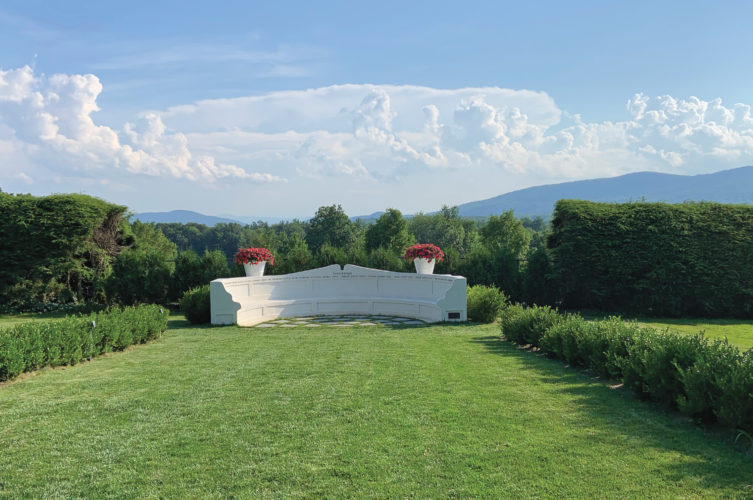 It’s official: Lenox has been designated a Massachusetts Cultural District, the fifth town in this culturally rich region to win the coveted designation and qualify for state funding for special cultural initiatives. One of the criteria for selection is that a Cultural District must be compact enough to walk in and yet cut a high profile in terms of artistic and historical interest. If you set out on foot in the downtown area, you’ll be passing — and perhaps entering — the stylish shops, galleries, and eateries that beckon from every street and side street. You can walk to Shakespeare & Company’s campus and Ventfort Hall on nearby Kemble Street, and Tanglewood itself is just a mile and a half away.

When did Lenox become fashionable? In 1821, to be precise, when a son of the Sedgwick family moved here from neighboring Stockbridge. He was soon joined by his sister, best-selling novelist Catharine Sedgwick, who was the region’s first literary luminary. Some of their friends from Boston started building grand “cottages” in the neighborhood, and one rented a cottage of the humble kind to Nathaniel Hawthorne and his family in 1850. Although the Hawthornes only stayed for a year and a half, the author of The Scarlet Letter wrote Tanglewood Tales on the grounds of what would later become the summer home of the Boston Symphony; the name “Tanglewood” is Hawthorne’s own invention.

In addition to the Bostonians, wealthy New Yorkers like Edith Wharton built some 75 impressive country houses in Lenox and Stockbridge in the latter 19th and early 20th century, and some of them, including Wharton’s (The Mount) are open to the public. Advance reservations online are now required for tours of the Main House. You do not need a reservation to walk the grounds, visit the Terrace Café or bookstore. The grounds are open daily; the other areas are closed Tuesdays.

Ventfort Hall, built for J.P. Morgan’s sister in 1893, even has a museum dedicated to the Gilded Age in several of its 50 rooms. Ventford Hall is now open daily except Wednesday for self-guided tours by prepaid reservation only at 11 a.m., 12:30 p.m. and 2 p.m. But, feel free to come to “Drop-in Yoga” on the lawn every Saturday at 8 a.m. Online tours are also available. And Tuesday Talks are still happening, with limited in-person and unlimited online seating. Canyon Ranch Spa, now re-opened (check their web site for travel restrictions and special August through October experiences) occupies another “cottage” (with extensive add-ons for recreation and wellness) as do the luxurious hotel/restaurant/spa/condo complexes at Blantyre and the former Cranwell. Blantyre, a member of the Relais & Chateaux network, has re-opened after an $80-million renovation and now boasts a new Café Bouloud restaurant. And, after a $130-million renovation, the former Cranwell has emerged as an all-inclusive wellness retreat called Miraval Berkshires and the more à la carte retreat called Wyndhurst Manor & Club. All these special experiences are respecting COVID safety procedures.

The Tanglewood Music Center, summer home of the Boston Symphony Orchestra, is, in ordinary times, the jewel in the Lenox crown — the place for premier classical music performances as well as concerts by big names in rock, folk, and pop. The setting is as spectacular as the music, and a picnic on the lawn at Tanglewood has been a tradition for many visitors over the years. Instead, this summer, the BSO is offering a full schedule of online concerts. The Tanglewood grounds are available for visits Wednesday, Saturday and Sunday by pre-registration. After a successful inaugural year in 2019, the Tanglewood Learning Institute also offers this summer a full schedule of lectures and performances online.

With live performances at Shakespeare & Company cancelled for this season, the company has teamed up with the Berkshire International Film Festival to offer drive-in movies on the Shake & Co campus.

There’s great shopping in Lenox. Most stores are open for mostly normal business hours. Check their individual web sites. Catwalk, one of the Berkshire Humane Society’s two resale outlets (the other’s in Great Barrington), opened last year on Church Street, and the popular upscale clothing retailer The Casablanca Group has three stores in Lenox: Casablanca on Church Street and Shooz on Housatonic Street are open; Swtrz is temporarily closed, but its merchandise is for sale in a tent behind Casablanca. Steilmann, on Walker Street, carries women’s European fashions, and trendy CERI Boutique has opened a women’s clothing store on Housatonic Street. Purple Plume, MacKimmie Co., Glad Rags and design menagerie are other well-known shops. Lenox Print & Mercantile, also on Housatonic, offers vintage treasures as well as crafts by over 60 local artisans. An American Craftsman on Walker Street features the work of many artisans working in wood, clay, fiber, metal, glass, leather, and mixed media. The Bookstore & Get Lit Wine Bar is open, although not able this year to bring the town together for readings. And on Route 7, just north of town, is the Arcadian Shop, the Berkshires’ leading outdoor sports retailer, although there are no bike rentals this summer.

Lenox eats well.  Alta and  Bistro Zinc are two good reasons. Nudel has been turned over for the summer to Cap’n Mac, and  Firefly is currently closed.  Haven Café and Bakery on Franklin Street at the foot of downtown has excellent light fare for breakfast, lunch, and weekend brunch. One treat for the palate is right off Route 7: superb chocolates and great coffee and cocoa await you at cozy Chocolate  Springs Café.  Saveur  magazine recognized chocolatier Josh Needleman as one of the top 10 in the United States. Lenox is still gilded, but in a good way. Check web sites for hours of operation for all these restaurants.