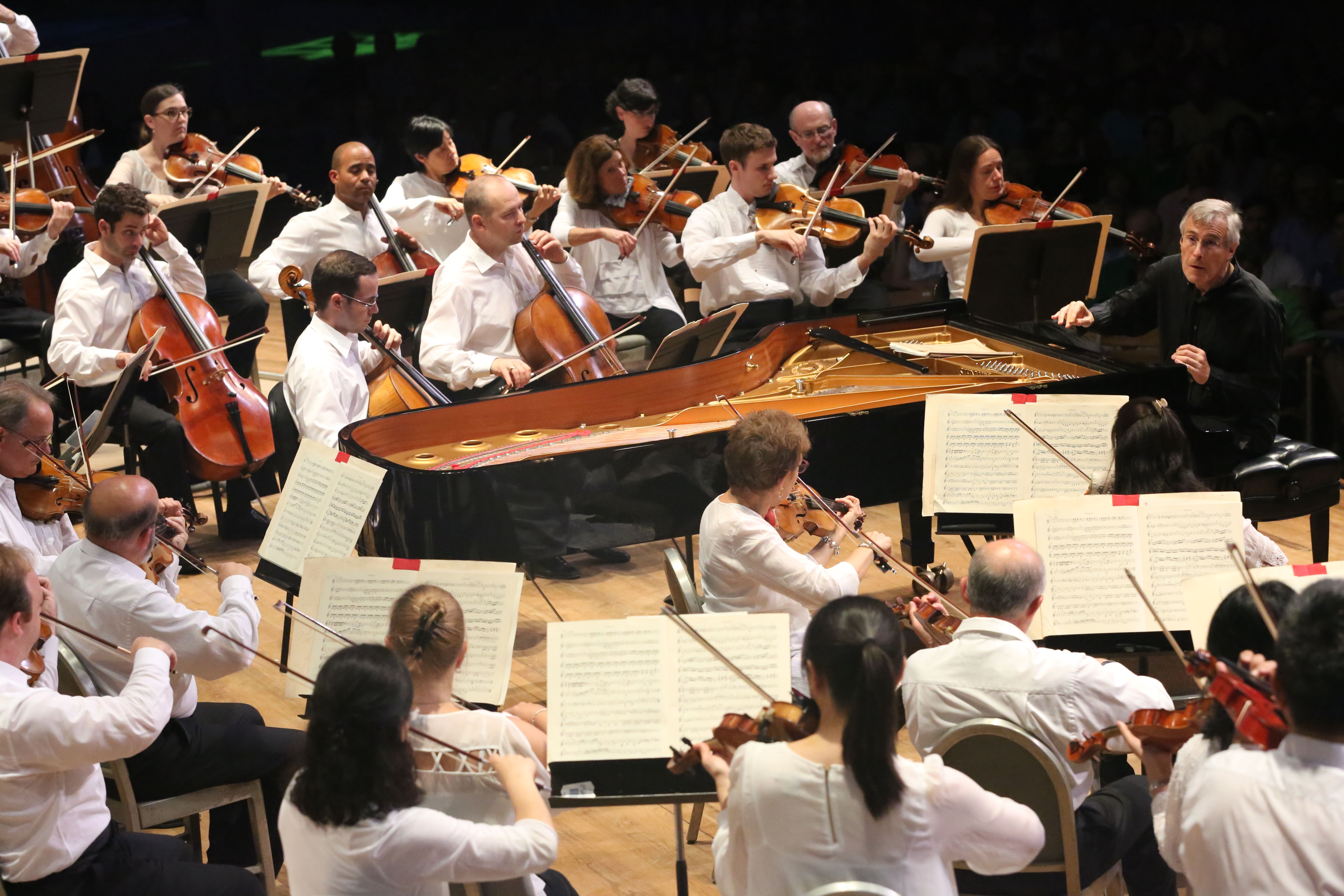 Lenox — On Thursday, July 16, Christian Zacharias kicked off a Mozart/Schumann marathon in Ozawa Hall that continued in the Shed through Sunday, July 19. Actually, it wasn’t exactly a marathon, but the BSO did devote four days to the works of Mozart and Schumann. On the last day, Sir Neville Marriner conducted two Mozart symphonies along with Robert Schumann’s only completed piano concerto. I’ll cover just a few highlights from this four-day program.

Friday’s program started with Schumann’s Overture from music for Byron’s “Manfred,” Opus 115. Michael Steinberg calls Byron’s poem “a noble orgy of guilt and remorse,” but it’s not easy to convey (or hear) these emotions in a purely instrumental overture. Think of this piece as a teaser to the larger work. Second on the program was Mozart’s Violin Concerto No. 5 in A, K.219. Baiba Skride was the soloist for both this piece and the next, Mozart’s Rondo in C for violin and orchestra, K.373. Ms. Skride’s playing was superb, which should come as no surprise to anyone, as she collaborates frequently with Mr. Zacharias.

The Friday program ended with Schumann’s Symphony No. 2 in C, Opus 61. If this piece reflects Schumann’s varying states of mental health (which was often extremely poor), then the last movement might be considered uplifting. Is it incoherent, as some have suggested? Perhaps, but only if one attempts to superimpose onto the music an unnatural structure that the composer never intended.

If you ever want to witness a miracle, just watch Christian Zacharias perform a Mozart piano concerto in the dual role of conductor-pianist. You really must see this to believe it, because such performances are exceedingly rare. Few of us, in fact, are able to conceive of this level of musicianship, partly because few conductors or pianists are able to demonstrate it. But Zacharias, as it turns out, routinely pulls it off with aplomb. In Saturday’s Mozart program, it was Mozart’s Piano Concerto No. 25 in C, K.503, but this man’s piano repertoire includes a great number of other Mozart pieces.

I wish more musicians would conduct from their own instruments when they have the technical chops to make it work (which many conductors do, including James Levine and Sir Neville Marriner, who’s been playing and conducting this way — in his case with violin — for more than half a century). This approach is desirable for a few different reasons. First of all, it helps an audience understand what a conductor actually does to guide and support the musicians in an orchestra. The usual gestures are stripped down to a bare minimum; none are gratuitous, and none are wasted. Secondly, and perhaps most important, there’s none of the usual give and take that we often see between soloists and conductors, who in many cases seem ever on the brink of drifting apart during a performance. When soloist and conductor are one and the same, there results a single-mindedness of both purpose and timing, and the entire ensemble benefits (not to mention the audience).

Second on Saturday’s program was Mozart’s “Ch’io mi scordi di te? … Non temer, amato bene”, K. 505. Unfortunately, no one heard more than a few notes of soloist Sarah Connolly’s vocal performance because she was almost entirely drowned out by fireworks launched during her performance from a nearby location on Undermountain Road. (BSO Managing Director Mark Volpe, was, true to form, annoyed but not exactly incensed. I was livid.) Fortunately, the fireworks ended before Ms. Connolly sang Mozart’s “Deh per questo istante solo” (Sesto) from Act II of “La clemenza di Tito,” K.621. Her singing was accurate and gorgeous. The crowd let her know how much they loved it.

When all is in balance, a conductor makes the orchestra look good, the orchestra makes the conductor look good, and together they make the composer look good. Even when this balance is effectively achieved, it can be difficult to recognize. But, surely, such equilibrium has never been more obvious than it was in Saturday’s final piece, Mozart’s Symphony No. 38 in D, K.504, “Prague.”

Does Mozart actually need anyone to make him look good? Yes, and here’s why: Mozart’s music is often deceptively simple, and orchestras like the BSO tend to make it sound easy. But anyone who has ever performed these pieces will tell you they are anything but easy.

Of course, Christian Zacharias was well prepared. This would have been obvious to anyone who happened to notice the conductor hardly glancing at his score. Also obvious was the BSO players’ complete trust in Zacharias. The result was something akin to magic, and the crowd sensed it. It was truly glorious.

On the radio show, “Performance Today,” Fred Child occasionally waxes eloquent about Christian Zacharias, and I’m usually justified in taking him seriously. Still, I’ve occasionally wondered whether all the enthusiastic reports about Mr. Zacharias could possibly be true. They’re true.

And now, I’m laughing aloud at the comparison I’m about to make: When orchestra and conductor are of one mind (and performing at the highest level of technical excellence), they’re likely to end up sounding a bit like . . . yes, Sir Neville Marriner’s orchestra, the Academy of St Martin in the Fields. How appropriate, then, that Sir Neville Marriner conducted the BSO’s final program of Mozart and Schumann, Mozart’s Symphony No. 35, “Haffner”; Schumann’s Piano Concerto (Paul Lewis, piano); and Mozart’s Symphony No. 36, “Linz.”

Clearly, many in the audience had come to Tanglewood to experience the legendary alchemy of Sir Neville’s conducting technique. No one was disappointed, judging by the uproar that ensued at the close of the concert. The crowd went nuts (and so did I).

Paul Lewis was also enthusiastically received, and for good reason: he had the privilege of playing an uncommonly beautiful piece of music, Schumann’s only piano concerto, and his reverent performance revealed everything that matters about the piece and its emotional underpinnings (which are perfectly tragic). Interestingly, Mr. Lewis’s playing — he’s not a flamboyant performer — called attention more to Schumann than to himself. Thus, he served Schumann very well indeed.

Both conductors of these programs are well known for encouraging orchestras to listen and play in the manner of small chamber ensembles. BSO oboist Mark McEwen calls it “hypervigilance” when players attain such a heightened state of musical awareness. No matter what you call it, the resulting music can often be sublime.