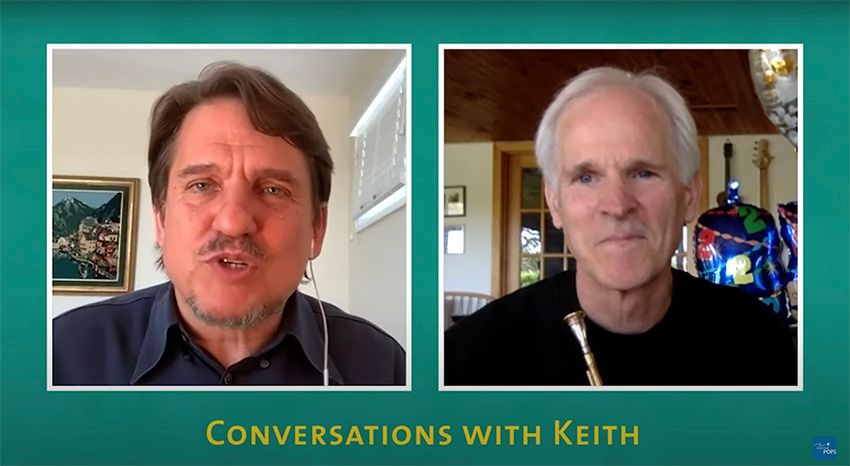 Boston — It takes a lot more than musicianship to be music director of the Boston Pops Orchestra. If you want that job, you will need to bring to the table a number of skills that aren’t taught in conservatory — such as how to play the air guitar or pose onstage like a member of Aerosmith. But the skill you need in spades is your mastery over ceremonies: You must know what to play and when, and you must be a good emcee. That means you know how to interview people in a professional and engaging manner, as Keith Lockhart has done in some recent videos he’s posted in a series called Conversations with Keith. It’s just one of many pandemic dividends from the BSO that we would be ungrateful to call by any other name.

In the first three episodes, Maestro Lockhart interviews Larry Wolfe, principal bass of the Boston Pops; the Broadway composer/lyricist team of Stephen Flaherty and Lynn Ahrens; orchestral arranger David Chase; and, in episode 4, Boston Pops’ principal horn Gus Sebring. These are full-length, in-depth interviews that focus on the nuts and bolts of music making. They allow one to be a fly on the wall while incredibly talented people talk shop about their work. The conversations are fascinating to the layperson, and priceless to professionals and serious music students.

When he’s onstage with the Boston Pops Orchestra, Gus Sebring’s white head is just barely visible to the audience. That’s usually all we see of him. Yet he’s as well-known to the public as any member of the orchestra. That’s partly because he’s been in the band for almost 40 years. But it’s also because he gets to play some of the coolest solo passages in the Pops’ repertoire (which happens to include a few of Gus’ own arrangements and compositions). When the composer is John Williams, though, that’s when Mr. Sebring is really in his glory, because he got to play on some of the original film-scoring dates with Williams (e.g., the solo horn on the score for “Saving Private Ryan”).

Gus Sebring teaches at the New England Conservatory of Music, the Tanglewood Music Center, and the Berklee College of Music (not to mention the free lessons he gives at BSO Homeschool).

Keith Lockhart has proved to be not only a great conductor, but a world-class master of ceremonies in his 25 years with the Boston Pops Orchestra. Now we find he’s got the chops to be a talk show host.