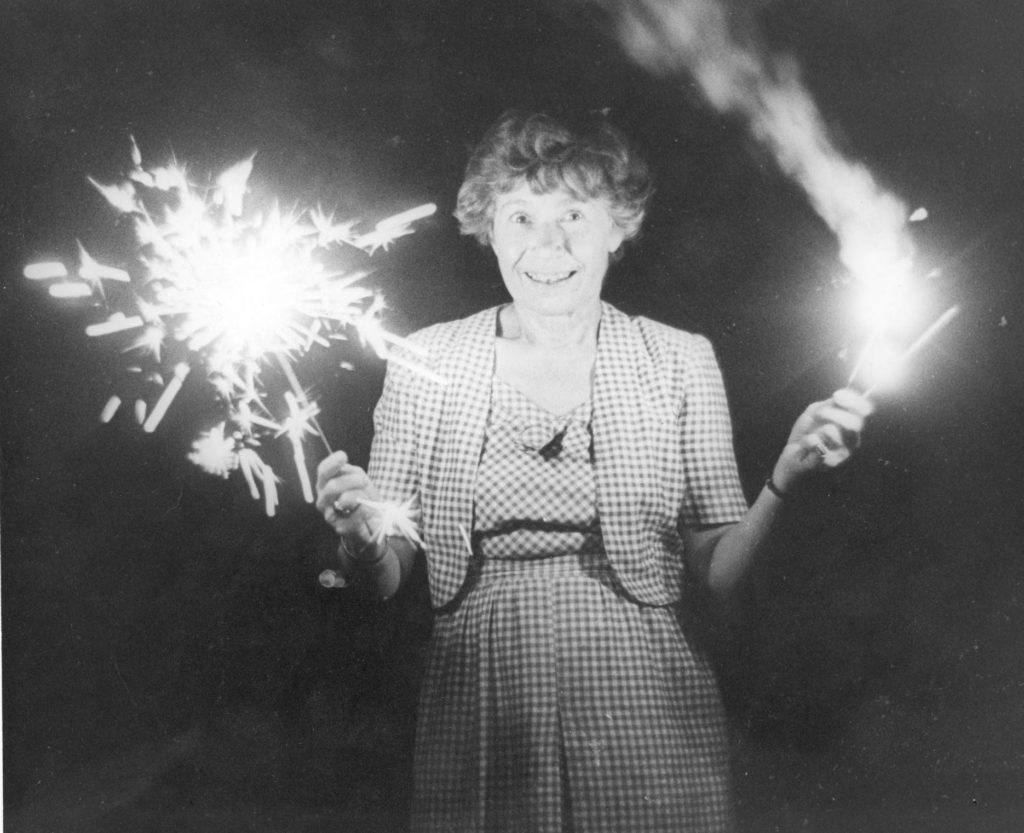 Great Barrington — The dead letter office. No, it’s not a cliche out of a film noir classic or an Ellery Queen murder mystery. Dead letter offices exist, and for good reason.

Early this week, The Edge’s very upbeat letter carrier, Laurene Stang—better known as the “the singing mail woman”—came by the office to deliver our mail. After setting it on the table, she held aloft an envelope and asked us if there was anyone in the building named Marie Tassone.

The name rang a bell. I scratched my head and recalled that, at my previous publication, I had written a story about a Great Barrington photographer by that very name. But she died decades ago and I could not understand why there would be a piece of mail addressed to her and slated for delivery more than 40 years after her death. 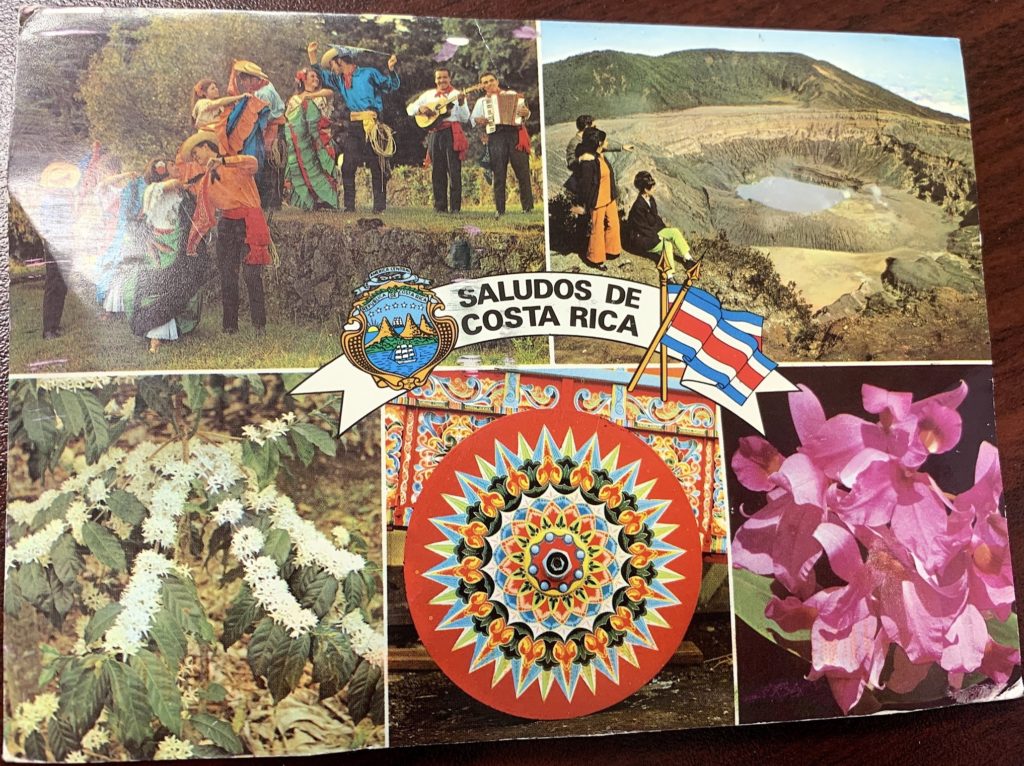 The front of a postcard sent from Costa Rica to Marie Tassone in 1976. Photo: Terry Cowgill

As Laurene handed the envelope to me, I could see its contents through the cellophane window. The postcard was sent from Costa Rica, though its sender was almost impossible to determine. The note on its back was signed using only one illegible given name and, of course, postcards do not contain return addresses. Indeed, it occurred to me that there are probably a lot of postcards at the dead letter office for that very reason.

The front contained four colorful images of native flora and fauna; an outdoor performance of native music and dance; and the active Poás Volcano, which contains the second largest volcanic crater in the world. 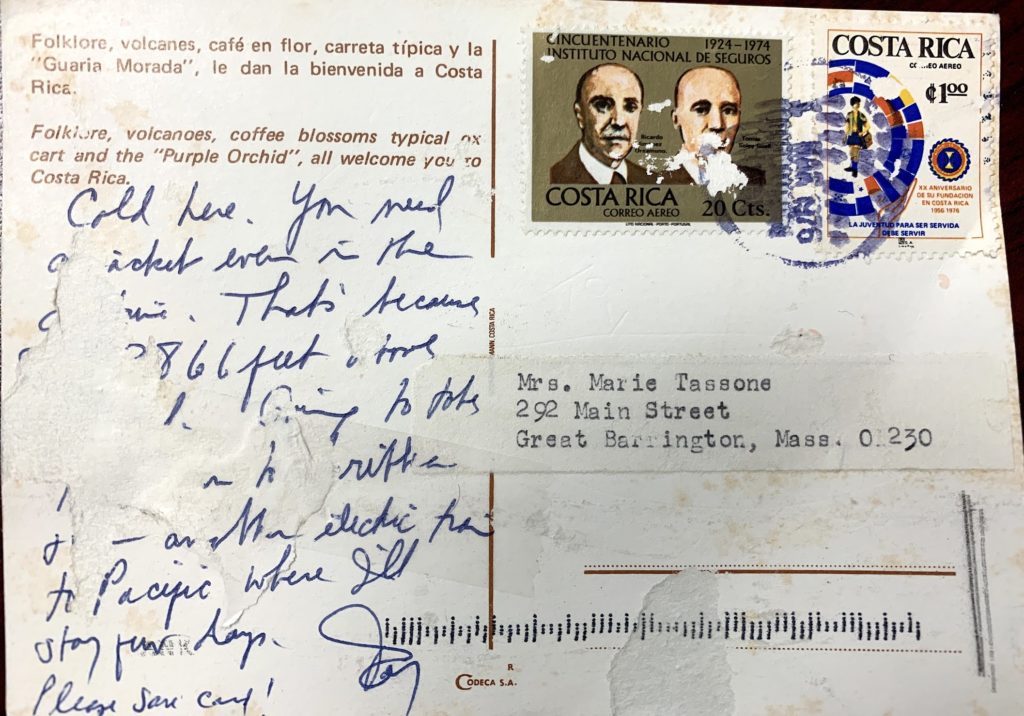 The postcard from an unknown sender bore a postmark from 1976. Photo: Terry Cowgill

Then I looked at the postmark: It was stamped with the year 1976, though the month and date were difficult to make out. I asked Laurene where it came from. She wasn’t sure because she was simply asked to deliver the postcard to its rightful recipient. We both shared a laugh about the legend of the letter that fell behind the sorting machine and was discovered decades later when the room was being remodeled.

Tassone had an interesting and colorful life, culminating in her designation by the board of selectmen as Great Barrington’s “photographer laureate” in 1989, a year before her death at age 86.

She and her husband, Domenic, a portrait photographer with an affinity for dog shows, set up a studio on Railroad Street shortly after moving to town in 1936. Domenic died in 1943, but Marie continued to practice her profession, photographing weddings and celebrities such as Eleanor Roosevelt and Dana Andrews.

She even modeled for acclaimed artist Norman Rockwell for one of his paintings, according to historian Bernard Drew, author of “Great Barrington: Great Town, Great History.” And she was something of a mentor to a popular Great Barrington photographer, the late Don Victor, who himself proudly wore the label of “community photographer.” 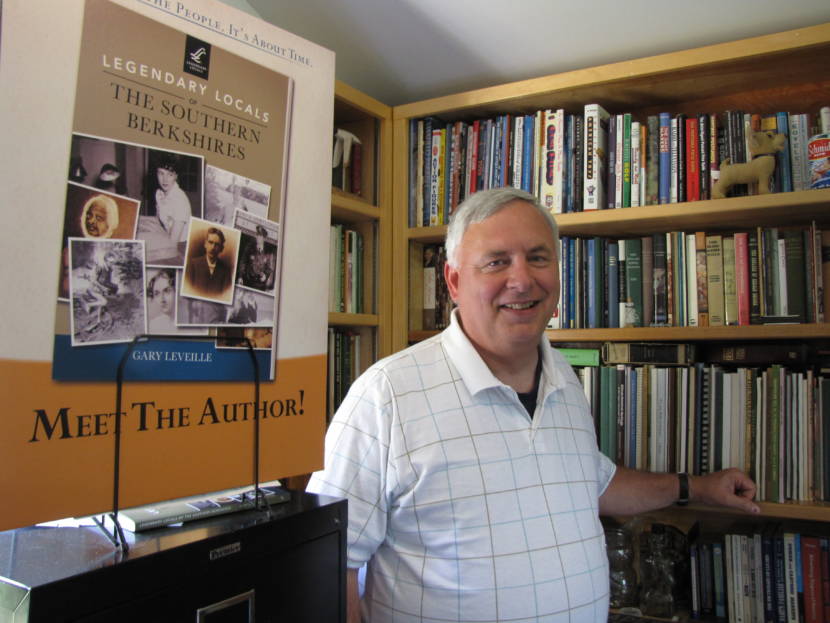 “After her death, the entire contents of her studio, including tens of thousands of photos and negatives, were willed to the Great Barrington Historical Society,” local historian Gary Leveille, who is also the archivist for the historical society, told The Edge. Leveille, an Edge contributor, wrote a brief profile of Tassone in his popular book, “Legendary Locals of the Southern Berkshires.”

In her later years, however, Tassone’s mental acuity declined, but not to the point that her creativity suffered. She continued to find work, photographing weddings and events with great skill, but sometimes she lost track of the prints and negatives, resulting in newly married couples who had no photographs of their nuptials.

The problem confronting the historical society was that most of her work was not labeled. “We believe Marie developed dementia because the photos were in a jumbled, unorganized mess,” Leveille said. “As the volunteer archivist, I have been laboring for over 20 years to get her photos organized and cataloged.”

One of the top priorities of Leveille and fellow volunteer Marilyn Bisiewicz was sorting out the wedding photos and, if possible, returning them to their rightful owners. There were, after all, lots of Tassone’s clients who complained that they had never received their wedding photos.

And there were some successes in the sorting process, most of which took place in the attic of the Ramsdell Library in Housatonic, where the historical society stores and maintains its archives. 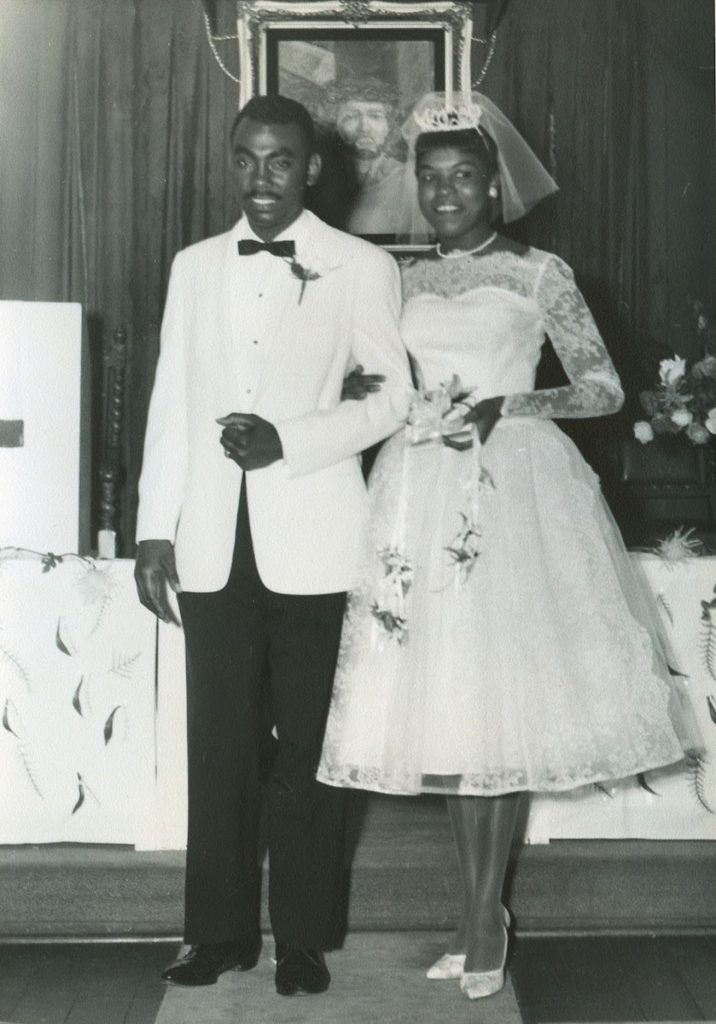 An undated wedding photo of an unidentified couple taken by Marie Tassone.

One person who got lucky was Art Davis of Haddad Auto. Davis was chatting with Leveille after he heard the historical society had inherited the Tassone photos and told Leveille he never received his wedding photos from Tassone. Bisiewicz went through the boxes of wedding prints and managed to find the Davises’ 1970s-era photos. But there are so many other materials that have yet to be identified.

In addition to weddings (six boxes), and assorted portraits, in the Ramsdell attic, there are photos of building interiors, special events, the kennel club, the military, famous people and the Great Barrington Fair. There was also a box marked “African American.”

There are few people still around in town who knew Tassone. Artist and sculptor Morgan Bulkeley is one. He met Tassone briefly when he was looking for studio space on Main Street. Bulkeley eventually settled in the Ware Block at 292 Main St., above what used to be Tune Street and is now the Jane Iredale retail outlet.

“She was in the space below me. I knocked on her door and she was very pleasant,” Bulkeley said. “I think this was in the mid-‘80s.”

“I interacted with her many times, especially when she took photos of various Newsboy Statue celebrations,” said Leveille, who wrote a book, “The Mystery & History of the GB Newsboy Statue,” about the famous monument on Maple Avenue. “I also visited her unorganized studio several times. As she got older, it was kind of sad.”

In addition to weddings, Tassone took countless photographs of everyday life in and around the Berkshires. She took many photos of the Barrington Fair, and numerous other events. Many of her photos appeared in the old Berkshire Courier. For a time, she also worked for the Roe-Jan Independent newspaper in Hillsdale, New York, Leveille said. 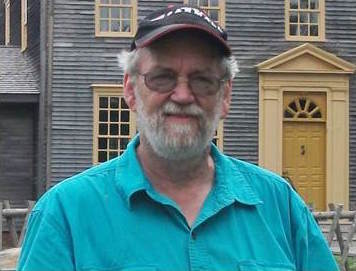 For “Great Barrington: Great Town, Great History,” Drew also wrote a profile of Tassone and reported that she was born in 1904 in Cornwall, New York; was educated in Switzerland; and that she and Domenic lived in Williamstown before moving to Great Barrington.

Dom was from southern Italy and was an avid dog aficionado and kennel club founder who often combined his love of dogs with his talent for photography. “At one time, the Tassones owned a brother to one of the movie Rin Tin Tins,” Drew wrote. 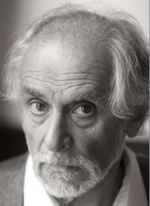 Another former denizen of 292 Main St., author and humorist Danny Klein, also recalled Tassone as a “free spirit” with a great sense of humor.

“I would visit her periodically because she looked like my mother,” Klein recalled. “I used to call her ‘mommy.’”

Klein added that Tassone had “an easy laugh and was very warm and friendly.” But Klein never got to see Tassone’s work firsthand. “She never showed me any of the photos. She always seemed quite busy cataloguing.”

Klein also noted that Great Barrington had an abundance of talented photographers, including not only Tassone but Victor, whom the late Edge contributor Scott Christianson described as “popular figure around town for forty years — jaunty, good-natured, kind and ubiquitous — a true everyman’s paparazzo in the Berkshires style.” 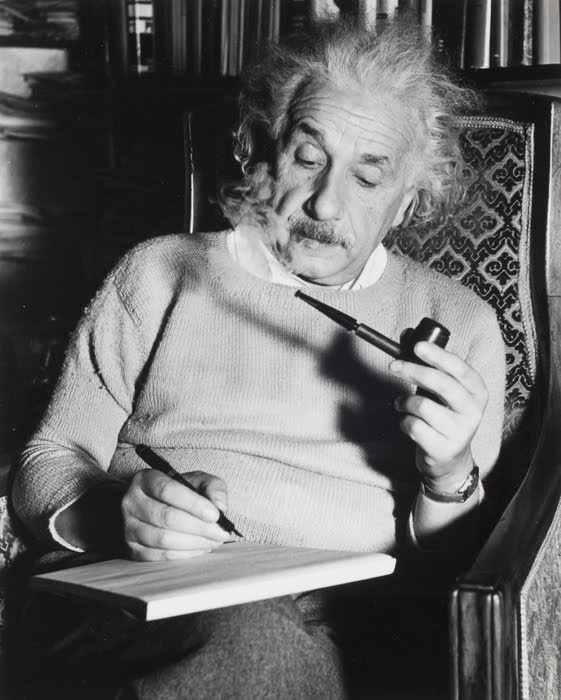 Interestingly, when Christianson and his family first moved to Great Barrington in 2012, they lived in a Dresser Avenue home formerly occupied by Lucien Aigner, whom Christianson immediately began researching as a possible subject for a documentary film.

The Hungarian-born Aigner, who moved to Great Barrington in 1953 and opened a portrait studio, was described in his 1999 New York Times obituary as “a pioneer in candid news photography in the 1930s whose best-known photographs include one of a rumpled Albert Einstein in front of a blackboard.”

So what has happened to the postcard, which will surely become a collector’s item? Laurene returned the next day and said her boss told her to take it far away from the dead letter office to the ultimate place for collector’s items in the town: the Great Barrington Historical Society.

— Lucille Ball
Read next: SOUL SUPPORT: How can we make space for our desires, our fears, our outrage our dreams?