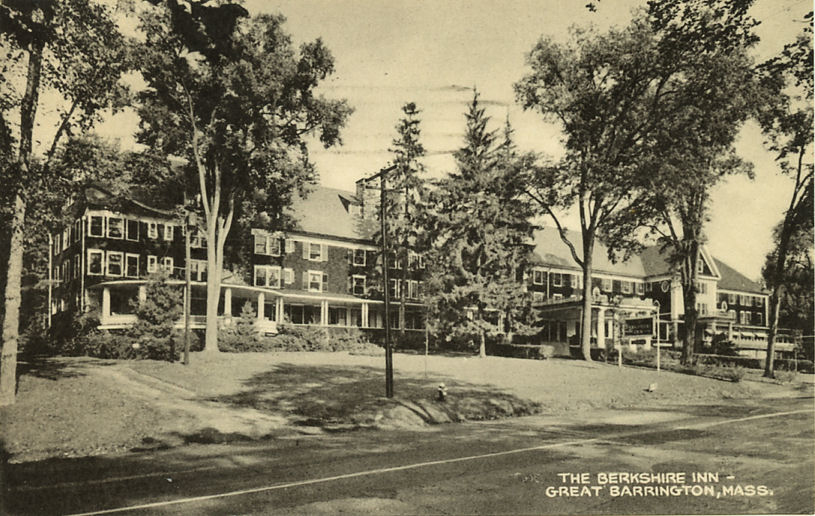 Great Barrington prospered in the last part of the 19th century. Mills were busy producing paper and textiles. Merchants drew customers. Farms sent milk and butter to outside markets. The railroad brought in summer visitors. But there weren’t enough homes for the rising middle class.

Developers raced to keep up with demand. On the hill west of Main Street, Hollenbeck and other avenues were going in, houses were going up, folks were moving in. The factory-owning Russell brothers, Parley and Asa, owned considerable acreage on that side of the New York, New Haven & Hartford tracks. Asa’s place (still there), diagonally across from the present train station, included land on both sides of Castle Street that continued through the village and out to Seekonk and Alford. Parley’s house (moved slightly but still there) was in the center of a large estate, reached by a long driveway from Maple Avenue.

There was public pressure for a better way to reach the Berkshire Heights interior. The grade-level Castle Street/railroad crossing was extremely dangerous. The solution seemed three-fold: close the grade crossing; build a pedestrian tunnel; and build a below-tracks passage for carriages and wagons through the Increase Sumner property, south of St. James’ Episcopal Church.

Taylor omits mention of a curious twist that could have changed the street and the complexion of downtown considerably.

As the Selectmen rushed to put together a town meeting warrant item in 1894, Malcolm Douglas, editor of a Saturday morning weekly newspaper called The Berkshire News, complained the public didn’t know enough about the plans. There might be a better idea, he wrote. The Selectmen, he suggested in the paper’s Aug. 25, 1894, issue, “forgot or overlooked some points in the matter that are quite important points and could not have escaped them had they taken as much time to consider the matter that Grover Cleveland has to sign the new tariff bill.”

For starters, on one small point, Douglas said Sumner Avenue would be the best name for the street, not Berkshire Avenue, as was then proposed. But he looked at the land damages (the amount the town would pay property owners for taking their land, not only from the Sumner estate, but the Ward L. Lewis for his coal sheds and the small company that ran a direct-current generating station that supplied downtown with electricity). The overall cost, an anticipated $18,000, was too high, Douglas said.

“In addition to this heavy expense, an awkward angle in the street where it joins the road on the other side of the track must fall at the west entrance of the tunnel,” he said.

Douglas worked up a head of steam. He commissioned a surveyor — by the elegance of his map, it was Joseph W. Curtiss, who had not long before opened an office in the old Mahaiwe Block on Castle Street. The map appeared in the newspaper’s Sept. 1 issue. The proposed new street, the News said, would extend from No. 1 on the map to No. 2, joining another street, No. 3 to No. 4, that would connect with Castle Street. The town, Douglas said, should consider shifting the new, 45-feet-wide street slightly south, starting at No. 5 and going west, as it would require a lesser cut into an earthen bank and a shorter stone retaining wall. The crossing at No. 6, Castle Street, just above the yet-to-be-build old fire station, would be closed.

Douglas noted that a projecting wing of the Sumner house, a carriage garage and hostler’s quarters, would be cut off and a barn and stable in the rear removed. As a historical footnote, when Mary Burghardt Du Bois worked for the Sumner family for a few years in the 1870s she and her son, William Edward Du Bois, lived upstairs over the carriage shed.

Encouraged, Douglas in the Sept. 15 issue published another map and finally revealed his real scheme. The town at the time not only needed a new street, it needed a new library. The old library on Main Street near Dresser Avenue had outgrown the tired old Thomas Ingersoll house.

Why not, Douglas proposed, put the new street on the south side of the Sumner property, squeezed tight against Caleb Ticknor’s new Berkshire Inn? Then, in the sliver of land between the new street and Ward Lewis’s place, built a new town library. Great idea, he thought.

Terrible idea, we can easily say more than 100 years later. It would cost more, not less. Where would carriages have parked in the 1890s, much less automobiles in the 2010s? And where could an addition be placed, decades later, without tearing up the street?

“The erection of a tasteful and substantial library building on the location would certainly add very much to the appearance of the central portion of the village,” Douglas insisted. “We should then have no less than five handsome structures in a row, in the block between Castle street and the proposed new street, occupying the most elevated and attractive section of our principal street.”

As we know, this plan went away. Taconic Avenue was built as expected — though not for several more years, as the Berkshire County Commission had a say on the construction of railroad underpasses, the whole had to be designed, bid out and built, and so on. Just like today.

The railroad built a new passenger station in 1900, a small triangle of land between that building and the new street becoming Great Barrington’s smallest town park. St. James purchased the Lewis property and built a parish house on the south side of its existing building in 1911. Mary Mason bequeathed money to the town and a new Mason Library was constructed on the same lot as the old one in 1913.

All turned out well in the end.